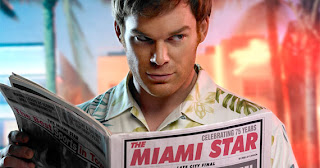 Police procedurals. YAWN! But if you make the cop super-scientist a murderous psycho, will that spark my interest?


Behind the Assumption: A cliché subverting black comedy about a serial killer who kills other serial killers, just the sort of thing my twisted brain could twist around.
Previous Experience: The premise intrigued me as soon as I heard it, and I caught an episode, heavily edited for air on CBS (clearly not the best way to watch it).
Results: The concept is so good, I think the producers and what not would have had to try to screw it up. Instead of trying to screw up, they focused their energy on making a black comedy, and that surprised me. I wasn’t expecting Dexter to be so playful and absurd. While obviously dark, the show makes a strong effort to have some fun with its trashy pulp foundation. Dexter skitting around putting on a show of eager, cheerful normalcy is at least as fun as the perverse reptile-brain thrills of him on the hunt. I guess I’m just a sucker for a good joke about secrets, especially secrets that can kill!
I love the absurd, and Dexter wisely doesn’t back down from the absurd. There’s a lot of fun to be milked from the image of our monster grinning around work passing out donuts. Better is the look on his face when he realizes he can glean relationship advice from his latest victims, a pair of married killers. Did I also mention I’m a sucker for absurdly-sourced advice? I am.
Dexter’s greatest accomplishment, though, has to be making the police procedural amenable for a rarified jerk such as myself. Every time Dexter the character twists pseudo-science to his own purposes and thumbs his nose at the law, Dexter seems to thumb its nose at the plethora of acronymized cop shows on TV today. Of course, The Wire does the same, smarter, more thoroughly, and in the end more effectively, but there’s fun to be had in the blunt way Dexter goes about it—the middle finger rather than the reasoned discussion.
Yeah, that’s right, I like Dexter because it’s mean.
Least Sexy Moment: The Deb and Agent Lundy relationship. Yuck.
All-Stars Shoe Sighting: None come to mind, they don’t seem a very Dexter shoe.
Posted by Kel V Morris at 5:55 PM