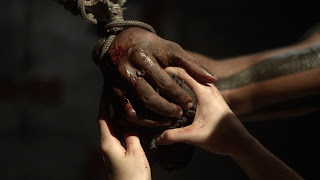 “Down here there’s nothing but woods.”


So, I was wrong about my guess of how populous the Ark is by a whole lot, by almost an order of magnitude, actually. It doesn’t house 10,000, it houses a bit more than 2000. But then, we really only got an exact count here, it’s not like Battlestar, where there’s a whiteboard keeping count. What there is like Battlestar is Drunk Ass Ellen Tigh showing up as Diana Sydney, joining Mr. Gaeta as Sinclair on the Ark.
There’s more than just a pair of actors connecting the show to Battlestar, which is another thing that grabbed me about it right away, as the Ark story has all the stuff I thought was cool about Battlestar—the desperate struggle to survive with limited resources, the study of politics and morality in such circumstances, the grungy, broken down aesthetic—and none of the stuff that drove me nuts about it—the Cylons who invariably gloated that every apparent set-back was all according to their idiot Plan, the wheel-spinning ambiguity, the fact that apparently we were talking about very literally about God the whole time. And we get more of that cool stuff as more of the ramifications of the culling become apparent.
Through Diana we learn just how deeply the political and class resentments run through the Ark, which has only been an impression and implication so far—way back when, Bellamy suggested “the privileged do the work for a change,” but those resentments start having a more tangible effect. Diana’s very existence tells us a lot—she held the chancellorship before Jaha, to whom she lost an election, and represents the Ark’s working class, who still trust her enough to bring their grievances to her. It’s a vastly more complex situation that initially seemed to exist on the Ark that the culling brings to the fore. While the parade of volunteers was a noble act of ultimate sacrifice, it isn’t an unalloyed one, or one that everyone has accepted, especially when its unnecessariness comes to light. As the majority of the 320 came from that working class, and we are reminded of how Kane told Jaha a hundred or so volunteers were rejected because they were too vital to operations. Abby also has her sentence commuted not because she was correct, but because she’s a doctor and they need her, which is not a mercy that was afforded the seamstress Ms. Blake. It’s a far more complicated and thought-out situation than the Ark initially seemed.
Also far more complicated is the person most crushed by the revelation that the culling was pointless, Kane, who of course was its most eager proponent. This eagerness for mass murder, his conflicts with Abby, and his habit of being flanked my fascist minions obviously made him seem Evil Dez, but that nickname becomes outmoded here. He’s devastated, almost broken by guilt over his role, claiming for himself the largest portion of blame, even though the rest of the council all agreed to it, which, you know, are hardly the actions of a power-hungry one-dimensional villain. What we have instead, is the story of someone whose assumption they needed to take the dark path to survive (“make the hard choices” again), and was led astray by that belief. Kane becomes one of the show’s very best characters, which would probably be a shocking thing for anyone who had only seen him glower and whisper-snarl through the pilot, but it starts with this episode.
We should probably be grateful that Buffy ended before torture swallowed up so much of our cultural mental space that just about every genre work felt obligated to consider its ethics, because a Ripper moment or two aside, it’s really not something the Scoobs seem all that likely to think is a good idea. The chuckleheads of the 100, though? Yeah, of course they’d turn to torture right quick, not realizing it’s an awful means of answering their most pressing question: “Why are they killing us?”
Along with the need to consider torture throughout the aughts and beyond obvs, came the need to at least seem to present some critique. Was it effective, but at what cost? Was in ineffective because the victim will simply say what you want to hear? Etc. The 100, in addition to the usual critiques of the moral, ethical cost, offers this—it’s especially futile and pointless, when some people have lived such hard lives as to render any torture one might devise trivial. And judging by the implacable steel of Lincoln’s gaze, he’d been living hard enough that none of the childish cruelties any of the 100 could devise would break him.
And yet, they try, and each time they fail to get the information they want, they’re driven to further and further depravities, and by the time Raven is jabbing Lincoln with live wires and screaming about Finn’s imminent demise, the show gets to the heart of the matter—torture is a brutish act of desperation, and thus one of fear. It can never be suitably objective or dispassionate. But once they’ve sunk to those depravities, they can’t just rise above them again. Clarke trying to tend to Lincoln later doesn’t undo that she oversaw his torture earlier, and Octavia, who solved the problem without inflicting harm, is more than happy to put her in her place: “For the record, you didn’t save Finn. That was me.”
The show isn’t exactly saying empathy in the answer, that’s a bit too simplistic. What it is saying, though, is that the proper response to cruelty, whether inflicted by others or the universe itself, is not more cruelty.
Posted by Kel V Morris at 6:36 PM