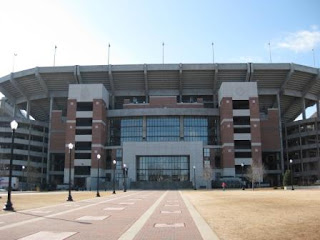 I’ve never been to the Deep South before. Layovers in Atlanta’s monstrous airport hardly count—the airport is virtually a city unto itself. The furthest in I’d been before was Mt. Vernon, Virginia. The South, for sure, but still three or four stone’s throws from Washington D.C. So, no, I’ve never experienced the proper South, but being an American, the notion and the legend of it rests deep in my bones, just like the notion and the legend of the West rests deep in the bones of friends who’ve never actually been there.


Tuscaloosa, Alabama can’t obviously cover the whole sweep and breadth of legend, or even the real span of the South, but it certainly lives up to a few of the expectations I had about this place. The parts I spent the most time in were very much a modernized version of Gone With the Wind, with Sorority Halls where there was Tara, and illegal immigrant groundskeepers in place of Old Mammy. Being just a passer-through and not a resident, I can just sit back and be amused. That’s the great advantage of travelling through. I couldn’t help but find amusement in the refracting of history through a present day funhouse mirror. Maybe my own disconnect from my local history is to blame.

Modern buildings, sleek and slick sorts of structures don’t seem to exist on the University of Alabama campus. There are new buildings, no doubt, but everything has the veneer of the old style about it—columns and brick, very picturesque, even if the year etched in stone in the front is 1994. Even the new dormitories present this illusion that these buildings have been here since the days of old. The structure below serves no actual purpose beyond holding the garbage and recycling bins, and the building past reminds me of nothing more than Independence Hall. They sure look old, even if they aren’t.

This hearkening back, though, feels an intrinsic part of the place, for better or worse, as well it should. Plaques across the campus mark the four buildings that weren’t burned down in the Civil War. It’s a place that rebuilt a sense of its past before, very appropriate that they’d continue to do so.

Previous adventures in the Virginia didn’t exactly reach far, but the heroes of that place were evident. Robert E. Lee and Stonewall for some, John Brown for others, they were still clearly marked. The shadows of the past I saw in Tuscaloosa, though, seemed to revolve much more strongly around a nebulous notion of old Southern gentility, rather than the Confederacy. I didn’t see a whole lot of Stars and Bars, though I’m sure I could have if I’d looked. But, really, I just get the sense that sort of thing takes a backseat to a new folk heroic narrative for the people of Tuscaloosa. These people have their football, and they have it in a way above and beyond anything I’ve ever seen. Show Ramses the stadium, and he would weep, for Paul Bryant must have surely been the mightiest of pharaohs.

The totality of football in that city would be impossible to express. Instead, I’ll share small vignettes. Before the looming edifice of Paul Bryant Stadium is what I called the Walk of Heroes—bronze figures of coaches past who led their people to victory on the hallowed ground within. An empty spot waits there, hopeful and expectant, ready for the next demigod to take his place. Stores devoted to kitschy University of Alabama themed crap exist roughly every half-block. Any establishment within walking distance of the temple grounds will be festooned with images of sport generally, and images of Pharaoh Bryant predominantly, be they weathered photo, yellowed news clipping, faded magazine cover, or reverential painting. Rack upon rack of his distinctive houndstooth cap can be found in the bookstore. Students, I’d dare to say most of the students, wear team gear year round. Despite football season having been over for two months, there were still cars painted with admonishments for the Tide to Roll. Blocks around the stadium are given over to condominiums, known as “game day condos”. “In the shadow of Paul Bryant Stadium” their signage proclaims. They are purchased by families who come in for game day, and for game day only.