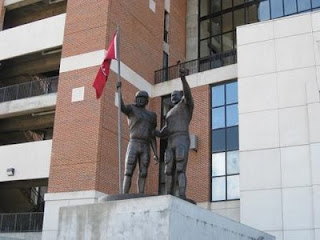 One doesn’t just pack up and visit Tuscaloosa on a whim, I went with a purpose. And perhaps the legendary South loomed so heavily on me because of my purpose. I went to see Neil Gaiman, and just as it was my first time in Alabama, it was apparently his too, which is a shame. The monumental temple that is the Paul Bryant Stadium, the enshrined bronze statues of coaches past, the feverish cult to the Crimson Tide, or the great statue of Vulcan overlooking the city of Birmingham (complete with the Vulcan Mini-Mart) seem like natural sorts things to pop up in American Gods. Alas.

I went to the main reading, and the Q&A session the next day, which he also turned into a small reading. Perhaps back in the earliest Sandman days he lived up to the expectation of a reticent, gloomy Brit-goth, but at this point he’s a casual, confident presence, eager to share, which he did.

He shared 3 stories, a novel excerpt, and I lost count of the poems, an invaluable chance to hear a wide breadth of work from a man with thematic concerns, interests, and dark humor I feel kinship toward. Disturbing won a shout vote to determine if we’d start disturbing or goofy, though I’m not sure I agree with the designation: a love-letter from a stalker human statue certainly had its share of ookiness, but it also was undeniably funny. Or maybe I’m just sick.

Anyway, that was followed by a creepy little modern gothic horror story, a little bit of Poe set in an English coastal village in the off season. It was, he explained, inspired by the very specific thematic requests of an anthology. He finds those specific requests much easier to handle than wide open fields, and I have to agree—it’s easy to get lost and flounder without a nice anchor.

The most popular story of the evening was the goofy piece, entitled “Orange”. A bit of a mental game, the story is structured as responses to an unseen questionnaire, and obviously mined much humor from what went unsaid to we the listeners, but assumed had been said.

Most of what he shared in the Q&As, culled from two gargantuan piles of note cards, were the sorts of writing platitudes I’ve heard before. This time, however, they came from Neil Fucking Gaiman, giving them an extra weight and gravity not afforded when spoken by someone we’re assured is a pro in the Millcreek Conference Room 1 or Salt Lake’s Red Lion Hotel. Stop Revising. Be Sure to Finish. Just Do It. Good advice from anyone, but here spoken by an undisputed master.

He spoke of ideas as confluences. It’s an elegant image, capturing a notion I’ve circled about many times. See, an idea is hardly sufficient, it really takes a few ideas coming together to create…something. An image, a thread, a line, god forbid a whole scene. Seems obvious, but I don’t think you have to look far across the pop landscape to see often how rare it is.

A question I was charged to ask on behalf of my book club prompted an interesting digression. I asked if he’d read Freud’s essay “On the Uncanny”, having been assured by those who had the answer could only be Yes, so many themes and notions delineated in the essay were key to Gaiman’s work. Turns out, he hasn’t, but he perhaps should, seeing how often it came up. Then, he backpedaled. Perhaps he ought not read it. He explained that he’d only made it roughly a third of the way through Joseph Campbell’s Hero With a Thousand Faces before realizing that if, indeed, archetypes unconsciously appear, it may be best to just let them unconsciously appear. And honestly, it’s hard to think of a better way to grapple with a theme than to just kick back and let it do its thing.

All in all, a successful adventure. I went to the capital of Deep South Football Country to kneel before the throne of a British goth fantasty novelist. The unlikeliest magic, for sure.
Posted by Kel V Morris at 5:44 PM