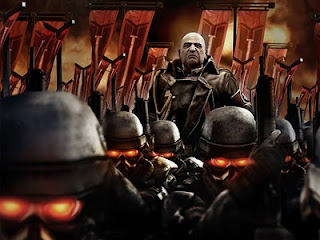 Killzone 2 was a game that never really got a fair shake. It was initially overhyped by Playstation people, accordingly scorned and derided by Xbox people, and the ensuing war between the two spilled over until it was scorned by everyone. And that was before it was even released. Once it was, things got even weirder. Fans attacked negative reviews, and were in turn attacked, making this bizarre pile-up of backlash against backlash against backlash—practically a backlash singularity. The game itself never had a chance to be taken on its own terms.
But I quite liked it on its own terms. While no great masterpiece, there are some aspects of KZ2 that do strike me as genius, and with the sequel due out this very month, it seemed like I should go over them. Perhaps I'm over-intellectualizing, but that's my prerogative, isn't it?

Killzone fiddles in two playgrounds at once—the outlandish sci-fi shooting people game, and the gritty military shooting people game. As Sev, soldier of the vaguely UN-ish, vaguely NATO Interplanetary Strategic Alliance, you are deployed to Helghan, home of the Helghast, descendents of human colonists hardened and shaped by their harsh world, and united under the banner of Emperor Visari, who led his people on a violent invasion of nearby Vekta, and the ISA has come to remove him from power. A bit of stunning art direction and design, the Helghast are inspired by the Nazis. The end result: WWII by way of Aliens, with a little Iraq War thrown in for good measure.

While Killzone 2 is the only game I know of to address Regime Change so directly, there are games a-plenty that use WWII as a backdrop. They do so, however, from a very American perspective, as they are largely made by Americans, a culture a pond away from the build-up, and the mindset of the time, for whom that war is largely a parable, and they understand the war on those terms. Developed by Dutch company Guerilla Games, Killzone brings a markedly European perspective. 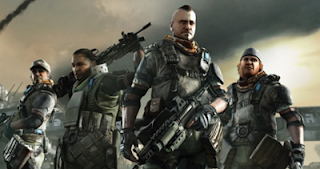 Killzone 2 is striking in its visual sense—practically Futurist in its aesthetic. The urban hellscapes of Helghan (hey!), sharp angles, squat buildings, harshly geometrical, long horizontals, towers of unadorned concrete and steel, it is a Futurist playground, loaded with the beauty of industry and machines, as the Helghast arrive in sleek dropships whose engine whine vaguely evokes hawk cries, or squat APCs like battering rams with saw blades to cut through the city, and deploy the fearsome ATAC, a flying robot with a tank’s weight and a dragonfly’s grace, built by humans but animated with an alien artificial intelligence—one just smart enough to kill. 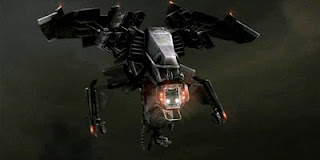 Of course, the Futurists, far sighted blokes it turns out, were the original action movies junkies. Lovers of movement, a machine at rest was not as beautiful as on fulfilling its purpose, and the greatest beauty to them was in war, for these lovers of violence. Truffaut said a true anti-war movie was impossible, but it seems the Futurists knew it first. The FPS genre strikes me as  Futurist—I think they’d blow their minds, an entire form devoted to recreating explosions, reload actions, and the implements of battle, then subsuming the audience in this simulacrum of raw combat. I think they’d look at Killzone 2, combining a style influenced by their design in thunderous volume and relentless intensity, and see a masterpiece of a type many didn’t. Of course, interesting visuals are a dime a dozen in games—I wouldn’t think as highly of the game as I do if it just offered the same ugly-is-pretty look most FPSes trade in. Likewise, the Futurists weren’t just artists with odd notions of violence. They were also fascists, and Killzone 2 offers a unique perspective on that too.

Most modern FPSes traffic in fighting against some variant of fascist, while simultaneously being the sort of soft Michael Bay fascism that’s in vogue these days—very American (perfectly fine in the former, rather obnoxious in the latter). Killzone 2, however, is a game made by a culture that has had a far more profound struggle with fascism than we. Trekking through the levels, it’s clear the game understands not only what fascism can compel people to do, but understands how it appeals as well. Sustained Helghast iconography at every turn helps build this atmosphere, whether through harsh and angular recruitment posters, or the occasional maxim (“Violence has its own economy, be thoughtful and precise with your investment.”), but it is the person of Emperor Visari that makes the strongest case. Visari (played by Brian Cox), though only seen in person at the very end, is a pervasive antagonist, a magnetic voice calling out from Stalinist radio boxes at every turn, staggering masterworks of fascist rhetoric. He’s terrifying—no cartoon dictator, there is no question why his people follow him. From the original game:
And here, from the second:


It’s not just boilerplate war-speak, all the brainwashing touchstones are there—the fear, the unity, the scapegoating, the ego-building, the destiny. “You are oppressed, and that oppression has made you special. We are beset by inhuman enemies who do not understand us and seek to destroy us—they are responsible for your hardship. You are part of a whole vastly greater than yourself, and I am that whole. You are strong, and I am your strength, and I have used your strength to build more. You are not you, your are Us, and Us is Me. History is with Us. We have a Destiny, and I am the expression of Our Destiny.” By the time he promises to “drench our ancestors’ graves with their blood”, who would not be ready to kill and kill and die for this man? By comparison, the ISA (in my favorite joke, staple multiplayer modes as Control Point and Capture the Flag revolve around propaganda speakers) seem callow, and in far, far over their heads.
This builds a cold, intellectual sympathy towards the Helghast—we have understanding but the game never clears them of wrongdoing. They are not likable, or piteous, they remain frighteningly destructive, vicious monsters, but they were human, and we understand what made them monsters. Killzone 2 may have rendered war in loving detail, but it is markedly ambivalent about the practice. As the game progresses, Helghast resistance gets more and more desperate (and audacious), while ISA losses mount and their attitudes calcify, until everything comes to a head in the final scene.
It seems to me that, while undeniably setting up a sequel, Killzone 2 is grappling with its ambivalence in that last scene, and trying to make us to do the same. It’s wise enough to know that a shooting game featuring a lightning gun shouldn’t be offering answers, but it does raise some intriguing questions. Portrayals of war will always seem exciting, so why not embrace that? War in actuality makes people do awful things, so why not embrace that too? War is the perpetual motion machine, it seems to be saying, that feeds itself at the cost of lives destroyed and values compromised. A new fight is on the horizon, but Sev doesn’t charge again unto the breach. Exhausted by the futility, he seems ready to just wait for the inevitable. I can understand why.
In the meantime, maybe I’ll do a few rounds of multiplayer.
Posted by Kel V Morris at 11:20 PM