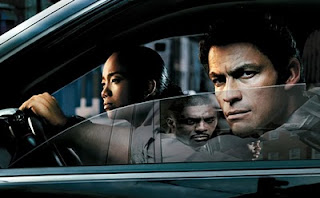 Browsing Instant Watch, I’ve found that I have effectively strip-mined the notable works available. I don’t think I could muster much to say about, say, Prison Break, no matter how much Netflix insists, yes, insists it is along the parameters of my test preference paradigm. Along the way of this project, some of my favorites came up. But three shows, three peerless shows, remained unmentioned. Before putting the project behind me, I’d like to discuss these three, shows which, to me, represent the height of the medium, the three to which I aspire in my own writing. The last, the definitive statement on living in urban America in the early days of the 21st century. David Simon and Ed Burns’ The Wire.

Yes, yes, if you’ve spent any sort of time with me at all, you know my opinions on The Wire—it is nothing less than the greatest show ever made, and everyone should watch it. But it’s true. A relentless study of systemic failure, and multi-faceted contemplation on our attitudes toward work in the modern day, The Wire is a perfect distillation of many talents under the guiding voices of Baltimore police reported David Simon, and Baltimore Homicide detective Ed Burns. Together with veteran TV directors, renowned crime novelists, and a veritable army of gifted actors, they created a true epic of modern America that touches the highest and lowest corners of our society, treating each humanely, and more importantly creating understanding.
The Wire has effectively killed the cop show for me. They’re just so trite and inconsequential in comparison. Why don’t they build five intricately woven seasons, each adding a new layer, a new system of failings adding to our urban problems? Why don’t they deal with the issues they claim to address with the gravity and seriousness they deserve? Why is their morality so black and white and unchallenging? Obviously, because it’s easier. But it seems in poor taste to take the easy path when dealing with the destruction of the inner city, likewise with their portrayal of cop and criminal as forces at war. When you start talking war, soon everyone is acting like warriors.
The Wire never forgets that its characters are people first, slingers, muscle, cops, kingpins, thieves, junkies, working men, politicians, teachers, or reporters fourth or fifth. This is, I think, a theme of The Wire as important as its examination of systemic breakdown—though these characters, all of them, are at the mercy of whatever system they have bound themselves to, they still have an unmistakable human stain that cannot be touched, no matter how broken they are, and these stains can sometimes threaten to bring the systems, no matter how shambling and monolithic, crashing down. For some, it’s integrity, decency, or dedication, likable virtues, but for others it’s a terrifying rage, boundless frustration, or a rapacious will to be on top, failings no less important, for they are still human, and the show respects that.
As much as The Wire is powered by rage at the failings of America, it is also powered by this respect. It respects the men and women who wear the badge too much to reduce them to virtuous cartoons ready for propaganda posters, so it gives time to their ego, their obstinacy, their frustration, and reveals the complicated culture of political expediency, insufficient training, and institutional laziness that are greater challenges than any criminal. It respects the men and women driven by desperation to the drug trade too much to reduce them to easy caricatures of scheming goons, so it gives time to their cracked codes, their awareness, and the actual genius required to run a drug enterprise, and while the show never approves of their actions and never shies from the havoc they wreak, it keenly understands why they do what they do. That the police cannot do their jobs without manipulations and compromise, and that the drug dealers could be brilliant business leaders given the chance are treated with equal sadness on the show.
As ugly as it can get, though, The Wire is still remarkably funny and uplifting. Not all the character find grace, but they all have the potential. As intractable as our problems are, they cannot keep us from cracking wise and finding some peace.
I’ve often been tempted to simply write at length about these individual characters and their performers, and now that I’m done with this project, I just may. Of the many indictments The Wire offers, its final one only became apparent after it ended—the dearth of quality roles for black actors. The Wire brought many singular, unknown talents to the fore (with some actual Baltimore figures—Homicide Detective Jay Landsman, former Commissioner Ed Norris, the Real Life Avon Barksdale Melvin Williams), and was a rarity on TV—a show with the racial profile that matched the city it was portraying. As with Deadwood, I have eagerly followed The Wire’s cast, but doing so has often been rough going, watching actors capable of such heights only used as bit-player thugs. Wendell Pierce and Clarke Peters rejoined David Simon on Treme, Lance Reddick is a joy on Fringe, and Michael K. Williams recently moved to Boardwalk Empire. Idris Elba is rapidly becoming a B-movie icon, so at least he’s working. Felicia Pearson has been justly turning her remarkable life into a cottage industry. In a just world, however, Andre Royo would not be wasted on a wordless Terminator cameo, and Seth Gilliam wouldn’t play a simple type his Carver was decidedly not on Law and Order. Sonja Sohn, J.D. Williams, Wood Harris, Larry Gilliard Jr., Chad Coleman, Robert Wisdom, Robert F. Chew, Gbenga Akinnagbe, Jamie Hector, Maestro Hall, Jermaine Crawford, they all deserve deeper roles than they have been given—and when they find them, I will be there to sing their praises. Until then, they’ll have to settle for being key players in the greatest TV show known yet to man.