The Right and the Wrong Guy for the Job 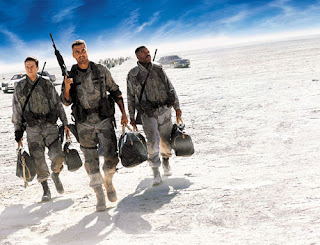 Sometimes, going through my Netflix queue is like travelling back in time. I usually can’t pinpoint actual events or anything, but I can see clumps of movies I added when I was feeling up, feeling down, feeling unwisely nostalgic, in the mood for challenging things, in the mood for utter trash, times when I was catching up on great 2007 films I missed, and so on. Sometimes, though, I can pinpoint something more specific—I’m obviously getting to a part of my queue built while I was playing Red Dead Redemption, because there is a whole lot of Sergio Leone in the weeks ahead. Right now, though, I’m clearly in the spot made when director David O. Russell was going to be making a movie out of Uncharted, my most treasured of current games. I’d never seen a Russell film, which isn’t too surprising as he hasn’t made many, so I was curious to see what made him the first choice.
The first film to arrive was 1999’s Three Kings, which instantly made the case that Russell was perfect to adapt Uncharted, and wholly unsuited to such an endeavor. How so? Let’s see.