It’s That Sort of Day: Ode to My Favorite Companion 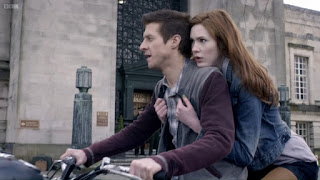 The danger in sharing an ongoing story is the risk that you’ll have to put an asterisk on your assessments. Most of You’ll Love This covered shows that were done for this reason—they could be definitive, which was reassuring, because invariably quality goes down over time. Settings become strained, stories get repeated, tricks lose their effectiveness, characters wear out their welcome. Right around 4 years, it seems, shows would be well served to start thinking about how to close things out, while the sense of freshness is still a recent memory, before this inevitable entropy infects the shows bones. For a show to enter my favorite phase in its 5th (or, depending, 47th) year? Why only the most remarkable man in the universe could accomplish such a feat!
I covered Doctor Who at the end of Series 4, including the specials that completed the journey of the much beloved Tenth Doctor, which seemed like a pretty good point to take stock. Both a new show-runner was being put in charge, and a new actor would assume the role of the Eleventh Doctor—chances were, it’d be a whole new show. Miraculously, it turned from a show I enjoyed into a show I adored. Retro camp got dialed down in favor of something closer to Henson-esque whimsy, serialization increased, plots increasingly became intricate time riddles, character bits and witty jokes abounded. It was a show that featured a more nuanced, interesting and often funny take on the Doctor (who now had an absolutely killer musical cue), accompanied by my absolute favorite companion. With the recent end of series 6, it seems that companion is leaving the stage. If that’s the case, I’m taking the chance to extol the virtues of the Doctor’s greatest companion: the Pond-Williamses. Unfair to call two characters one companion? Too bad!

Modern companions have largely riffed on Rose, the first companion of the revamped era, and Amy Pond, in that respect, isn’t much different, putting the prickly, damaged inner-life of the Rose-contrasting Donna into a young, pretty, infatuated Rose package. But she’s also very much a Wendy Darling for the 21st
century—appropriate, given the storybook and fairy tale tenor of the new series. A victim of time-travel wackiness, Amelia first encountered the Doctor as a lonely 8-year-old in crisis one night. He promises to return in 5 minutes, only to actually return 12 years later—an interim that saw Amelia take to calling herself Amy (less fairy tale) and endure years of therapy to convince herself he was just the imaginary friend of an overly active mind—arriving the night before a wedding she doubts she’s ready to go through with. Then she floats freely in space still wearing her nightgown, in case you missed the point. 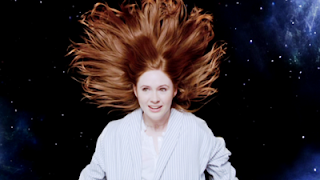 On her own, Amy Pond would have been a strong contender for my favorite companion (indeed, “The Beast Below”, “The Time of Angels/Flesh and Stone” are some of the show’s best episodes in my estimation). She’s both a free-wheeling flirty fun sexy space adventuress, and a willful, fascinatingly troubled presence on her own journey, unafraid to call out the Doctor on his bad behavior and unwilling to play by his rules without question, once trapping him with a car door and his own tie until her questions were answered, plotting to remove him from a mystery that would lead to an impossibly destructive choice, and openly telling him that she couldn’t trust him because he always lies (“If I always told the truth, I wouldn’t have to ask you to trust me.”).
But Amy didn’t come alone--eventually, fiancé Rory joined her. Rory is also very much a reaction to Rose, in this case Rose’s own boyfriend Mickey. I always felt bad for Mickey. At the end of the revamped show’s first episode, Rose thanks him before running off with the Doctor. What for? “Exactly,” she says. Ouch. I was rather shocked they brought the character back, but they did, however the character never quite recovered from that initial characterization—Rose’s boyfriend by virtue of being the best option, a placeholder until the Doctor could swoop into her life, leaving Mickey the Idiot (so dubbed by the Doctor) to bumble along behind. 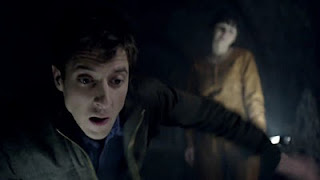 And Rory at first seems cast from exactly the same mold, though he seems, at least, to realize how badly he’s about to be Zaphoded. He does, however, show some early virtues, gathering all the pieces of the puzzle in Series 5’s inaugural episode, even though the picture didn’t make sense. Brought along on later adventures, Rory often seemed reticent when it came to danger, but that what quickly became apparent was that his reticence only related to others—Rory was more than willing to throw himself into harm’s way, he just wanted to keep everyone else out of it, an instinct that led to him sword fighting with a broom, getting killed a time or two, and challenging the Doctor’s attitudes and behavior. Rory proved himself clever and outwardly exasperated but inwardly cool-headed—strangely, an everyman-of-action—and someone the Doctor valued and could rely upon. Quickly, it became apparent that Rory was never a Mickey (after all, in that first episode Amy is not with fellow Leadworth resident Handsome Jeff), he and Amy are together for specific reasons. They just both needed to figure out what they were.
This makes Amy and Rory quite distinct from previous companions, and I’ll just say frankly and flatly how. Their journey isn’t about proving they can be effective sci-fi sidekicks, but effective adults, which they discover through sci-fi adventures. Can Amy deal with her past traumas and become the awesome woman she’s clearly supposed to be? Can Rory overcome his self-doubt and see that he didn’t just luck his way into the woman of his dreams? These are much more resonant dangers than cyberman death-rays—and just our luck, here we get both!
But that’s all macro-level sort of stuff, on a micro-level, Amy and Rory were my favorites for simply being well written individually, together, and with the Doctor, an overload of chemistry, character, and interplay to toy with. There was the aforementioned car door interrogation, and the broom fight, but there was also Amy’s simple standard for what constitutes reality, and Rory being slapped for being a little too imaginative regarding time travel’s potential, and their joint plea that if their room is going to be redecorated, could it please get rid of the bunk beds?
If Series 6 is the end of Rory and Amy’s journey, they will have suffered some pretty deep losses, but will have also proven themselves ready and able to handle the rest of their lives together. As great as they were, I’d like it if they could stay there. Doctor Who survived cancellation and a decade and a half of non-existence, it can survive moving on from my favorite companions, too. Who knows, maybe even more favorites are yet to come.
But if we checked in with the Pond-Williamses every so often, I wouldn’t complain.