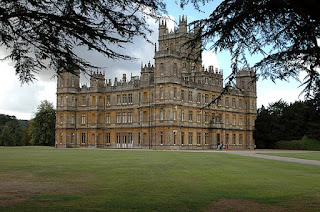 When trapped under a single roof, the human beast is laid bare. Hate, violence, rage, desperation, scheming, vying for a scrap of power, and love are all pushed to the extreme when there is no hope or escape from that single edifice, but nothing trumps the maintenance of the social machine.
Yes, I’ve been watching Oz, HBO’s seminal prison-set drama, and Downton Abbey, the BBC’s immaculate period piece, at the same time. See, because HBO doesn’t let Netflix stream their stuff, I’ve been getting Oz DVD’s through the mail, one at a time, like a savage.


But what to watch while I waited for the next disc? Well, everyone had been talking about this Downton Abbey show, no harm in checking it out.
The contrast couldn’t be more stark, but the similarities couldn’t be more striking. But rather than get all pretentious about it, I thought it would be fun to track the ups and downs of some beloved characters from both, week by week. Unfortunately, it seems I’ll only be able to get two weeks out of this, since series 2 of Downton ends next week on PBS. But whatever, I can do it twice for fun.
So, here we stand, at the first three episodes of Oz Season 3, and the last two of  Downton Abbey Series 2. Note, the only intended connection between these characters is how much I like them—though there may be some thematic connection, it’ll mostly be coincidence. 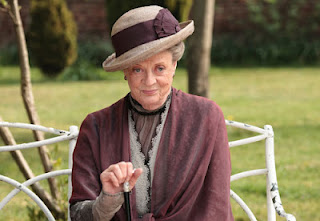 It’s going to take something superhuman to unseat the Dowager Countess from the top of the heap. Whether deploying her powers for good or evil, it’s a joy to watch her manipulations at work, and she always gets the best lines. After last week’s hilarious play against Isobel, this week she was a force for good, instantly perceiving what was going on with Mary and Matthew. Admirable canniness and candor, she remains Downton’s reigning bad ass. 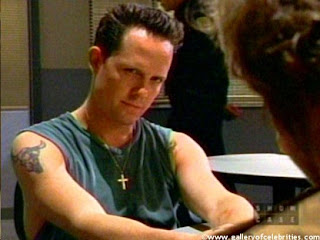 By contrast, Ryan hasn’t done much of the scheming and shit-stirring I love, because he’s so busy protecting his brother from Schillinger. He seems to think he’ll be able to use “his” CO the same way the Brotherhood used theirs, which I find endearingly dumbass. But his angry explosions at Vern remain highly entertaining, his fixing Cyril’s fight subtle and effective, but he needs a plan to deal with that Nazi fuck more permanent-like. Can’t wait for that, and he better do it soon if he want to hold this top ranking. 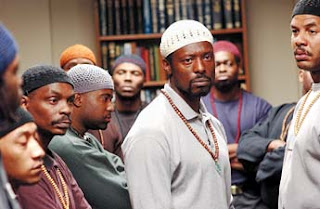 Brutality cases, hunger strikes, and widow seductions, Said’s been keeping busy, and to my delight, making the most enemies by far. He obviously continues to piss off the Admin Staff with his legal actions and hunger striking, but he’s also butting against both Vern and the Aryans, and his own Muslim brothers in being a bit flirty with Ross’ sister. And he maintains his mighty serenity throughout. Fascinating to watch, solidly #2. 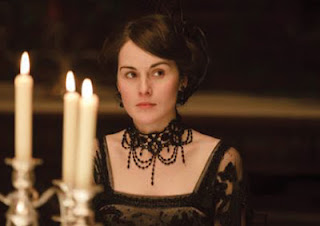 With the Great War over, Mary the Super Bitch returned with a vengeance, and it was awesome. Mary got off some fantastic, bitter, passive-aggressive zingers, almost as good as the Dowager Countess’—almost. As great as her evolution into stoic majesty during the war years was, I did miss her being all acerbic, and this episode seemed to promise combining her old fun bitchiness with her new hardened fortitude. She easily holds this spot. 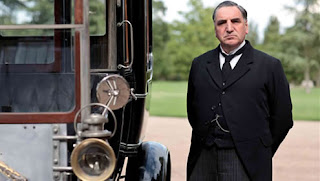 Upright Carson. He won’t abide bribery and snitching, rightly perceives Sir Dick’s lacking character, and remains at Downton, as he should. We get to see just how vital he is, when he’s felled by Spanish Flu, leaving good ole  Mosely in charge of the wine service, which he hilariously botches. Never showy, always solid, that’s Carson. 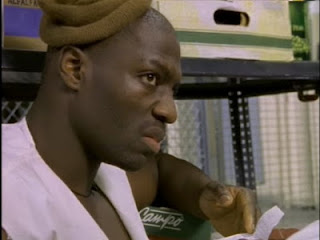 Adebisi had me worried, as he seemed a changed man—all muted and remorseful, like he’d turned over a new leaf and wanted to earnestly help patients in the AIDS ward. Could the frightening, crazy Adebisi, Lord of the Drug Trade, be gone? But then he pricked rival dealer Nappa with a tainted needle and gave him HIV. Cold. Genius. And a shockingly cunning play from a guy who hasn’t needed to be cunning. 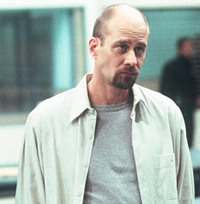 Much of Tim’s time is taken with Said, with the brutality case, and Said wanting to fast for Ramadan. He’s in a particularly fallible mode—while I think he has a point about Said having food in his cell, I don’t think he really understands. He starts working out how to deal with his Nazi CO problem, but then that gets taken care of. And his habit of getting frisky with the staff gets him in trouble—maybe he should look to Lord Grantham for tips. 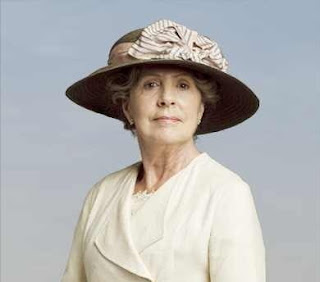 I don’t think Isobel got much of a proper scene, beyond reacting to things going on with Matthew, but she still made her presence known. The Dowager Countess may have won the battle, successfully deflected her into working with refugees rather than maintaining Downton as a permanent hospital, but Isobel may win the war, as Lady Cora, bored out of her mind, joins the refugee cause. Nothing as brilliant as last week’s sick burn about “a life of changing clothes, killing things, and eating them”, but she still endures. 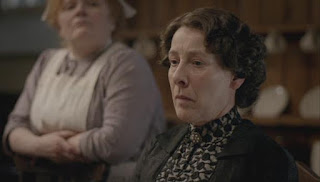 Mrs. Hughes continued to earn good will, remaining steadfast in the Ethel story, being superhumanly supportive despite holding really medieval attitudes toward sex. To boot, she and Carson had some of their always welcome scenes together, commiserating over how heavily the Crown of the Servants weighs. 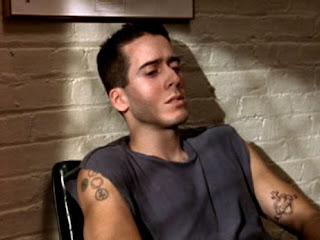 Alvarez managed to be the locus of several stories, now that he got himself locked in Solitary. He’s been denied his meds by the new corporate contractor running the health care, which certainly enhances his depression, and may be making him paranoid. Maybe he’s only imagining the guards aren’t feeding him, but they’re more than happy to beat his ass at the slightest provocation. He’s only got Father Ray to count on, and I’m not sure how, or even if, he’ll get out. 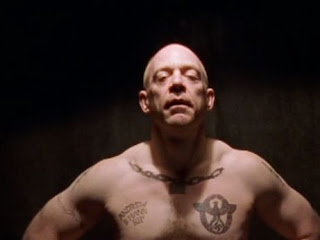 After the fireworks of the end of season 2, Vern is pretty low-key so far—he engages in some light torment of Busmalis, which the old man defuses by being a bit weird. But otherwise, he just remains an ominous force, ready for future malevolence. And man, it’ll be some malevolence. 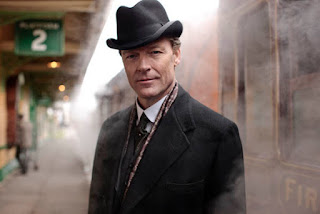 Sir Dick, on the other hand, is malevolent right here and now, attempting to hire spies being now added to his psycho stalker portfolio, and offering dubious help when the Spanish Flu strikes (“I could drive the car!”) under even more dubious motive. Boo, Sir Dick. Boo. 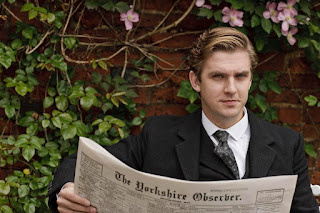 Matthew comes into these episodes strong, with a miraculous cure (or, more aptly, revealing Dr. Clarkson’s ineptitude). His stance in his talk with Violet is idiotic, but noble, but idiotic. By the end, though, he goes into full bore drama queen overload—he’s not  exactly wrong, but the histrionics are a bit much. Tip: if a sentence requires you to start “I know it’s a cliché, but-“, don’t finish it. 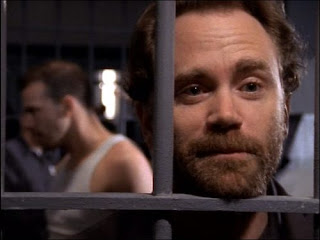 Beecher, however, comes roaring back into things and stays there. Once released from the hospital, he sees the chance to get some terrifying revenge on the Nazi CO, takes it, and gets away with it. He gets Keller to turn rat in the hope of a little forgiveness, and then denies that forgiveness. And the way he eyes Schillinger’s son as he first walks onto the floor speaks to more vengeance to come. Not bad for an upper-middle-class milquetoast. 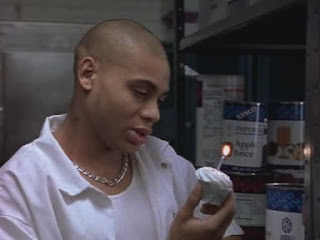 Kenny didn’t make the list, simply because he didn’t get to do a whole lot—he’s insisting he be called “Bricks”, and continues to deal with an Adebisi shaped void in leadership while navigating his deal with Nappa and the Italians, but he just got overshadowed. 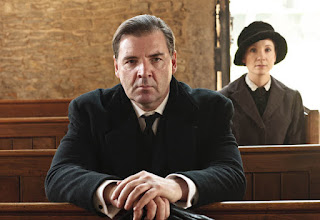 Bates and Anna, on the other hand, remain mired in a truly terrible storyline that just refuses to end, even with Anna taking the reins and trying to close it herself. It’s tragic, because Bates and Anna were so great in Series 1. In theory, I like the idea of a story emphasizing how challenging divorce was back in the day, but this is not the way to do it.

How will things stack up next week, as I continue on through Season 3, and the Downton Christmas Special? We shall see.
Posted by Kel V Morris at 6:53 PM