Gun Nerds are the Worst Nerds 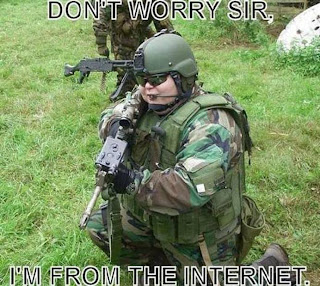 For every human creation or concept, there is a nerd who has devoted some chunk of brainpower subsuming every available nuance. And a lot of them are eager to share. Most of the time, I’d say that’s great. Lit nerds, movie nerds, music nerds, game nerds, all can provide context and information that enhances enjoyment. Computer nerds fix our stuff. Car nerds can give invaluable consumer advice. Nerds are instrumental elements of our society. Yet, not every nerd encounter is a positive one. All of us, even we nerds, has had the experience of watching something unspeakably awesome, like, say, Guy Pierce and Shannon parachuting to Earth from low orbit, only to have some physics nerd say “The structural integrity of their suits wouldn’t have made it past the thermosphere. I don’t have a problem with dumb movies, but I hope someone got fired for missing that detail.” You can’t help but think “Jeez, shut up, nerd,” even if you are one. But eye-roll for eye-roll, annoyance for annoyance, pound for pound, none are worse than gun nerds.


Where nerd-dom is more or less defined by obsession with minutiae, none can rival the trivialness of the gun nerd’s minutiae, nor their umbrage when said minutiae is not hewn to.  Movies pull from a full spectrum of makes, models, and manufacturers, making some elaborate sequences obnoxious Where’s Waldo pages with their fetish objects. “You don’t know what kind that is? How can you not know?” But I do know what it is—it’s the plot device that is allowing Neo and Trinity to reach Morpheus. Who gives a shit beyond that? When the music nerd tells me the Chemical Brothers are on the soundtrack I can seek them out. Hell, the Star Trek nerd is at least likely to mention a silly name. But there’s no enrichment by knowing the difference between a Volffmacht .58 Sturmstrassen from a Bolger Fabrique Polar Camel. It’s not even a historical oddity or a feat of human engineering—it’s just dumb.

But that’s hardly what makes them the worst.
Like I said, it’s when the minutiae aren’t hewn to. Nerds on a whole love this, love the feeling that our special knowledge is special. But when Denzel shoots his 9mm Cluckernaut and drops eight baddies, when everyone knows the Cluckernaut only takes a seven round clip unless it’s modified which that one clearly wasn’t, when he pumps his Secundo shottie before he fires rather than after, duh, it doesn’t seem like special knowledge. It just seems like bullshit.
But that’s hardly what makes them the worst.
It’s when it’s assumed that knowing a bunch of calibers and going paintballing translates to anything other than knowing a bunch of calibers and knowing how to paintball. When the problem with the World War Z trailer is not that it seems to dilute an interesting and unique modern genre classic down into the standard mainstream gruel, but that obviously everything would be over if they just gave all the soldiers DPs and some Gumby rounds recently developed by the Dingle Group. If the gun nerd were there with their H8R 88, things would be so much different.
No, things wouldn’t be different. The assumption otherwise is simply infuriating. Rare is the Star Trek nerd who thinks themselves qualified to fly a spaceship, but all too common are the gun nerds who assume their fetish items have given them competence. And unlike a proper fetish, theirs have none of the cultural cachet, rich tradition, or artistic value of a medicine bag or a voodoo doll.
I’m not opposed, however, to all forms of gun nerditry. After all, I have a favorite gun. It’s the M-98 Widow, a single-shot sniper rifle of considerable power, with quite the story behind it. The Widow first saw service during the Geth Uprisings on Rannoch, when it was first raised by a geth against its oppressors. Despite its significance, the Widow was not commonly used by either the geth, or the quarians, though it maintained a fearsome reputation befitting a gun designed to destroy tanks. Eventually, the weapon caught the attention of the Earth Systems Alliance, which contracted several companies to develop a version whose recoil would not break a soldier’s arm, without sacrificing the rifle’s considerable firepower. By the time of the Reaper Invasions, they had succeeded, and the M-98 Widow saw service on nearly every front in the galaxy, from Council Space to the Terminus Systems, and even on the Citadel itself. In the hands of a skilled sniper, the Widow could strip a Banshee’s barriers almost instantly, and rendered deadly Atlas mechs moot. 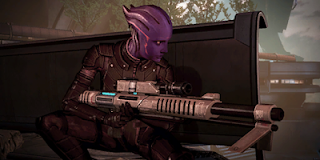