A Lecture on Lectures 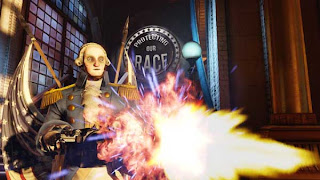 The gentlemen of the website Giant Bomb recommended that Bioshock Infinite come with a warning: “Give yourself two hours between completion and bedtime.” Having just beaten the game the night before, at about 1:30 A.M., I think this is a great idea. I spent most of the night laying there, contemplating what I’d just experienced, identifying all the pieces, examining and considering them, and pondering over their gestalt. A lot to unpack, but the easiest and perhaps best take-away is quite simply this: Infinite is a game of rare and deep power. In the midst of all this thinking, I looked up what some others were thinking, dropping by a spoiler thread. Pretty quickly, I had to leave, because—well, I’ll be honest, I read some criticisms of certain themes that were infuriating. Infuriating, primarily, because they were directly connected to how juvenile just about everything is these days, not just games.


I want to gush for a minute, because Bioshock Infinite is the sort of tale we desperately need to see more—where the question “What is it about?” takes more than a sentence and isn’t just a recitation of plot. All stories have themes, obviously, no matter how thin that story is. Maybe they’re slapdash, poorly developed, or entirely accidental, but they’re there if you’re willing to take the time and look. Admittedly, even in games I like a hell of a lot, they can be hard to find. Infinite, however, is a meal so rich, it may just make you sick. What is Bioshock Infinite about? Well, at the most basic, it’s about the most hackneyed of game tropes and clichés: there’s a girl in a tower, and she needs to be saved. But it’s about regret, remorse, consequence, and choices made or not made. It’s about social tension, social injustice, social upheaval, social warfare. It’s about labor rights, and how societies are built and destroyed. It’s about American history, how it was written, and how it gets rewritten, and how it still speaks to and reflects on us. It’s about faith, and how faith gets used and abused. It’s about memory and perception and time. It’s about violence, and how violence gets justified in a society and personally. It’s about how mass movements treat individuals. It’s about power. It’s about so much, I could go on all night. There’s one thing, though, that some have said it shouldn’t be about: race and racism.
Plot-wise, this is what’s going on: it’s 1912, and twenty-something years previously, the United States built Colombia, a massive floating city, a tribute to American greatness and ingenuity, which has gone rogue under the guidance of self-proclaimed prophet Zachary Comstock. A mysterious man hires former Pinkerton detective and cavalryman Booker DeWitt (the player character) for one task—infiltrate Columbia, rescue a mysterious girl, Elizabeth, who is being held there, and return her to New York City. Naturally, things get complicated.

One critic noted that the game seemed to be about our ever deepening political divisions, specifically the joke about letting Texas break away and watching the inevitable happen. I couldn’t help but note that the game takes place a century in the past (initially, the game was to come out in 2012), and features the veteran of a dubious military action—seemed to me the game was as much about modern America than the America of days gone by, a notion driven home by the themes of inevitability and cyclicality.
I wouldn’t say the game has Action Sequences as much as Violence Sequences. They’re panicked, unnerving affairs, loud, confusing, and uncomfortable, not the least because they’re shockingly graphic and sometimes feature antagonists you may not want to fight. This has led to some more criticism and sneering, which I don’t feel like addressing here. Suffice to say, the ease with which Booker wreaks havoc is part of the point, a point which seems to have sailed over the heads of some. But anyways.
The team behind Infinite wanted to make a historical game, and clearly had a great time building it, from the iconography of the posters and banners, to the boardwalk and brick architecture, to the thinking prominent in the era. Columbia is a perfect Gilded Age hangover, a city in the thrall of American exceptionalism and imperialism, Social Darwinism, and the Great Awakening. It’s a place and culture that would find desegregation unthinkable, see anthropologic phrenology as utterly valid, regard Kipling’s “The White Man’s Burden” as the truth. Racism is a big part of that culture, which is a problem for some. 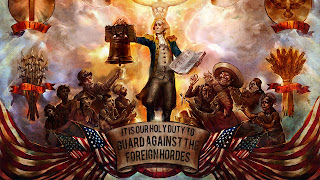 Words can’t properly convey what it’s like to experience the racism of Columbia, fitting for the period often called “the nadir of American race relations.” It’s appalling, pervasive, and stunningly vicious, but purposeful. The reveal of this sickness at Columbia’s heart is shocking and the strength of it revolting. Before that reveal, there’s a clear undercurrent of dread beneath the idyll, and after, it’s everywhere, from racist caricatures, to propaganda puppet shows, to signs in the casino staff locker rooms reading “THE PATRONS ARE YOUR BETTERS, TREAT THEM WITH RESPECT.” There are segregated washrooms—when you enter the wrong one, the black man washing his hands begs you to leave before he gets in trouble.
Post-apocalyptic in games are very common (the previous Bioshock was one, in a manner), but Infinite reveals itself as the all-too-rare apocalyptic game. As you play on, you witness Columbia’s apocalypse step by step, but there’s no sense of a fall from grace, or anguish at lost glory. There is an inevitability in watching this society rip itself apart at the seams, because the stitching was rotten in the first place.
The critique that pissed me off went thusly: no character directly states this racism is bad, thus, it shouldn’t be there. If some racist little peanut-head were to play Infinite, they’d think Columbia was a great place.
To put it delicately, I think this is complete and utter horseshit.
There is no reason to make concessions to the stupid, base, and ignorant.
Those of us who are smart, and willing to be challenged deserve works that fulfill our needs. We shouldn’t have to sit through the story pausing to tell us things that are already ridiculously plain. The small-minded shouldn’t dictate what we get to appreciate. Let those of us who are adults, with fully-formed critical faculties use them, and not be spoon-fed difficult subjects.
Similar things were said of the best movie I saw last year (or nearly last year, anyway): Zero Dark Thirty was pro-torture, because no character says it’s wrong…except for that President of the United States guy. Ok, fine, it was a little more complicated than that. A little. But what the criticism boils down to is the film shows torture working, and no one says it’s wrong. 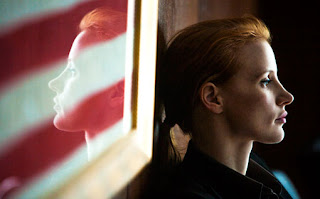 The film didn’t need anyone to say torture is wrong. A character directly stating such would have been insulting. After sitting through 45 minutes of cruelty and brutality that at long lost nets a name that only one person finds significant, the only response to the film plainly stating how cruel, brutal, and of dubious value it was I can grasp would be a sour, deflating “Yeah, I fucking know, I watched it. You showed me.”
And when the film shows that torture working (a dubious claim to begin with), what is it working towards? The more effective repudiation of torture comes at the end, with the film’s climactic, nerve-wracking anti-climax. As full of tension as the predetermined events of the raid are, the moment Bin Laden lies dead on the floor is deflating, not triumphant. Simultaneously, the film asks a question and answers—“Was this worth it? No, it really wasn’t.”
Smartly told stories shouldn’t be expected to punctuate their intentions for the sake of the dumb. Once they do, they’re no longer smartly told, and we should be demanding more of those precious smart tales, not fewer. We rob ourselves of great things when we do. 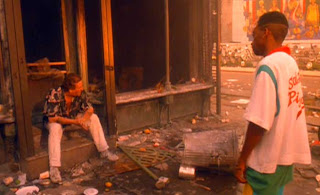 Like a lot of people, I thought about Roger Ebert over the past few days (indeed, this piece is largely a tribute to the man), and in doing so I ended up perusing some of his old reviews—among them, one of my favorite films, Do the Right Thing. By the time I made it to Spike Lee’s breakthrough, well after its 1989 release, the controversy surrounding it was not much more than a memory lingering in its aura, but I was very well aware that it was a controversial film. When I finished watching…well, I wasn’t too sure what to think, except that I’d loved it and I’d need to mull over it for a while. Certainly, I didn’t see how the people of ’89 thought this film would lead to mass rioting. Ebert had an idea of “how,” though:

Some of the advance articles about this movie have suggested that it is an incitement to racial violence. Those articles say more about their authors than about the movie. I believe that any good-hearted person, white or black, will come out of this movie with sympathy for all of the characters. Lee does not ask us to forgive them, or even to understand everything they do, but he wants us to identify with their fears and frustrations.

In my estimation, Lee did exactly that, brilliantly, and without shouting that’s what he was doing. The people who wanted him to dumb it down and be more obvious could shut up then, and they can shut up now. The grownups are talking.