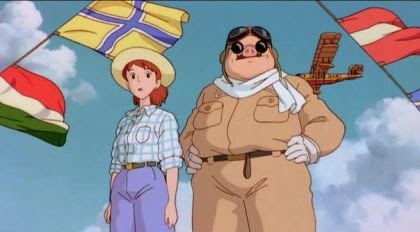 “The adventures of ‘Porco Rosso,’ a veteran WW1 pilot in 1930s Italy, who has been cursed to look like an anthropomorphic pig.”


Fucken finally.
Porco Rosso could be the weirdest work from Miyazaki, which might sound like a bold statement when one considers the toxic jungles and Catbuses. Just how weird could Porco Rosso be, comparatively? Consider the crawl, typed out in the opening: “This motion picture is set over the Mediterranean Sea in an age when seaplanes ruled the waves.”
Nothing too unexpected.
“It tells the story of a valiant pig,”
Uh, okay.
“who fought against flying pirates,”
Now we’re talking!
“for his pride, for his lover, and for his fortune.”
…what?
“The name of the hero of our story is Crimson Pig.”
…what?
Now, a dogfighting pig making his living as an aerial bounty hunter in late interbellum
Europe may not sound like the weirdest, but it’s all in the approach. If Porco Rosso were just a fanciful adventure, it wouldn’t be all that odd, in the grand scheme of things. But in the midst of the fanciful adventuring, some Lost Generation drama unfolds. Imagine a Casablanca where Rick is a literal pig, and all the other characters just roll with it. Furthermore, he spends most of his time not dogfighting, but wrangling with his Old World sexism as gender dynamics shift from the pressures of the Great War. It features wackily inept goons and a swaggering Texan flying ace who just sold his screenplay, but also a lady engineer directing a factory of women workers who have to replace the absent men, and a wistful lounge singer who has lost three husbands to war. And in the middle of it all is Porco, a moody, brooding, apolitical, taciturn veteran in the Hemingway mold, haunted by the senseless violence and loss that stripped away his innocence. And he’s a pig. It’s really bizarre.
There are, I have no doubt, many papers to be written on why and how Porco is a pig. It’s mentioned as both a curse and a choice, but mostly, it’s an epithet, with all sorts of words it might be paired with—sexist, traitorous, disgusting, etc. What is made clear is that his pigness in inextricably tied to the lingering trauma of combat, and the film shows us that isn’t something that can be undone with a kiss.
Posted by Kel V Morris at 6:57 PM