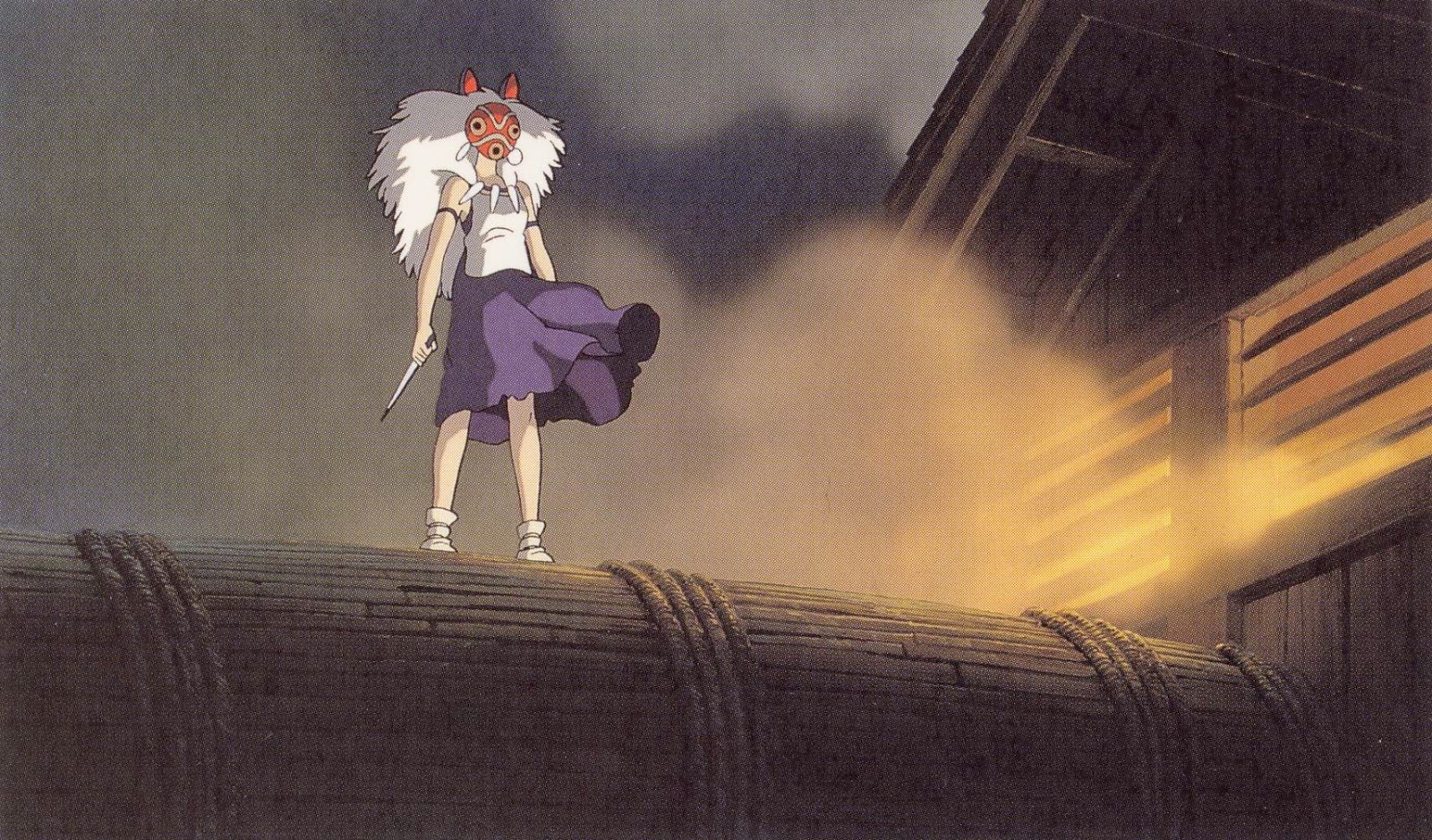 “On a journey to find the cure for a Tatarigami's curse, Ashitaka finds himself in the middle of a war between the forest gods and Tatara, a mining colony. In this quest he also meets San, the Mononoke Hime.”

Just so you know, this is one of my favorite films. And I’m hardly alone in that.
When we speak of Miyazaki’s environmental themes, or anyone’s environmental themes really, I fear there’s a tendency to be reductive and simplistic. Nature is Good. And nature is good. The majesty, grace, and awe in the film’s landscapes, inspired by the real forests of Yakashima. But the man’s view, especially in Princess Mononoke is more complex—fitting for his darkest work. The sense of the natural world in Mononoke is not one of hippy platitudes, but a much more ancient and primal notion. It’s a beautiful thing, but immense, dangerous, and indifferent. It’s something we shouldn’t fight against not because it would be bad, but because such a fight is ultimately futile.
Why would anyone engage in such a futile fight? Well, for one, the ancient gods who constitute the opposing side are violent, territorial, and wrathful, even as they are also noble and majestic. Mostly, though, the humans make war on nature because they are greedy, ignorant, and short-sighted. Still, the film exhibits the same sympathetic humanism that pervades Miyazaki’s work, so most of the humans are funny and charming, and in the end, they aren’t stupid—or at least they aren’t so stupid they don’t recognize the need to change their ways.
Ultimately, Mononoke is the story of a war, which is possibly Miyazaki’s chiefest other thematic concern. It’s his most violent film, but suffused with a pacifist’s horror at violence—bloody, frightening, and traumatic for the smallfolk who fight and die at the behest of untouchable and distant powers. Much of the film’s conflict stems from the Emperor, an unseen figure whose childish desire for immortality we only hear about second-hand, while the ancient gods fight for their own survival, but also in the name of the Forest Spirit they never seem to have spoken with, who makes inscrutable decisions. But it’s the desperate animals and the outcasts of Iron Town who have to do the bulk of the dying.
Humans cut down the forest, so the animals attack the caravans, so the women long to avenge their husbands, and so on. Ashitaka may receive his wound Nago, but Nago received his wound from Eboshi. Violence breeds hate, and in Mononoke hatred is an infection that is deadly for both the infected and everyone around them. “See with eyes unclouded by hate,” the wise woman admonishes Ashitaka as he begins his quest to heal the infection that is killing him. While the intent is for him to observe what is transpiring in the west neutrally, it becomes wisdom he attempts to impart to Okoto, to Eboshi, to Moro, to Jigo, and mostly to San, the eponymous princess of the spirits.
This summer has shown us quite starkly how much we need that lesson, and how little we have taken it.