In Asphalt, Nitrous, and Rubber: The Fast and the Furious (2001) 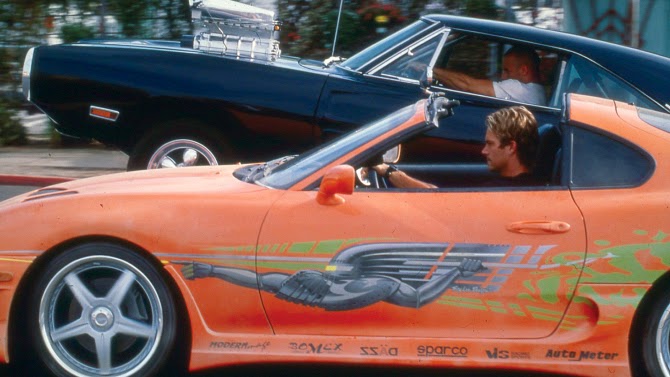 “That railroad crossing up there is exactly a quarter-mile away from here. On green, I'm going for it.”


Let’s get this out of the way: The Fast and the Furious is not a knock-off Point Break.
To be such a thing, it would have to deviate from Point Break.
Actually, that’s a joke for effect, kinda, but we’ll return to the kinda later. For now, let’s languish in the hilarity of how closely The Fast and the Furious hews to Point Break. A mysterious gang of esoteric sports enthusiasts plagues the law-abiding world, and only an undercover square (and his supportive older handler) can reveal them and stop their rampage. To that end and after much practice, the square infiltrates the subculture of this esoteric sport, and quickly hooks up with a lovable bunch of outcast rascals. The square is drawn deeper into the esoteric sports world by a woman connected to (but slightly apart from) the rascals, but he’s drawn in even more by the charismatic leader. After haranguing from his superiors (who are adamant the charismatic leader is not to be trusted), the square fingers some obvious baddies who are revealed to be red herrings. Recklessness from the charismatic leader leads to a dramatic escalation of violence, and the square is revealed as a cop. In the end, they face each other, but the square is now changed, and allows the charismatic leader to depart on his own terms, being too rare and beautiful a creature for prison. It’s really almost beat for beat. And I note this with amusement, and even respect—after all Point Break is awesome, what’s the use of mucking it up?
But there is at least one very important deviation, which may have just been key to understanding the longevity of the series.
Basically, unlike the dangerous gamesmanship between Bodhi and Johnny Utah, Dominic Toretto is never anything less than earnest with Brian O’Conner. He’s forthright, trusting, and never tries to play Brian, and though he is a criminal and has Brian at gunpoint once, he isn’t especially dangerous or crazy like Bodhi, who really may be a psychopath. But this isn’t simply a matter of making the charismatic leader of the misfit toys easier to like.
While Johnny Utah finds a subculture gang, Brian finds a whole world, a sustaining society with its own rules, mores, colloquialisms, and ecosystems, all made by and for those mainstream society has actively rejected. It also happens to be a world that’s pretty well integrated, populated by far more people of color than his joint FBI/LAPD operation, which has its one black guy, a stark contrast to the street race world, which has room for Hector, Vince, and Johnny Tran all at once. Is it a coincidence, incidentally, that ethnic factions only seem to come up in the operation HQ? I really don’t think so. Dom has no ulterior motives because this is his home, and it’s a very welcoming one.
This is, of course, the elephant in the room—or more accurately, it’s the elephant in the room of other big time Hollywood summer action ultra-franchises, now all straining to add some diversity. The F&F movies, especially the later installments, have no such struggle, and the groundwork was laid here.
The movie, rather remarkably, affords a lot of time to just letting us live in its world. We don’t even learn that Brian is a cop until nearly 40 minutes in—honestly, that’s pretty amazing. Until then, you could easily be convinced it’s a sports movie, where Brian is the kid with heart who Dom s going to coach to greatness. Before the big reveal, we get a lot of practice, shop talk, going to parties, and working day jobs—there’s even an inexplicable scene I love where Hector and his crew come to the shop that serves as Brian’s cover just to buy stuff.
That’s all heady stuff, though. Let’s languish for a bit in the glorious 2001-ness of The Fast and the Furious. Neon underglow kits! So many chin beards. Everything Letty wears, but especially those flame-toed boots. Edgy lesbians! Shit, son, is that Ja Rule? Nu metal and “electronica!” Probably Gran Tourismo 2! Who the hell chose these paintjobs? But probably the most 2001 thing is the modesty and restraint.
For as crazy, as gloriously crazy as the series would get, it starts off in a very grounded place—as grounded as a movie about an undercover street racing cop and an honorable street racing thief can be anyway. Their cars, while tricked out and modded as hell, are the sorts of cars you’re likely to see just going about your day. Some ominous talk of Johnny Tran’s Honda Civics (a car favored for many years by my dad) arises, a crisis is precipitated over a Jetta, and while the 10 grand price tag on mods is a lot of money, at the same time, it isn’t that much money. There’s even a digression where Dom and Brian race a Ferrari in a Toyota they rebuilt.
Mainly, though, the modesty comes from the action, which is one of the last hurrahs of the undigitized. The big draw is stunt drivers doing amazing, but simple and feasible feats. It’s simple, but cool, especially the botched truck robbery, in no small part because that’s a real guy dangling off a real truck as it really speeds down the highway. Later movies would get crazier and crazier, but (and I think a great many pretenders to the action throne don’t grasp this) you have to accelerate to tanks and safe-flails, you don’t start at maximum speed, you have to share a few Coronas first.

I Laughed: “I smell (sniffsniff)

Soundtrack Lowlight: Just because it only appears briefly in what I’d call a “music montage” (not a musical montage…maybe I should call it a “montage of music” then), doesn’t mean “Rollin’” doesn’t easily earn this spot. It pains me to learn Method Man was on this remix. Torture what indeed.
Car This Not-Quite Car Guy Would Take: I mean, Dom’s 1970 Dodge Charger R/T pretty much has to win by default—it’s 2001, and all the others have atrocious paint jobs. And it is pretty damn cool.
Posted by Kel V Morris at 8:58 PM