In Asphalt, Nitrous, and Rubber: The Fast and the Furious: Tokyo Drift (2006) 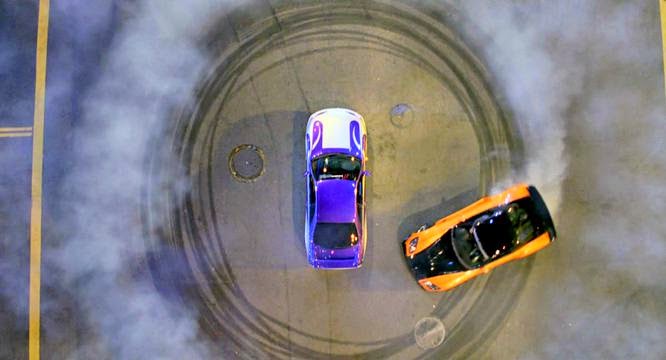 “You know those old Westerns where the cowboys make a run for the border? This is my Mexico.”


Let’s get continuity out of the way. It’s quite simple, but seems to baffle a lot of people—I actually just think they’re baffled that F&F can have a continuity. Anyway, the events The Fast and the Furious: Tokyo Drift take place after the next three movies. How do we know? Because Han Seoul-Oh does not survive the events of TD, and appears in the next three movies, culminating in the reveal of the true nature of his death at the end of Fast & Furious 6. Ergo, TD follows those other three movies. It isn’t rocket science.
Knowing that TD was nearly this strange off-shoot—or, dare I say, The Fast and the Furious Gaiden—I skipped it at first. After all, this one lacked pretty much everyone and had Bow Wow in their place? But skipping TD is a huge mistake.
TD is the first turn at the wheel for director Justin Lin, who I think it is fair to credit with creating the series as it is known and loved today. Accordingly, TD is just plain well crafted—sleek, energetic, kinetic, weighty, and minimally adorned with CG. Helping in that last regard is that the concept of drifting naturally makes for an exciting visual, rendering the experimental embellishments like the anime speed lines and the tour of engine interiors that overwhelmed 2F2F moot. There’s gravity, crashes crunch and drivers exhibit an intense focus.
But TD remains a strange beast, the least blockbusterish of the series. The points of comparison here are not Point Break or 70’s kung fu, but, as drawn by no less a figure than Roger Ebert, Lost in Translation, focused on character. Sure, it’s not as ruminative—obviously young ScarJo didn’t have to flee angry yakuza—but it’s no less keenly observed. It opens with a lengthy montage of our hero Sean’s day, awash in high school angst, frustration, and absurdity. We don’t have to wait long for some racing action, but it’s a race full of telling character details. Mainly, Sean’s kind of a garbage driver, reckless and barely in control, his primary strength being a bit of cleverness coupled with a disregard for mortality and a little bit of fair play. Then he’s off to Tokyo, where he has to learn about its culture and ways to get by.
There is always a danger in these sorts of stories of falling into exocticism (and in this case orientalism specifically) and a trope that goes by many flippant names, but I prefer Great White Man. You know the story—a white guy, disquiet haunting his soul, comes into contact with a (usually less developed) culture, adopts the strange mystical traditions of its people which he soon masters and becomes their greatest warrior. Obviously, there are unavoidable elements of this in TD, but they take such a backseat to Sean becoming enculturated to his new home, a process which he seems open and receptive to. And the movie helpfully avoids the very obvious jokes and trope markers—Sean seems to take pretty quickly to the food, and Han tells him “there is no ‘wax on wax off’ to drifting.”
Most of our big blockbuster movies these days are little c conservative if not Conservative—they’re all invaders posing existential threats to Our Way of Life, and the brave few who do what is necessary no matter what the Brass has to say about it, so on, so forth, this attack eerily reminiscent of 9/11 needs to be stopped. Granted, the invaders are usually alien robots or the like, but still. There remains an “us v. them” aura, and Them are foreigners, even foreign hive-mind alien robots. F&F feels different, though. One comedian noted with amusement that no matter where they are, the crew is able to find the “group of douchebags under a bridge” racing. Amusing, but also true and significant. LA, Miami, Tokyo, and points beyond the series would visit later, they all have racing douchebags under bridges, and as different the ways of those douchebags may be, the crew can find kinship there. After all, don’t we all love a kick-ass car chase?
TD does take at least a little time for a little rumination, as we also get an elegiac scene of a line of cars drifting and dancing their way down a mountain, under the moonlight and flanked by trees. Liberation and elevation through nature and machinery, yeah, I’m going there, the sequence is, dare I say, Miyazaki-esque.
And what of the elegy of Han? What of his mournful cool, the funerary philosophical authority with which he carries himself, the loss that animates both his connections and his indifference? There’s probably a story there.

I Laughed: The last minute need to dodge the plummeting carcass of Takeshi’s car—a prelude of the kind of insanity that was to come.

Soundtrack Lowlight: BAWMDIDDYBAWMDIBANGDIBANGJIPPYJIPPYJIPPYSHURAJOMDABOOGIE! That’s right, there can be only one choice here, and that choice is named Kiiiiiiiiiiiiiiiiiiiid Rock.

Car This Not-Quite Car Guy Would Take: At last, we’re approaching the age of paintjobs that aren’t eyesores. Not perfect or tasteful, Lord no, but not screamingly hideous. So, tough call between Han’s Mazda RX-7 or Takashi’s Nissan Fairlady 350Z. Would I have clue one what to do with them? Not a one.
Posted by Kel V Morris at 6:11 PM