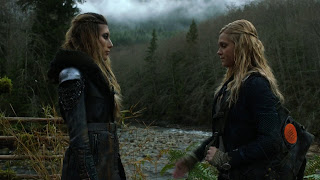 
If you came to this expecting me to make a grand connection between Buffy and The 100 in this episode considering it introduces a character named Anya played, no less, by someone who was on Whedon’s Dollhouse, well, sorry, I’m not because that’s about all there is to the connection—Grounder Anya and Anya are only alike in being awesome, and even that connection isn’t that strong because spoiler alert Grounder Anya gets overshadowed in awesomeness while Anya remains the sun itself.
That business concluded, henceforth when I refer to “Anya,” it is Anya, Lord of the Grounders to whom I refer.
As mentioned previously, this is a show that can burn through a story when it chooses to do so, and few examples highlight this more starkly than Diana Sydney’s coup, which moves pretty god damn fast, going from having its existence confirmed, failing in their initial plan, achieving their objective and possibly destroying the Ark in the process, and dying a fiery death over the course of a single episode plus a little bit of change. Granted, the coup was actually first established in the very first episode, what with Bellamy’s attempted assassination of Jaha, and it’s had an influence on things without truly revealing its nature, but it only truly emerges now, and it doesn’t fuck around. There are many factors that led to the briskness of the coup, but time stands out most to me. Back before the turn of the decade, Battlestar featured a very similar storyline (the similarities being a coup, technically a mutiny, and taking place in space), but played it out over three episodes. Obviously, neither approach is superior, but it’s hard to imagine, in this day and age, any show being able to invest that much space.
And so, Sidney and her conspirators move swiftly, first trying to bomb the Council and instead getting Kane’s mom, some of those Councilors who never said much, and possibly some adorable moppets. Their ultimate aim is to get aboard the dropship, so when their bomb fails, they just seize it, consequences and inevitable damage to the Ark be damned. Like so much on this show, though, you can’t entirely dismiss them, because they aren’t exactly wrong in behaving so recklessly and desperately—the big shocker of a few episodes ago was that there is only one dropship, and it only can carry 700 or so people, leaving somewhere around 1300 stranded in space, and the big shocker here, off-handedly revealed, is that the Council was proceeding with the launch anyway. Kane, we discover from his very excited mom, will be on the “first” ship down to the ground. Jaha characterized their plight as one of a sinking ship with insufficient lifeboats—the fight over the seats was pretty inevitable, and as horrible as the actions of the coup conspiracy are, it’s hard to blame them for not wanting to die in space.
But as always, there is motive and there is action, and the haunting image of the Ark’s lights slowly sputtering and fading until it’s consumed by the black is a pretty strong repudiation of their choices.
To say nothing of the fireball that rises from the dropship’s crash. More on that much later.
But the Sidney coup isn’t alone in this episode in having some justification for their violence, if not for the violence itself. Lincoln was the first Grounder the 100 met, and we still don’t know a whole lot about him, but there have been enough clues laid about (including his infatuation with Octavia, which in between episodes has become a full blown romance) to conclude he’s something of an exception or even possibly an outcast. Grand and imperious Anya, though, marks the arrival of the Grounders as a proper force into the story, cuts right to their biggest concern—if the 100 didn’t want war, they shouldn’t have been destroying villages with rocket attacks. Clarke (who reveals herself to be adept at Quarters in this episode, and there are no aspersions cast on her underage drinking, a relief after Buffy’s loud teetotaling) stammers a bit until she figures out what the hell Anya is talking about. “The flares? No, that was a signal,” she says. As explanations go, it’s both accurate (probably, for a time there was reason to believe someone else actually did fire missiles into these villages, but it seems unlikely the show will revisit this), and incredibly lame in its content and timeliness.
On some other show, I won’t name names, Finn would make his pleas for peace and pacifism because he’s an absurd strawman who gets knocked down when those ways fail, thus all Right Thinking viewers could nod their heads in satisfaction. And the ways of peace and pacifism fail spectacularly at the Grounder-100 conclave. But despite the fact that he’s real sanctimonious about it (in a way only a teenage boy can manage), Finn’s pacifism doesn’t make him a strawman here, because he’s right, and the meeting doesn’t end in a firefight because the Grounders are a faceless horde that cannot be bargained or reasoned with, but because, as is so often the case on this show, of a confluence of bad choices deemed made out of necessity.
So unfortunately, the first meeting between the cultures ends with Clarke warning that, armed with higher technology, the Ark’s soldiers could wipe the Grounders out, and Anya informing her they wouldn’t be the first to try. You can tell by looking at her and her cohort, she isn’t lying.