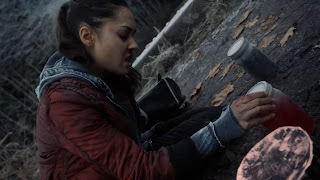 “I know who Oppenheimer is.”


As any serious student of history is well aware, the most important weapon in the European conquest of North America was the smallest—germs, of course. Colonization is a central theme to The 100, and germs play a central role in this episode, but the show isn’t a strict allegory of the colonization of North America, and further as we’ve briefly mentioned, as much as it’s about colonization, it’s also about refugees. Besides, it wouldn’t make much sense of the Ark people, who’ve lived for three generations in a controlled environment that gets locked down at the slightest hint of a cold, and so it’s the Grounders, the natives who know the land better than the 100 do or will, who use germs to their advantage, in a way that evokes the Golden Horde’s use of the plague (come to think of it, the Grounders have a whole hell of a lot more in common with the Mongols of the Khans than Native Americans), among many others. It’s, to be sure, a horrifying tactic, widely regarded as unethical, which is admittedly, a fairly laughable thing to say about war. But it also speaks, in my view anyway, to how harsh and cruel the world the Grounders have been occupying must be for them to respond in kind. Though I bet they didn’t expect the 100 to nearly wind up shooting each other in a panic.
One element in that world would be the Mountain Men, who Lincoln mentions here, fearfully, for the first time. All we truly know about them right now is that they exist, and Lincoln is afraid of them—and if Lincoln’s afraid of them, we should probably be terrified.
As we see how Tree-crew makes war, we also get a study in how the 100 do so—obviously, they do so like immature teens who’ve never actually lived through one. Bellamy exhibits he sort of blustery bravado that seems very sensible, impressive, and compelling to macho youths. Jasper rides a modicum of fame (the narrative “Jasper’s bold action saved the day!” takes root much better than “Jasper’s lack of restraint may have killed us all!”) to maximum jack-assery. Clarke basically throws herself wholly into medical duties which is fair enough, actually, considering she’s both the only medic and one of the afflicted, though the planning meetings do clearly suffer for the lack of her decisiveness. Finn doesn’t necessarily reveal himself to be a master strategist, but he does exhibit the sort of cunning and tactical acuity that would have made him a clutch player around the D&D table. And Raven’s nearly felled by overestimating her capabilities, and more than a little spite and jealousy.
Returning to the mix is Murphy, who came bearing the plague and an ethical conundrum. Do they hold Murphy to their initial sentence, or has their circumstance and his own changed enough for everyone to reconsider? Clarke argues that ultimately the need to bolster their numbers trump everything else. But while Murphy puts on a good show of having changes his ways, torture tends not to result in good behavior under any circumstance, and his good show is exactly that—a good show that ends the second no one is watching, to Conner’s dismay. But we can come back to the faulty notion of “He’s our psychopath” later.
Maybe I looked like a crazy person gushing about bullets, unreliably, and scarcity, but I think those elements start really paying off in this episode. One thing about this show that helped endear it to me so strongly is that when it gets exciting, it gets really fucking exciting in a way that certain big budget contemporaries don’t match, and the scarcity is a huge component of that. I mean, the big climax of this episode is that Jasper has to shoot a tin can. Granted it’s full of rocket fuel, and the onrushing Tree-crew Horde is on the other side of it, but still, dude has to shoot a tin can and that’s it. But, in addition to the pressure of that charging army, and Raven being at death’s door because she tried to set off the bomb herself, a clip of duds leaves him with only three chances to do it. It’s intense as hell. And the rareness of bullets only makes them that much more potent—Jasper’s first shot misses, but the sound still freezes the charging Grounders in their tracks.
When the bomb does go off, Clarke remarks from a distance on the similarity the explosion bears to a mushroom cloud—a subtle reminder that even though these kids look like kids and cope like kids and fight like kids, but they were touched and traumatized by war before they were even born.
Posted by Kel V Morris at 6:13 PM