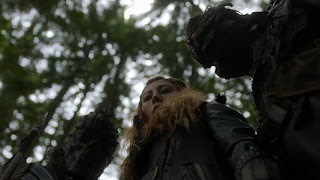 “You’re going to save everyone but yourself? That’s nuts!”


Surprise! Kane, Jaha, and even Sinclair survived! Further surprise! Abby got off the Exodus Ship before launch! She survived, too!
Of course, the Ark is still mostly dead. We’ll get back to that.
This show isn’t exactly set up for whimsy—unless you count boreal forest Road Warrior fashion as “whimsy,” which I sort of do—nor for a lot of “jokes” as codified by Buffy. Still, the show does put in some humor, like everything about poor Miles. Black humor is a type of humor, after all.
So yeah, unfortunate Miles is something of a joke introduced so abruptly it has to be meant as parody, besotted with Clarke, eager to hang with cool kid Finn, and spouting unwittingly meta lines (“I haven’t had the chance to hang with you guys much. Do you even know how I was arrested on the Ark?”), even though he’s wearing the default navies, greys, and blacks of the cast, it’s pretty clear his shirt should actually be red. His joining the band clearly says something bad will happen, and specifically it will happen to him. Taking arrows to the knee and chest (and being left for dead by Finn, by the by) is something of a punchline, just, like I said, a black one. Another surprise, though! Miles doesn’t actually die…yet.
Miles only had to be on an expedition because everyone has to desperately hunt, because all their food burned up, because Octavia and Murphy told the tender of their smoking fire not to stoke the fire so high, so naturally he did. It’s a delightfully infantile thing to have happen, and totally in character for these chuckleheads—including the fact that Octavia is now regarded as equal in disrepute to Murphy because she’s, as they crudely put it, a “Grounder pounder.”
A more conventional figure of humor is Wick, the wacky pal who is the first survivor Kane finds on the Ark. Well, I say wacky, but wacky would be very out of place on the show and extremely out of place on the Ark, he’s more cynically wry (“That bitch!” he says of Sidney, as good a eulogy as any, all things considered), but very welcome in the direness of the Ark’s current state. Natural, even, I’d say, to joke a little, because the Ark is obviously fucked—with electrical fires, minimal oxygen, hull breaches, and 60% of the population lost by generous estimates, the best plan Jaha and Sinclair can concoct is to pump air into the mess hall where survivors can congregate and gradually die. I don’t want to say the Ark had outlived its usefulness, because it certainly hadn’t, it was a remarkably compelling setting. Instead, I’d say it’s impressive that this remarkably compelling setting got eliminated before it had outlived its usefulness, and that when the time came, the writers made damn sure there was no question the Ark was dead.
Things get much less funny, even darkly funny, once Miles gets shot and Anya takes Clarke and Finn in the hope that Clarke can treat Anya’s injured Second Triss, and as an extra motivation beyond medical ethics, if Triss dies, so does Finn. This offers us another window into the harshness of Grounder culture, but it’s a harshness we’re meant to understand, not judge. Triss, see, is a proper kid, probably (and pointedly) around the same age as Charlotte, who was hurt while leading the charge across the bridge that was blown up, so Clarke does judge a bit, asking how they could possibly allow a child to lead a battle. For her part, Anya looks at Clarke like she’s an idiot while explaining that’s how Triss was learning how to lead (while also pointing out it was the 100’s bomb that hurt Triss, so the moral high ground isn’t exactly firm). It’s a nice reminder that the idea of “adolescence” (because despite Clarke’s words, Triss is not a “child”) is one supported by societies of relative luxury and privilege, both things Grounder culture appears to lack. What Clarke (and, let’s be honest, we) sees as cruelty is, well, it is rather cruel, in an ideal world Triss would have also been able to go to a dance like Octavia, and it would have been one that didn’t lead to anyone’s mother being executed, but alas, the characters live in this one, where necessity rules, and the really cruel thing would have been to not teach Triss about battle until she needed it.
Clarke ends the episode with her own lesson in necessity, when to escape captivity, she kills one of Anya’s men. Limited time and options forced her hand—Finn was being marched off for execution and the assault on the 100 is soon to commence—but that doesn’t change the fact that the guy she kills was actually pretty sympathetic and helpful, actually even assuring her she’ll have a place with the Grounders (which rather serves to highlight that this violence was far from inevitable). She’s clearly a bit perturbed by this, but that’s a sentiment she only allows herself in the actual moment. Before, she’s smart and ruthless (dig how she doesn’t even hesitate after the poor guy reveals he has a bum knee to exploit that), and after, she’s swift and determined. Another necessity.
Except she runs right into a cliffhanger. Hey guys, remember three-parters? Those were great, and we’re in one now!
Posted by Kel V Morris at 6:54 PM