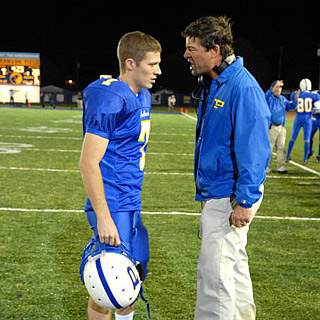 No one recommended Friday Night Lights to me. And I don’t see why they would. I have little love for football, and none for the state of Texas—well, except for Six Flags. Every time a Super Bowl rolls around, I’m clueless who’s in it until the last possible second. My tastes fall in line with the more dynamic soccer. The joy of football has remained a mystery, and it’s certainly not a culture I needed to engage in. My state has no pro team, and my time at my alma mater was an era of basketball acclaim.
I’ve spent time in the periphery, and not just watching on TV or the like. I’ve been to Tuscaloosa, Alabama, home of the Crimson Tide, I stood in the shadow of the Bryant-Denny Stadium, walked its Gallery of Heroes, and dined and drank under the ever-watchful glower of Paul the Bear. It was a fascinating sojourn. A few years back, I relished my school beating the Tide in a bowl game (which I did not watch), because, hell Pride does go before the Fall, right? At the same time, I couldn’t help but feel a little bad. For many, football is big because it’s the only thing they have.
I approached critical darling Friday Night Lights as an anthropological study (and so I could eventually find out where Wallace at), and I came out stunned by how much I adored it. Friday Night Lights is the purest proof of the power of artistry. Much like my precious The Wire, FNL deals with people who have lashed themselves to an institution that is coldly indifferent to their hopes and dreams. And like my precious Deadwood, it deals in how a community is forged. Over its five seasons, with a few missteps, it deals with both with a grace and delicacy few shows aspire to reach.
I’m sure fellow FNL watchers wouldn’t consider this a huge surprise. Oh, wow, Kelly likes the meditative social drama shot in a cinema verite style with the diffuse plotlines spread across dozens of characters, one of whom is a smart-mouthed leggy blonde Amazon, huh? He liked the portrait of a town in decline and felt for the teens desperate to escape, you say? Perhaps he also noted and delighted in the many details in the setting, huh? Did he appreciate the extended silences, the reluctance to over-exposit, and the many studies of dreams lost, deferred, altered, thrown away unwanted, and perhaps even realized? Shocker! However, my adoration does touch deeper veins.
While High School football is central to the show, it is not High School football as I experienced it, an affluent suburb program, loaded with white kids who will play for a few years before moving on to investment banking and various other tool careers. For the players of Dillon, Texas, the game is their way out, or their chance at personal glory, no matter how fleeting it may be. It’s a way out to some of the women, too, assuming they’re willing to cast their lot with a star player, and for those unwilling to do that, it’s an unspoken symbol of the town’s injustice, and their lack of agency—the boys can aspire to be Panthers, while the girls have only the strip club. And for the community at large, a town of absentee fathers, a crumbling oil industry, and an Applebees, football is the one thing that can make them proud. Silly as they seem to outsiders, the stakes are both real and high.
Football, however, is really a secondary theme, because FNL is ultimately about teaching. As important as the struggles of teenagers Street, Saracen, Riggins, Vince, Tyra, Julie, and Smash may be, the central figures are Coach Eric and Tami Taylor, TV’s most credible couple, perfectly played by Kyle Chandler and Connie Britton. Coach is a taciturn man with boldness and pragmatism of real old-school masculinity—exuding the honor, character, and restraint that should mean instead of the cartoonish insensitive thuggery glorified these days. His inspirational speeches and statements and gestures are simple, but delivered with such gravitas and authority how could they not be true? Tami is no less formidable, though she’s less intimidating, a blend of Southern charm and unyielding tenacity, providing an aspirational female counterpart to Eric’s inspirational male—proof to Dillon’s girls that they don’t need to be strippers tied down to a succession of alcoholic dirtballs, but can be powerful in their own right. While we may check in with the students, even after they’ve left the High School stage, the Taylors and their struggles balancing political pressures with the revolving student needs is always at the center.
But most impressive was how the show made me a believer in the game. I’m still not a fan in the real world, but as a sport of cinema, football is first rate, the perfect vehicle to play out the characters struggles, failures, and victories. Coach gives the order, QB1 calls the play, the team sees it through, and armed with understanding of the characters and what they’ve been through, what the stakes are beyond a W, it pulled me in like few things have. It’s still a mystery to me how football came to be popular before someone could make a film out of it. But in my apartment on a Wednesday afternoon, I still found myself leaping to my feet, fists pumping the air, shouting “Yes!” at each long-bomb pass, each desperate rush, each strained reach across the goal line. One thing I do understand is a good story.