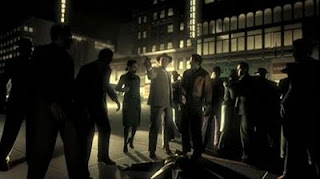 The latest book club reading was Cormac McCarthy’s The Road—a challenging and unconventional novel to say the least. It had no chapters, little punctuation, and much of the backstory left to intimation and impression, it’s stylistically daring, and fertile for discussion. How does it factor into the survivalist post-apocalypse genre? What is the effect of the spare punctuation? What happened to put the world in its state (for the record, we had three options: nuclear bomb, meteor, and sudden, violent climate change)? It was a robust and lively chat.
It occurred to me that anyone presuming to write a serious critical essay detailing how The Road didn’t work because it wasn’t punctuated properly and wasn’t divided into chapters would be roundly laughed off any legit publication. And rightly so—high level criticism isn’t about finding fault, and everyone knows it. Things are different for game people, though. Obviously, most could care less to see any sort of in depth analysis of a game, but there are some who yearn for “serious writing” about games, and I’m one of them. I worry, though, because while these peers demand serious criticism, they don’t seem to know what that actually is.


Here’s how I’ve seen it go down. A game is released, and press and players alike adore it. Players are enthusiastic, and review scores are through the roof. “Universal Acclaim” says Metacritic. But it isn’t universal, for somewhere there is a malcontent, and where everyone sees genius, they see error. “It’s simply not as good as everyone says,” they insist, but who is reflecting that view, when the game rests comfortably with a score of 96 averaged from 105 reviews, and the lowest is an 80? Sometimes, this prompts them to ask “Where is the serious writing about games?” You know, the kind that’s willing to dig deep and tell it like it is! The kind that doesn’t buy into the hype, the kind that’s objective and not biased, the kind that will perceive, as I have, that this thing everyone loves is overrated! The kind that will tell The Truth!
It’s along these exaggerated (some only slightly) thoughts that the demand for serious game criticism turns. There are two types of writing, so the demand seems to say—reviews, and then later reviews with bigger words that tell you why this game you thought was so great is actually shitty. Increasingly, I think these people are getting what they’ve been asking for—with Dragon Age II having slipped from the primo mindshare, it’s LA Noire’s turn to get lengthy blog posts taking it to task for its blemishes. Finally, serious criticism!
But I don’t see it. I don’t see how interesting discussion and forward momentum can come from thus “Nuh-uh! Is not!” style. It seems predicated on this idea that there is a Platonic Ideal, one perfect game against which all others are deemed lacking. And for sure, they are lacking. Perfection is impossible, we all know that. So how interesting is it to point that out? For me, it’s not. It feels like hammering on a game for not conforming to the author’s expectations. It’s boring to read.
So here is my resolution. For each game I play to completion for the rest of the year, no matter how stupid or dire or broken, I’m going to find something worthwhile to observe about it, and expound on that as best I can. More and more, people seem to be realizing that serious criticism does not equate flogging at flaws, and I’d rather be part of that movement in my own small way. Let’s see how it goes.
Posted by Kel V Morris at 11:47 AM