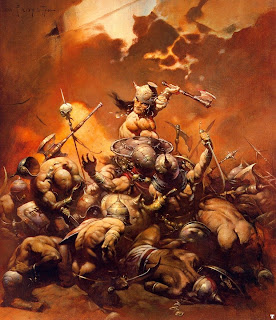 Though the pushback is fierce every time you say so, misogyny in one form or another is deeply ingrained in the culture of nerds, and has been for a long, long time, particularly when it comes to fantasy. This is, of course, rooted deeply in the genre’s origins—not so much the seminal theme-establishing works of Wells, or the refining intricate world-building of Tolkien and Azimov (though certainly you can see forms of misogyny there to). No, I’m talking about the very obvious shapes that came more from the proto-genre’s dark, adolescent id—pulp magazine stories, the best of which survives in the stories of Robert E. Howard, and the art which his creation, Conan the Barbarian, inspired, particularly the dynamic and lurid work of Frank Frazetta. Frazetta’s work is as undeniably great and influential as it is problematic, and as nerds become bigger tent, there’s more and more of a push to get past his diaphanous slave rags and chainmail bikinis, and into things a woman on a battlefield is more likely to wear, found ‘round the internets in places like the Flickr, “Women in Reasonable Armor”. It’s also an undeniably good push, but I wish it felt, to me, an untarnished one, instead of one tinged with different misogynistic undercurrents.

Let’s, for a moment, consider the work of Mr. Frazetta, whose paperback cover illustrations set not only the image and aesthetics of Conan, Tarzan, and John Carter, but the image and aesthetics of fantasy art. His work was perfectly suited to the pulp stories he was selling—wild, unrestrained, over the top, imaginative, dynamic, alien, and loaded with claws, fangs, steel, muscles and flesh, like Mako they tell of the days of high adventure. As a result, Frazetta has loomed over every D&D game played since the 70s, more so than even Tolkien, for with those dice in hand, what is best in life isn’t an intricate exploration of language and myth, but to crush your enemies, see them driven before you, and hear the lamentations of their women. 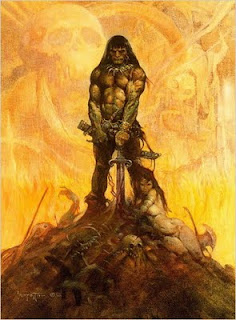 Whether in repose at Conan’s feet, being shielded from a slavering beast, or stabbing the beast themselves, this is pretty standard attire for women in Frazetta’s work, and as forceful and magnetic as that work is, it had an influence on the way women in fantasy art were portrayed in general—scantily clad, an aesthetic best exemplified by Red Sonja, originally a side character in Conan comics, and her infamous scale bikini.
As an aside, I bet someone thinks here is when I play what, for many, is the trump card in this sort of study: “Conan, in the work above, wears as little as the girl.” I won’t, though. It’s the most obvious counter to criticisms levied against portrayals of women, so it comes up often. But it’s (how ironic) a very superficial counter—one that bleaches away context, intent, subtext, and audience. Conan, ripped and chiseled, evokes the Charles Atlas ads that no doubt accompanied many of his stories back in the day. He’s a figure of aspiration and escape—he is, to the awkward, skinny adolescent boys picking up that copy of Weird Tales, an idealized proxy. None dare wedgie Conan the Destroyer! The girl (for, indeed, that is her identity here), however, is clearly an object in two senses, there for those same boys to lust after, but also there as a component of Conan’s identity—Conan, invincible slayer of foes, and possessor of women.
Back to the chain bikinis. Though still very male-dominated, nerd culture’s tent has grown since the 70’s heyday of Frazetta. Increasingly, both genders want to crush their enemies, see them driven before them, and hear the lamentations of their life-partners. Women want their proxy representations to be tasteful, men bristle at the arrested development image of the culture, and both delight in the most sacrosanct of nerd traditions—being an expert on things we have no expertise in. Here, we’re experts in the combat of ancient days, for which we’d all agree Red Sonja’s attire is ill-suited, defensively. Thus, we have great repositories like “Women Fighters in Reasonable Armor”: 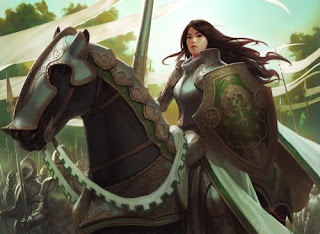 This particular Tumblr got linked out into the morass of the internet at large recently. And it was in the ensuing comment sections and reaction posts that my ambivalence started. Everyone was positive. Everyone understood the need for such a Tumblr. But for my tastes, far too many reactions boiled down to this cartoon (found on the Tumblr, and drawn by a woman, but frequently reposted to much acclaim): 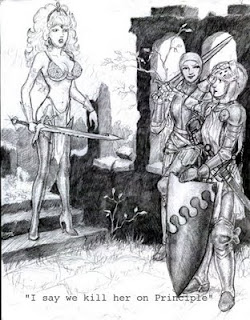 Now, for all the talk about the expanding demographics of nerd culture, as I said, it remains very male-dominated, particularly following on the internet. And I’m not particularly comfortable with a bunch of dudes cheering the notion of punishing a woman for dressing inappropriately—at best, it’s awkward, worst is speaks to a harsh Puritanical streak. How Puritanical? A few proclaimed something like this is ridiculous: 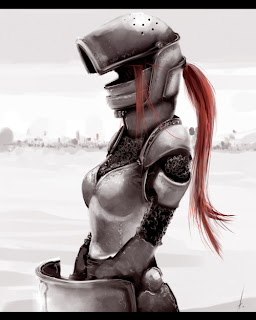 Why? Boobs. The breastplate is weak, having two booby pockets rather than a single boob pouch, and is therefore unrealistic (we can leave aside the irony of demanding realism in our portraits of elf women butchering goblins, because that’s a different can of worms). While the text of the comment says “To be realistic, the breastplate should be one solid flat piece, for structural soundness” the subtext seems to be saying “To be realistic, no female traits should be apparent.” Women, the subtext says, are weak, and to be taken seriously should hide their gender as much as they can. This is, luckily, is not the attitude of Women Fighters in Reasonable Armor (which does have many works of women in “realistic breastplates”), but it does seem to be the attitude of an alarming number of guys out there who think themselves progressive. Women characters who don't appear to be women rather defeats the purpose, doesn't it?
I could be totally off there, but I’m not off with this: The similar brouhaha over Commander Shepard’s hair was stupid. 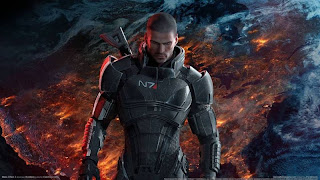 Commander Shepard, seen above in dude form, if you aren’t aware, is the customizable protagonist of Bioware’s Mass Effect series. In a few months, Shepard will be seen in Mass Effect 3, defending the entire galaxy against utter destruction, heralded by an invading horde of relentless, ageless, super-intelligent sentient ships, who emerge from the dead space beyond the Milky Way to enact their genocidal prerogative every few million years. Yes, Shepard is a bad-ass supreme. Players, in taking control of this titan, can set Shepard’s appearance, including gender. Either way, the result is the same—Shepard, a gun-toting force as unrelenting as gravity, intent on saving our asses whether we want it or not.
Players love Shepard, and the character’s mutability plays a key role in that love—often, players refer to “my Shepard”. In the game’s marketing, however, the default dude Shepard (based on a Dutch model, apparently) has been dominant, but, again, with Mass Effect 3 on the horizon, the marketeers elected to use lady Shepard more. Lady Shepard had no model to be based upon—her red-haired default was made with the game’s character creator—so no doubt just to market more, an election of Facebook determined what form lady Shep would take in that marketing: 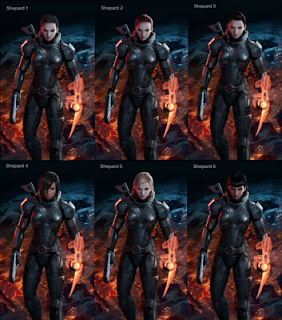 Shepard 5 won. Cue outrage.
I understand parts of the outrage. Like I said, many speak of Shepard as “theirs”, and for many, none of the options were theirs (they were apparently all based on designs from ME’s sizable mod community). “The masses,” it was said “made the superficial choice their reptile brains compelled them to make, and they chose the sorority girl, the Barbie, the vacuous bimbo.”
I don’t think I need to point out the irony here, but I will all the same. All of these Shepards, and many, many more, will be saving the same galaxy, shouting the same orders, leading the same charges, and kicking the same mercenary sleaze balls out of the same windows. Shepard 5 is a Barbie, a sorority girl, a vacuous bimbo by simple virtue of her blonde hair. They’re all action-heroine pretty. They all have the same taut and athletic body-type. They all have count them one, two, three weapons. They all are encased in armor forged of future-alloys and raw death. They all bear the same grimly resolved countenance, unfazed by the burning continent in the background. In some eyes, Shepard 5 loses credibility depending on her hair color.
The cruelest irony is that the attitude seems rooted in outmoded assumptions about modern culture’s standard of beauty, and clichés that nerd culture has played no small part in subverting. Maybe it’s just my perception of things, but we still have our unreasonable beauty ideals, and hair color hardly seems on the chart anymore. Simultaneously, it disregards figures that have played no small part in shaping modern nerd culture, and thus played no small part in making it more inclusive. What do Buffy, Veronica Mars, Sarah Walker, and (less so for me, but for plenty) Starbuck have in common? I wouldn’t dare call any of them vacuous.

Well, the advertising version of Lady Shepard doesn’t have to worry about being counted among that number. Bioware had another vote, this time to determine hair color, and red won. Bullet, dodged. No longer vacuousness, the message is clear: “I just finished shooting my way through Hell, gutting you will not be a big deal.” 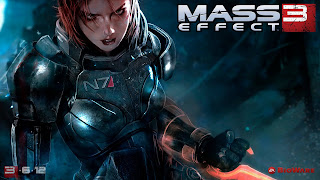 Hey, wait a second. Are there two breasts in that armor?
Posted by Kel V Morris at 3:38 AM