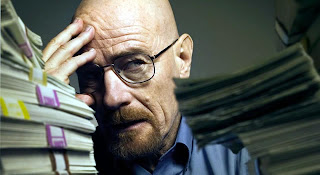 Some months back, right as I was finishing up Weeds, another tale of middle-class sensibilities colliding with the drug world came across my path: Breaking Bad, which I found so superior to Weeds, I instantly made it the counter-case with only a little more than a season under my belt. Now, with season 4 coming to a head, and a key role Breaking Bad will play in another piece I am preparing, it seemed right to revisit the nausea of Walter White, and give it the full treatment.

Breaking Bad gets called a Drama—and for sure, it looks like one most of the time—but its true core is black comedy. The blackest, in fact, in the tradition of those great comic minds Nietzsche, Heidegger, and Sartre, and the source of its comedy is the most primal human experience: the fact that we are going to die. Walter White, brilliant chemist, high school teacher, and late-middle-aged sad sack, learns that he has lung cancer, a death sentence that shocks him out of the stupor of his existence and prompts him to take bold action to cope with this realization. But as Sartre warned, he takes action too recklessly, too extreme, and the whole time, the joke is on Walter. His death sentence was being born.
Desperate to provide for his family before he dies, Walter turns his genius towards cooking the greatest meth the world has ever seen, a course that, in true existentialist fashion, pushes him to the extremes of morality and action, putting him in perpetual danger (but then, when aren’t we in danger?), bringing former-student and innocuous scumbag Jesse Pinkman in tow. At the same time, it emboldens Walt, gives him a sense of power, and animates him with the will and courage to survive. He could pull away, but doesn’t, and unlike many of his TV criminal peers, he isn’t drawn back by peer pressure, inability to cope with the straight life, or even truly greed. Cooking meth gives Walt satisfaction his deadening career and wheel-spinning home maintenance don’t. It’s just too bad that it took cancer to get him to find it in such a repugnant avenue.


That may not sound very comic, but the jokes, as I said, black jokes at the expense of the absurdity of existence, particularly the one Walt and Jesse have built for themselves, tinged with darkness and desperation. The show laughs, rather than crying—and, of course, sometimes, crying is the only choice.
Much of this sense of humor gets carried on the back of the shows sense of playfulness. Breaking Bad is, perhaps, the most stylistically interesting show still around—whether it’s having bleak fun with a well composed montage set to an inappropriate tune, investing a minute into watching the methodical crafting of the saddest PB&J ever, creating an inexplicable and alien sense of dread with an eerie cold open, lashing the camera to a shovel, or making an authentic looking narcocorrido video to signal the cartels’ growing awareness of Walt.
The show is equally adept at exploiting its Albuquerque setting in ways that feel authentic—meth is a big problem out here in the West, after all. With high-desert vistas, a Wild West heritage, border concerns, and suburban strip mall housing boom inauthenticity (how ironic), the city lets the show create a universe where a drug kingpin owns a string of fast food chicken joints, but the best deals are done outside The Gap.
All of which I say to bring the artfulness of Breaking Bad into focus. It’s not simply well-shot, well-acted, and thematically rich, but well-written in a very classical sense, and in a way shows rarely are, giving objects, images, characters, and moments the weight of symbol and metaphor. Early, Jesse is beaten to near death with a bag of money—the American experience rendered so simply, it’s stunning it took someone this long to use it. And where other shows might inflict a physical punishment on a protagonist for their hubris, the cosmos sends a fiery cataclysmic indictment that the entire city can see, but only Walt can recognize, and it’s a punishment far more terrible than the foreshadowing leads you to expect.
Or consider the motif of shorn heads. Late in the first season, ravaged by chemo, Walt shaves his head, an act that seems united to his grappling with death and moral ambiguity. Slowly but surely, a succession of bald (or close cropped) characters appear in Walt’s world, until he seems surrounded by shadow forms. Self-annihilation, macho bluster, gruesome nihilism, impotent rage, implacable drive to destruction, ice-cold mastery, each of these baldies reflect and comment on Walt’s own confrontation with mortality—but can he take the right insights from them? Certainly, he could stand to listen more closely to the example imparted by Mike: clarity of action.

Willy-nilly murder? Well, that’s not the best advice, but Mike is right. Life is too short to half-ass—it has to be grabbed, but grabbed wisely. You’re not in danger when you are in a shoot out, or at the mercy of a lethal drug lord, or even when you’re diagnosed with cancer, you’re in danger the moment you’re born. That’s what’s so funny! Get it?
Posted by Kel V Morris at 7:49 PM