The Mountains of Madness Peak in Ourselves 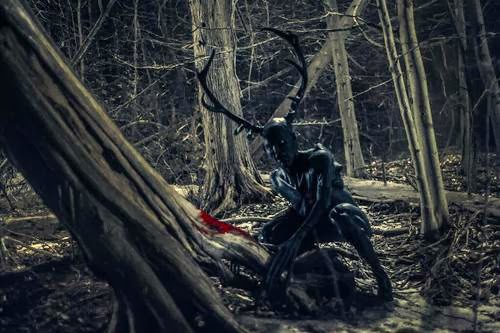 Serial killer shows are, by my reckoning, the stupidest goddamn things. While I believe their nadir was last year’s The Following, my favorite example of their stupidity was sometime earlier, in some show called “Chase” or “The Chase” or “Chaser” or something, about a marshal doubtless named Chase. Anyway. I watched it because it featured The Wire’s own Mr. Prezbo for an episode as some manner of badass criminal, a sight too hilarious to pass up. He was, of course, a serial killer, which according to the modern paradigm means he is the very pinnacle of danger, physically and mentally unstoppable. Despite being a former English teacher who attacked 16 year old girls, his compulsion for murder gave him the fighting prowess of the Predator and the calculating brilliance of Lex Luthor. In the opening moments, he beat two armed marshals to submission while shackled and escaped. Later, he breaks into an empty home. “He has a knife now,” one of the desperate marshals on the hunt intones. By the next scene, the pursuing marshals are armed for Ragnarok. Kevlar. Bandoleers of flash bang grenades. Assault rifles with nightvision scopes, forward grips, and double magazines for fast reloading. Such were the tools needed to take down this elemental force of murder now that he had a kitchen knife. Moronic.
But that’s the power our cop dramas usually attribute to serial killers. They’re the boogey men. We don’t believe in goblins, witches, and ogres anymore, so we have serial killers. And that’s just one stupid patch in the deep, stupid quilt of stupidity that goes into the serial killer show. That matter of taste should be kept in mind when I say Hannibal is one of the best shows on right now. It goes to show that a little artfulness goes a long way.


My main issue with such shows is that they are cheap, and in being so, they cheapen their subject matter. They toss around rape and the threat of rape as trivial drama-heighteners, feature simplistic, reductive pop-psychology backstories to provide superficial explanations for their absurd, convoluted MOs, trivialize the effect such investigations can have on the investigator by having their heroic cops occasionally look stone-faced in a montage and calling that token gesture good enough, and they love violence against women, the blonder and thinner and whiter the better. They’re superficial, and they only manage to disturb in that it’s disturbing how superficial they are about brutalization, sexual violence, and law enforcement. Slasher exploitation in their main speed. You might have expected, as I did, that a show that might be considered a reboot Thomas Harris’ novels would fall even more easily into those traps, especially since the character Hannibal Lecter could be considered to have started the whole pop serial killer craze.
But rather than joining the slasher ranks, Hannibal aspires to genuine horror, which it frequently achieves. It doesn’t just prod at us with the threat of a violent death at the hands of a bad man. Instead, it draws on far more intimate, fundamental, and primal fears, with great atmosphere, cinematic flair, and a sustained sense of dread and paranoia.
Lots of shows bandy in images of corpses, but Hannibal has thematic concerns in its uniquely Baroque compositions. In particular, it plays on the transience of the flesh. How easy our bodies can be reshaped into something else, whether that something else is a bloody angel, a totem pole, a cello, or a tartare. Each haunting tableau plays on our fear and mistrust of our unreliable, capricious bodies and their continual transformation, through age, injury, and finally decay.
While many characters take in these surreal image of dark beauty, the one we focus on is protagonist Will Graham. Will seems like a great many modern TV hero detectives, with a mental gimmick/illness that makes him a great catcher of bad guys (though, as he is the main character of the first Lecter novel, Red Dragon, from 1981, he is significantly older). The gimmick, however, is he’s hyper-sympathetic and imaginative, which is not exactly the highest of high concepts (I don’t see CBS’s “The Sympathizer” getting very far). He sees and understands the compulsions driving the murders he investigates, recreating the scene by inserting himself into their place. Doing so leaves marks on Will’s psyche. While we’re used to our cops on the edge to have their inner turmoil expressed through alcoholism that somehow never impairs them and nebulous problems with some thinly sketched characters constituting a family, the effects on Will are stark, vivid, legitimate psychological damage. Insomnia, night terrors, an irritable affect, extreme isolation, vivid hallucinations, lost time, there is little that’s rote or token about Will’s horrific descent, which gets sped along by a case of encephalitis. He separates himself from everyone (even the lovely Dr. Bloom), sequestered away in a lonely rural home filled with stray dogs he adopts. Hannibal, serving as his therapist, asks Will to draw a clock face, which we watch him do. And it’s a perfectly fine clock face, two hands, 12 back to 12, the works. When Will hands it over, however, we see what he actually drew (Hannibal shows it to a few other characters, so we can accept it as reality), a sloppy, illegible scrawl with all the numbers clumped down in the corner. Horrible as the unreliability of the flesh might be, it can’t hold a candle to the horror creeping from the unreliability of the mind.
Insanity is, obviously, a trope of serial killer stories, but the fear they stoke isn’t of Insanity, but fear of the Other (these Others just happen to be insane). Hannibal, however, pulls fear from insanity itself, as we watch Will descend uncontrollably very near to madness, and see what Hannibal is able to do because of his untrustworthy mind. Rather than fearing what someone else’s insanity might do it us, we’re invited to fear the potential we might be unable to stop our own fall into madness because we don’t even realize it’s happening.
While our bodies and our minds frighten us with their unreliability, there is something that frightens us because it might be true—we are alone. No one can understand us, and if that’s so, how can we connect with anyone? Hannibal himself fears this, even if he doesn’t understand it as fear. In Will, who can understand anyone, no matter how vile, he sees someone who can finally understand him in a way even his fellow killers never can. But as much as he might want to be understood, what he does to Will by the end of the first season goes a long way toward illustrating why he isn’t exactly worthy of such understanding.
Throughout the series, Will has been haunted by a specter of death, taking the strange form of a great black elk covered in feathers that moves without sound. It’s connected to the first case he works, the “Minnesota Shrike,” who leaves bodies impaled on antlers, and also connected to Hannibal, who keeps an elk sculpture in his office. But mostly, it represents the bits of each crime that Will cannot shake. Those other shows, the knife-across-the-cheek shows misunderstand, there is no horror left for the victims. To go on living and know and understand what we can do to each other is the real horror. No hero cop team can bust down the door and save us from that.

An Addendum: Hannibal's motivations and drives remain appropriately cloudy and unknowable, however his MO, we see, is that he targets people who offend his sense of propriety. Seems fitting for a modern age where people are being shot and killed because their music is too loud or they're texting in a movie theater. Of course, in the world of the show, we know Hannibal is eventually imprisoned--the same can't be said for the murderers in our world.