How Can You Hate Little Birds? 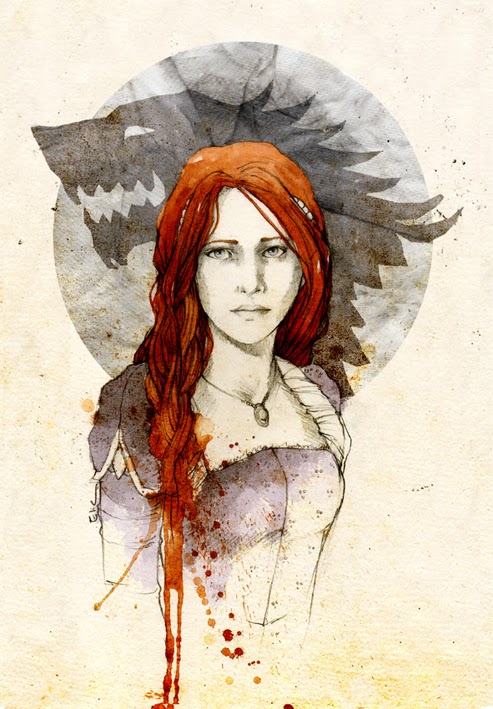 Far back in the mists of time, in the days when season 2 of Game of Thrones was drawing to a close, I was conflicted. I wanted child-murderer, rape-enthusiast, and all-around chickenshit Theon Greyjoy to meet a horrible, stabby death at the hands of the forces gathering around him. At the same time, if Theon does get gutted, who would I hope gets slapped in every scene in which they appear? Conundrum. Joffrey was still around, though, I observed, but an onlooker offered an alternative—“There’s always Sansa.”
I was actually taken aback. Really, I was stunned. “Why the fuck would I want to see Sansa get slapped?” I asked, even though I knew any answer I got would be dumb. Because, really, there’s only one reason to hate Sansa that much.


Invective directed at Sansa highlights, to my mind, the ultimate absurdity of the current period of fan misogyny, the seemingly unavoidable fashion among some to contort, torment, and strain the narrative they’re watching until the poor choices, woe, and morally questionable actions of a male character is actually the fault of this chick the whole time. And that’s exactly what I was told when I asked: in defiance of the complicated plots and machinations that we all saw lead up to the event, it was actually Sansa who was responsible for honorable patriarch Ned’s death (specifically, that her loose lips blew Ned’s plan, which I say is a gross overestimation of how airtight Ned’s plan was). Somehow, it’s always the women characters who get this psychotic response. And truly, psychotic is the best word—not in the American Psychological Association approved usage, but a more old fashioned, poetical usage, reflecting a break from reality (even though we’re talking fictional characters here). I don’t think there’s much else to call a process of thought that makes Skylar White, Carmella Soprano, and Betty Draper the true villains.
What differentiates Sansa from these other ladies, is they have elements of ambivalence and ambiguity. Skylar becomes complicit in Walt’s endeavors. Carmella knows full well she is a mob wife. Betty has her own litany of issues that cause fissures in her marriage. None of them are really innocent—they just aren’t as bad as the nutbars insist. But Sansa is an innocent in an awful circumstance. You’d think that might net her at least some sympathy.
It’s not as though there’s no reason to dislike Sansa. Indeed, she can be hard to like, especially compared to some of the show’s other women. She’s not a pinnacle-tier beater of ass like Brienne, not a sexually liberated survivalist like Ygritte, not an imperious commander like Dany, doesn’t do crazy sultry magic like Melisandre, and she’s really too young to wear boob dresses like Margery. Even, or especially compared to her sister Arya she doesn’t fare very well. But then, Arya seems designed to be liked by a modern audience—she’s a norm-defying tomboy who wanted to do archery and sword fighting, now forced on a dangerous adventure across the countryside, intoning the names of those she intends to make face her justice each night on her way to becoming a rogue assassin under the guidance of a succession of increasing bad asses. Meanwhile, Sansa was introduced as a girly girl who quickly takes to high fashion and dreams of meeting her fairy tale prince, and has remained trapped and terrified as a hostage at the mercy of a childish sadist king and surrounded by enemies, some perceived, but the overwhelming majority actual. Arya’s story allows her to be proactive, Sansa’s doesn’t. That’s not a weakness in the series, it’s the point—her story is about how she can’t be proactive, because she’s in a place where she has to endure and survive. There are a lot of reasons to not like Sansa very much (though I like her a lot), but to not pity her really concerns me. And to wish further violence upon her is moronic, posturing bullshit.
Of course, she’d already been smacked several times on the show, on the orders of fan-favorite Joffrey, which should tell you something.
Another of my ancient statements regarded the ethos of Jaime Lannister, and how his skepticism toward oaths made him perhaps the most like we modern people (his propensity for twin fucking, less so). But I’ve changed my mind. As I mentioned, Sansa was first established as a girl who so loves silly fantasies of noble knights and princes sweeping their fair maidens away to happily ever after she thinks the world works that way, and she is quickly disabused of these silly notions by the real world. Consider, though, that many viewers respond to criticisms against a narrative’s physical violence, gore, nakedness, moral ugliness, and whatnot by saying it’s “realistic.” Hmm. Fantasies that are real, huh? Maybe Sansa is closer to us than we’d like. Maybe that’s why she gets so much hate.

*The image up top is by the artist Elia Fernandez, and I hope she doesn't mind my putting it here, because I like it a lot.
Posted by Kel V Morris at 11:32 PM