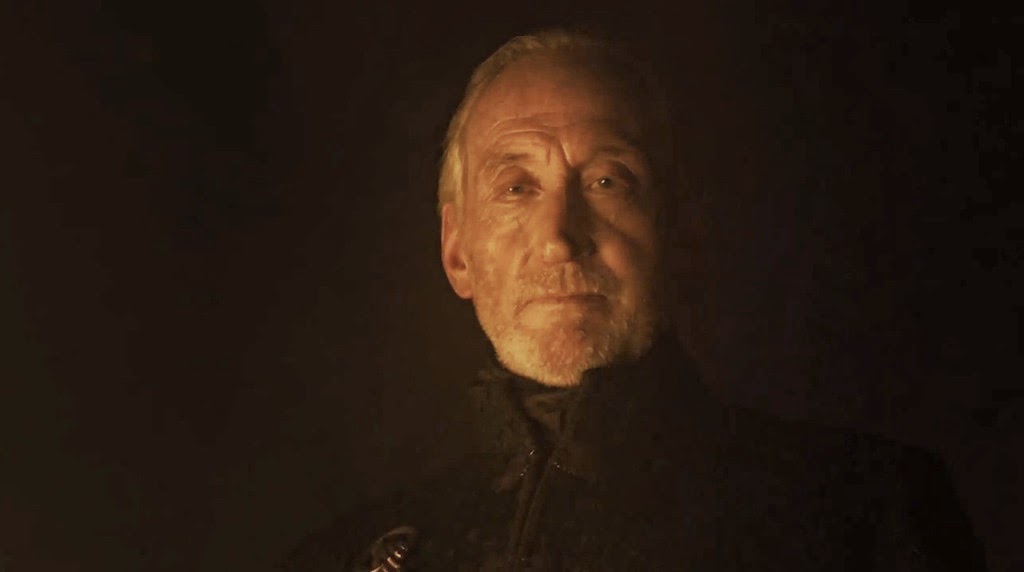 While obviously the cast of character in Game of Thrones can’t be handily divided between Good and Evil, it is still a moral series, with a clear sense of and ideas about what is right and what is wrong. It may have its fair share of amoral characters, but the show is not amoral itself. Each character in the complicated ethical landscape of the series has something to say. But my favorite statement has always come from Tywin Lannister.


Saying that might concern you. Sure, Tywin may not be as deplorable as Joffrey or Theon, but he isn’t exactly nice either. Perhaps you’re worried I’m about to say something really tedious and juvenile about “doing what’s necessary for survival,” like I’m 14 and Marilyn Manson is the hottest shit ever, and you thought I was better than that. If so, thank you, and don’t worry.
As it has been throughout human history, torture is a popular practice, and even pastime in the world of the series, particularly in…well, actually, in all seasons of the adaptation, but I’m thinking specifically in season 2, when everyone is at war and has an excess of prisoners. In Robb Stark’s camp, Roose Bolton suggests all their prisoners be tortured and killed, and I’m sure if you asked him, he’d argue it was necessary for survival. And, viewed through the cold, brutal eyes of logistics, he does have a point—they have nowhere to house these prisoners, it’s costly to feed them (even costlier to feed them well), and setting them free is likely to just bolster their enemy ranks. But Robb won’t allow that, because it isn’t right. Robb is 100% correct, however just asserting rightness doesn’t exactly sway someone like Roose, who comes from a family so well-known for torture, they made their heraldry a big advertisement for their love of torture.
Meanwhile, when Arya arrives at Harrenhal, we see how things are done in the camp of The Mountain, Tywin’s most fearsome man. There, the soldiers seem intent on rooting out and destroying “the Brotherhood.” Who is this Brotherhood? We don’t know, this is the first time we’ve heard about them, and in that, we are not alone, because the devastated peasants being viciously tortured to death seem to have no idea either. Several dead peasants later, Tywin rides in, and surveys the situation. Now, we’ve seen that Tywin is a lot of things—cold, distant, harsh, calculating, ruthless, war-hardened, scheming, nothing particularly nice. But one thing he is not is patient with lesser minds, a cohort which appears to include every character in the series. His irritated perspective: Why are we wasting all this skilled labor? He even asks Gendry, who’s about to have a very bad day, if he has a trade, to which Gendry answers that he’s a blacksmith. “Blacksmith,” Tywin repeats like he’s illustrating the point to a bunch of dim children…which he more or less is. Tywin isn’t a good man with no stomach for brutality, but he is a pragmatic man with no tolerance for frivolity and waste. Seemingly alone in the series, he’s smart enough to see the nihilistic pointlessness of wanton cruelty. In a culture where we’re often battered with simplistic divides between irrational rightness and rational survival, it’s nice to see a character who’s too smart and pragmatic for shallow pragmatism.
Unfortunately, Tywin doesn’t quite go far enough. He may stop the torture, but he still insists his idiot men find the Brotherhood. He may sneer with contempt when he says he hoped an underling “had talents beyond brutalizing peasants,” but he still let that underling brutalize those peasants. He may derisively tell Arya that she shouldn’t let the Mountain drink lest his work suffer, he’ll still use the Mountain. This, to me, makes Tywin one of the series’ most tragic figures. He has all the genius, and for the sake of empty tradition, he sublimates it to a broken system he recognizes as broken. Tywin is, ultimately, a very sad character, one who had the means to be anything, but let his corrupt society shape him rather than reshaping it into a form more to his liking.
For a case study in what Tywin let himself get shaped into, you need look no further than his children. He burdens them with external expectations, derived from how he needs and expects them to navigate the dysfunctional system of nobility, and they drive themselves nuts out of both fear of him and a desire to please him, until they’re all but destroyed. But, at least in the adaptation, as we see flashes of the moral man he might have been in his contempt for the cruel, we also see flashes of the father he might have been in his interactions with Arya. To be sure, he would not have been a cuddly funtime dad wearing the crazy hat down the log flume, but he shows Arya respect for just being herself, imparts wisdom, and takes what for him has to count as delight in her intelligence rebelliousness, with no expectation. It’s a damn sight more than his fealty to the notions of noble houses and feudal traditions allowed him to give his children.
Because at the end of the day, how smart you are matters much less than what you do with it.