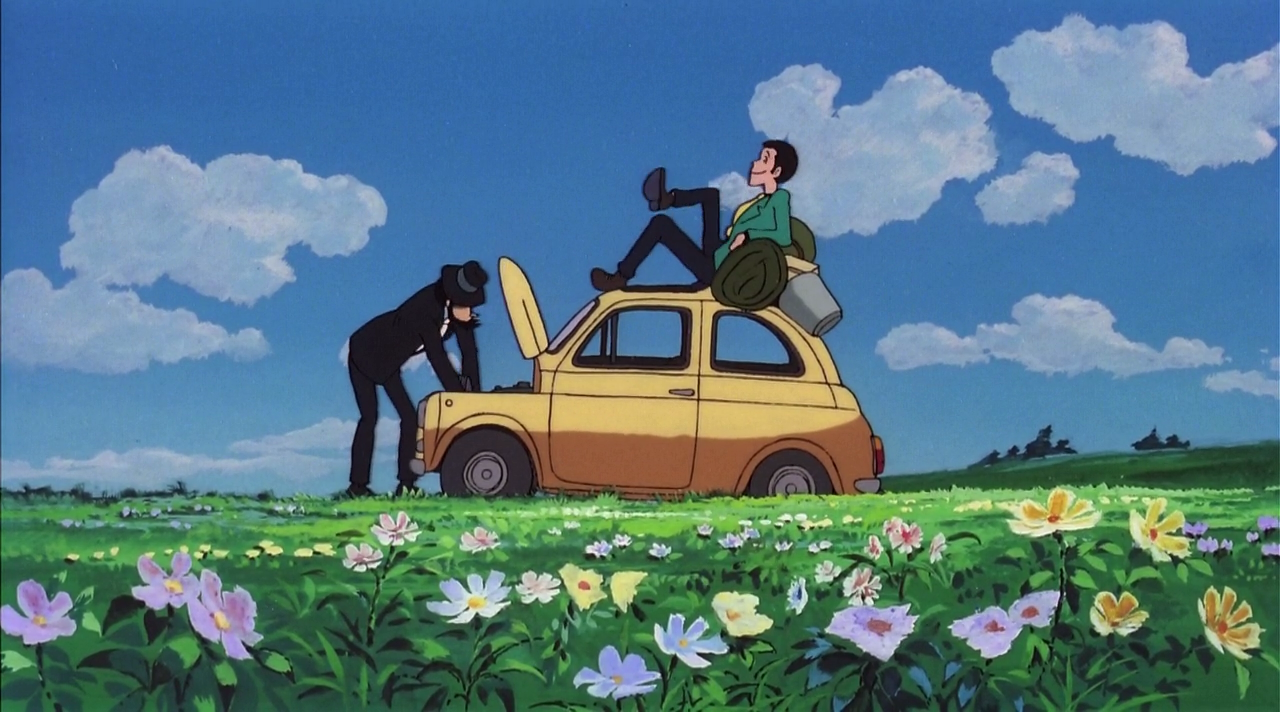 “Reknowned international thief Lupin III comes to the small European duchy of Cagliostro to investigate some excellently-forged money and stumbles across a national conspiracy going back some hundreds of years. Lupin and his friends must rescue the beautiful Clarice from the hands of the evil Count Cagliostro and solve the mystery of a hidden treasure dating back to the 15th century.”


At first glance, Miyazaki’s first film might seem like a bit of an anomaly, some mercenary work on a big franchise. That’s understandable—it was his first film after all. But as franchises go, this one’s a ton of raw fun. First appearing in manga in 1967, Arsène Lupin III is a gentleman thief who gallivants across the globe with his colleagues Jigen and Goemon, and his infatuation/rival Fujiko, whilst pursued by the Javert-esque Inspector Zenigata of Interpol. The perfect recipe for sundry heists, adventures, and capers, but it does not scream out as the sort of work Miyazaki, renowned for his painterly grace, gentle pacifism, and themes of the environment and youth, would undertake. It’s also the only one of his films not released under the auspices of Disney, further creating the sense that it rests outside the canon.
That would be incorrect, however. Miyazaki may never have returned to franchises, or sexy amoral thieves and crooks in exotic locales, but his fingerprints are all over The Castle of Cagliostro. Indeed, some fans were critical of how Lupin’s rough, morally dubious edges are a bit sanded in the film. The Lupin Miyazaki presents emphasizes the “gentleman” half of his archetype, as he sets about freeing a young duchess from an engagement to a much older, very nefarious nobleman with bad intentions. How older generations subjugate and inflict their unwise whims on the young is a concern Miyazaki would return to again.
Also apparent throughout are many of the hallmarks of the man’s animation. While the designs of Lupin and crew were established, all of the figures bear the distinctive Ghibli style, simple and expressive, from the square face of the Count to the young delicateness of Clarisse. The nation of Cagliostro exists in a very fantastical Europe, a little bit Germanic alpine, a little bit Mediterranean, both settings he seems to feel an affinity towards as the landscape is clearly near and dear to his heart. But also throughout, you see a fascination with mechanics, from the love and care granted to the various 60’s Fiats and Mercedeses that appear, to Lupin’s handy grapple winch contraption concealed in his belt buckle, to the climactic Errol Flynnian swordfight in an enormous clock, to, of course, the prominent appearance of an autogiro.
What truly distinguishes The Castle of Cagliostro from Miyazaki’s other works is a distinct lack of worry, sadness, or fear. It’s very uncomplicated, relentlessly barreling forward with its overwhelming sense of fun, with no other thoughts getting in the way. Miyazaki could have continued down that path, and nurtured a reputation as a ruthless deliverer of romps. But, he didn’t.
Posted by Kel V Morris at 10:28 PM

Labels: Miyazaki, The Castle of Cagliostro