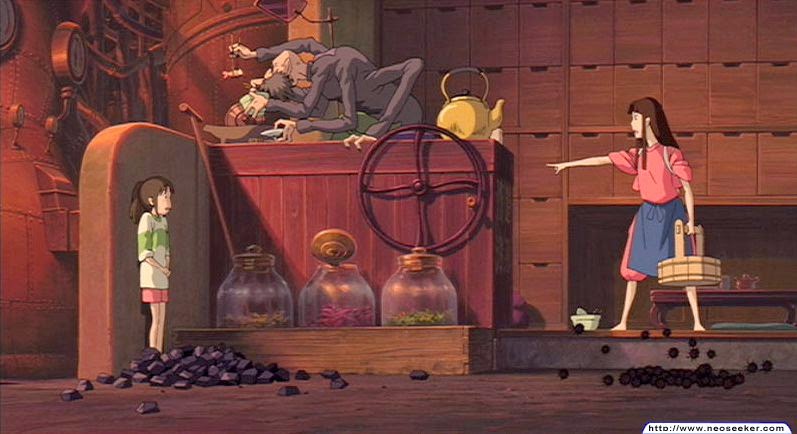 “In the middle of her family's move to the suburbs, a sullen 10-year-old girl wanders into a world ruled by gods, witches, and monsters; where humans are changed into animals; and a bathhouse for these creatures.”


I only understand Japanese culture and history in its broadest strokes, and thus readings of Spirited Away as an allegory for the tensions between traditional and modern Japanese culture and how these tensions were exacerbated by the economic downturn of the late 90’s are beyond my ken. Which is probably why its similarity to a Western fairy tale stands out to me, despite the film featuring Shinto-esque spirits mucking about a bathhouse. And I don’t mean in a monomyth sort of way (the monomyth exists in all cultures, that’s why it’s the monomyth). I mean in the opening minutes, wherein Chihiro’s parents gorge on heaps of unattended food and a suddenly transformed into pigs to be fattened and eaten by a witch, which sounds a lot like what happened to both Odysseus’ men and Hansel and Gretel. And while the name “Yubaba” makes sense in Miyazaki’s native language (translating, I’m told, to roughly “Bathhouse Witch”), he’s a smart and worldly enough man to know how close that name sounds to Baba Yaga.
There’s a far more overtly moral dimension to Spirited Away, which puts it much more in line with Nausicaa and Mononoke than Totoro or Kiki, and is largely from where that Western fairy tale vibe stems. Like a great many Grimm protagonists, Chihiro starts off as something of a brat—whiny, materialistic, and cowardly. A lot of those traits are an understandable expression of her fear of the big move her family is undertaking, and Miyazaki’s intentions are certainly not those of the old Brothers, but it does leave Chihiro standing apart from her peers Kiki and Satsuki.
But the strongest indicator of the moral dimension, and what I feel is Miyazaki’s intentions, is No Face, an unformed mind who internalizes experience, and then reflects those experiences back. In the bathhouse, he experiences materialism and greed, and he responds with a grotesque exaggeration of the same, but with Chihiro, he experiences kindness, which reflects back to her. For Chihiro, he is a reminder that she can overcome her surroundings, but for us, he offers a different lesson—worry over what your society is telling the impressionable.
Posted by Kel V Morris at 1:16 AM