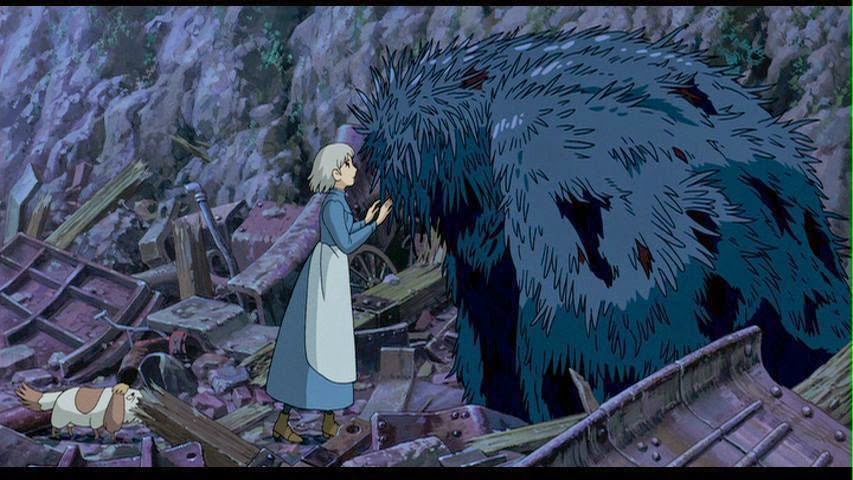 “When an unconfident young woman is cursed with an old body by a spiteful witch, her only chance of breaking the spell lies with a self-indulgent yet insecure young wizard and his companions in his legged, walking home.”


Howl’s Moving Castle is, as expected by now, an incredibly beautiful film—Miyazaki’s name isn’t frequently preceded by “Master Animator” for no reason, after all—but Howl feels like a different kind of beauty, because of how much density is in each frame. The interiors of Howl’s castle, which moves, are packed with so much clutter, they look about ready to explode. They are, in fact, so dense, it can be easy to get lost in them. This seems borne out by many viewers’ sentiments toward the film—you see a lot of variants on the aesthetic pleasures of the visuals (which are, indeed, bountiful), and lots of off-handed mentions of “pet themes,” his antipathy for war in particular. And indeed, thematically Howl isn’t a radical departure, but at the same time,
Howl is about transformation. At first glance, that’s not exactly out of the pet theme house—after all, they’re all over Spirited Away, and Porco’s mysterious transmogrification is central to his film.  But in Howl, transformations, how they happen, how they are reversed, how they are forestalled are central concerns of the film.
Transformations often seem to be manifestations of a character’s internal state, and also a metaphor for the abrupt alterations that must necessarily be made to that internal state by outside circumstance, especially when that outside circumstance is conflict and war. Howl is at will able to reshape himself into a dangerous, however useful beast, but he clearly fears finding himself unable to change back, a state he notes his fellow wizards have placed themselves in. Sophie isn’t quite so lucky—her curse is inflicted on her, and she’s only able to transform back to her youthful self in fleeting moments, and she often isn’t even aware it is happening.
In the end, however, Sophie isn’t able to undo all of her cursed transformation. She does, however, undo most of it. And this is a marked development from Porco—in Howl, while we are shaped, as we must be, by events, we are able to hold onto our selves through them.
Posted by Kel V Morris at 8:44 PM