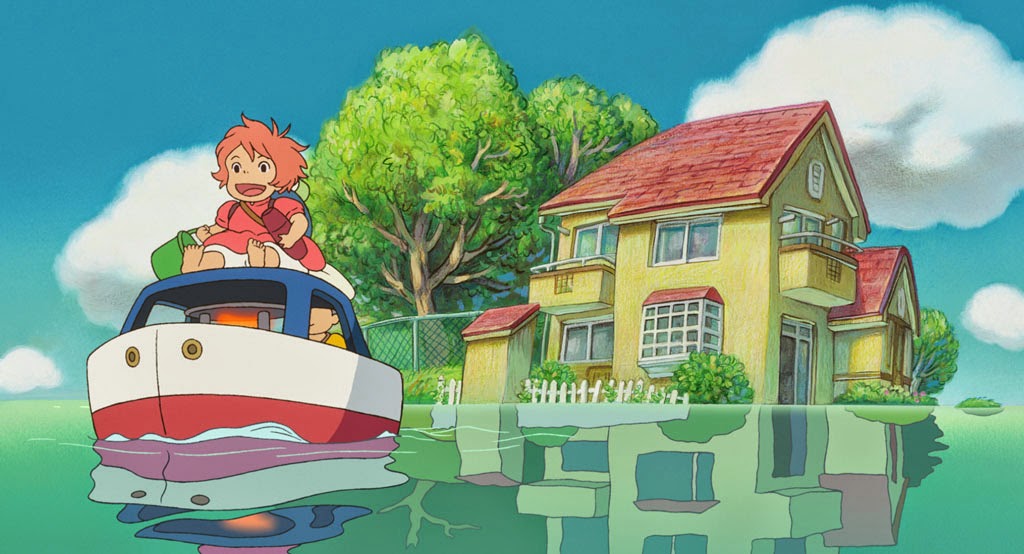 “A young boy named Sosuke rescues a goldfish named Ponyo, and they embark on a fantastic journey of friendship and discovery before Ponyo’s father, a powerful sorcerer, forces her to return to her home in the sea. But Ponyo’s desire to be human upsets the delicate balance of nature and triggers a gigantic storm. Only Ponyo's mother, a beautiful sea goddess, can restore nature s balance and make Ponyo's dreams come true.”

I have to admit, Ponyo is the Miyazaki film I enjoy the least. While it has many virtues and wonders, I feel there’s just too much going on in it to support the sort of meandering aimlessness that makes Totoro so enjoyable. But, I’m committed to saying something, and Ponyo offers an especially pointed reason to discuss a related topic—distribution and localization.
The overwhelming majority of Miyazaki’s films are distributed in the US by Disney—only his first film, Castle of Cagliostro, stands along, being distributed by Manga Entertainment. All of the rest come to us under the aegis of Disney, including Mononoke, which was distributed by the Disney-owned Miramax. This situation is, all things told, probably for the best, especially since we have sort of a portal into an alternate reality in the form of the 1985 version of Nausicaa released in the States under the incredibly creative title “Warriors of the Wind,” which had nearly 30 minutes cut out of it and played down the female lead. Luckily, this reality was averted when, seeing the results, Miyazaki decided to adopt a No Cuts policy. And we should all be grateful for that.
Miyazaki’s films could have easily ended up under the care of any of the anime distributors that cropped up in the 90s and later fell apart, ranging from earnest gaggles of fans to mercenaries hunting the next Pokemon. But Miyazaki’s works are rightly regarded as treasures, so they, to be cruelly frank, deserve better treatment than fun trifles like “El Hazard: The Magnificent World.” Disney brings the Disney money, so every release looks and sounds great, right on down to the scripting, which is largely free from some of the peculiar phrases that tend to plague direct translations. That money means they can command not necessarily better, but certainly flashier voice talent in their dubbing.
Of course, Disney isn’t around to be a costly curator of world cinema—they’re a business, a massive one, and, as they made clear this week when they announced a slate of Marvel movies spanning until the end of the decade, they’re a massive business keenly aware of the power of a brand. So as high quality as the Miyazaki releases are here in good ole Region 1, and as much as Pixar head John Lasseter does appear to be that kindly curator (I suspect much of the Ghibli deal exists to keep the man happy), it’s nigh on impossible to avoid the sense of brand extension. It’s obviously unrealistic and naïve to expect an entity that only sees things as tools and assets not to regard these films as tools and assets, but I do bristle a bit when, in every trailer, I am “invited” by Walt Disney Pictures to watch. But by inviting me to appreciate the works of the master animator, they extend their curator profile, and their brand of quality.
It’s also to be expected that some voice roles be filled with the newest and hottest of Hollywood—there’s a calculation in casting, but there’s the sort of regular calculations that leads to Anna Paquin and Dawson of the Creek, and then there’s a slightly higher level of calculation that leads to both Fannings as the sisters, which is not to say any of these choices are bad.
But then there’s tawdry Calculation you sense when you see Disney bring in its other curations—like, say, the younger siblings of Cyrus and Jonas—and give them lead voice roles, and have them duet on the theme song. Then you start sensing less the mercenary needs of a creative venture, and more the mercenary venture.
Still, the man clearly was fascinated by the Devonian fish.
Posted by Kel V Morris at 9:27 PM