You Can Kiss My Ass, Tomorrowland 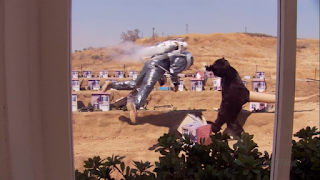 I’m not seeing the movie Tomorrowland any time soon. The seemingly earnest and gentle movie turned me against it pretty early, with a trailer lauding the great minds of science history. Einstein! Edison! Walt…Disney. This is a Disney production of course, and I’ve always found that company’s self-aggrandizing, disingenuous self-mythologizing really irksome. In theory, that would have been the end of things. Disney’s Disney hagiography is nothing new, but I would have rolled my eyes and moved on. After all, Saving Mr. Banks rewrote history so embittered author P.L. Travers achieves emotional catharsis under the beatific watch of wise and kindly Uncle Walt, instead of being someone who was pissed off and didn’t want dancing penguins in the adaptation of her work, and I didn’t rant too much about that. It’s a movie that should have just passed me by, even if I have much more of an affinity for science fiction than I do for mid-century quasi-historical retcons. But then the movie came out, and the story became clear.

Then, I got pissed.