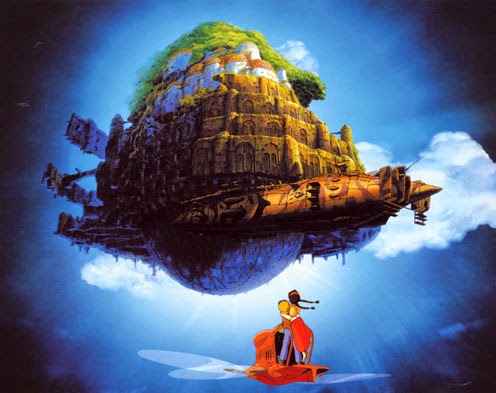 “A young boy and a girl with a magic crystal must race against pirates and foreign agents in a search for a legendary floating castle.”

I was very fascinated by anime in the late 90’s and early days of the 21st century. The medium was going through an especially robust period at the time, where it all seemed very fresh and new to a gaijin—at the time there were, after all, three different shows you could call “space westerns” that each felt radically distinct in their style, focus, concerns and whatnot. Visually and storywise, there was nothing else like it, and while the grim mechanics of commoditization were starting to fall into place, that had yet to full spill over into what was being created and what was being brought to the English-speakers, so even though t-shirts and wall-scrolls abounded, there was still a vibrant sense that the work came before the trading cards. And also, there was a rich history to reach back into (from which Castle in the Sky hails). While I didn’t see Castle in the Sky during this era, it would have fallen right into place with what animated me so about the form—a weird mish-mash of influences pressed together until they form something wild and more than a little magic.
But Castle in the Sky also reminds me strongly of the 80’s heyday of fantasy oddities, the time when I often flipped through unknown channels at someone else’s house, and found some strange, unidentified cartoon from some indeterminate land—in particular, I remember some series, either from Japan or a Germanic country, about a boy traveling across the alpine countryside in the company of a bear or possibly a lion, searching for medicine for his father. In that circumstance, Castle in the Sky definitely would have pulled me in.
While you might expect Castle in the Sky to spend most of its time poetically speaking in the clouds, with its zany sky pirates, military airships, the Jules Verne-an atmosphere, and, of course, the eponymous castle in the sky, the film spends wandering the ground, with the striking, deep cut canyon and the hard-scrabble working class mining folk who live there. Likewise, dreams get mitigated by reality. The savior robot is wantonly destructive, and in the end, the castle in the sky crumbles and falls.
But only mostly. The tree, the natural part of Laputa, remains.

Labels: Castle in the Sky, Miyazaki