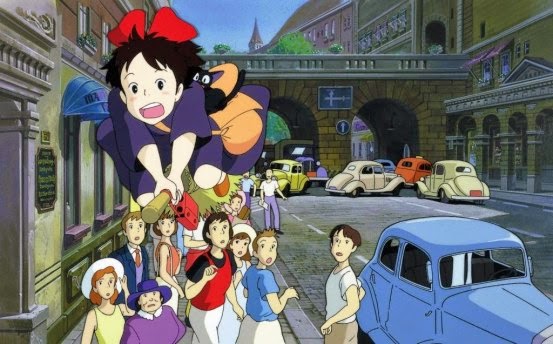 “A young witch, on her mandatory year of independent life, finds fitting into a new community difficult while she supports herself by running an air courier service.”


In the past few days, I read several columns critical of the current trend of Strong Female Characters (as it was always put in capitalized). One, in particular, summed up the issues with an expression of contempt from the writer’s mother: “These days, all the princesses know kung-fu.” So now seems like a good time to discuss female characters, an ever growing concern in our popular culture, and a prominent facet of Miyazaki’s output.
When you think “young witch,” inevitably and correctly you think of Hermione Granger. Now, Hermione is does not fall into the Kung-Fu Princess cliché—she’s a multi-faceted character with seven books worth of development—but she does display the key trait of the cliché, super-competence. It’s well-earned super-competence, of course, as is Katniss’ and Korra’s (it should also be noted that these two are obviously also action heroes, and an action hero who isn’t very good at action is sort of a problem). But Kiki, while she has magic powers and skills, is actually sort of a crap witch. Even at the very end of the film, she’s still comically careening off walls and trees in her uncontrolled broom take-offs (I don’t recall it being said Hermione was exceptional with a broom either, but we never hear she was out of control).
But that’s ok. That’s great, even. While she’s not super-competent, that’s part of the point. Kiki has to rely on her decency, her dedication, her frugality, and her ingenuity to get through the rough start of her year abroad. She puts herself in a circumstance where she has the simultaneously silly and genius idea of using her flying broom to deliver packages, while she also has to find ways to compensate for her deficiencies to make the idea work. And when I say “young magic-user whose decency, bravery, and inventiveness compensate for their inexperience,” who springs to mind?
One of the reasons all the princesses know kung-fu is that the easiest way to give a character significance is to show they have utility, and giving a character skills is the easiest way to show that utility. But great characters don’t just have use to the plot. It’s sad how much our popular culture still falls short of where Miyazaki was 25 years ago.
Posted by Kel V Morris at 8:08 PM