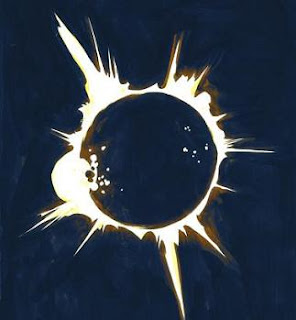 The first show to try for Lost's crown, and fail. Did it fail for just or unjust reasons?

Behind the Assumption: It’s Lost meets the X-Men!
Previous Experience: Mostly, reputation. I knew it was very well received initially, and a joke by the end. But how bad could it possibly be?
Results: How bad indeed. Oh, how I regret those thoughts.
Where to even begin? Heroes is terrible. Staggeringly terrible. But that hardly makes it special. There are many, many, many terrible shows out there, stupid shows, with lame plot developments, and flat dialogue, and aimless characters. No, what makes Heroes special is that its terribleness makes me angry. And it makes me angry because it wasted so much potential, and worse, it wasn’t fun.
Heroes starts off OK—there’s some novelty to a big network drama about superheroes, and some legitimately cool ideas and decent characters. Nate, Bennett, Matt, and obviously Sylar were interesting enough to cover the rest of the crew’s failings. The prophecy paintings made for a neat visual, taking healing factor seriously was fun is a gross way, and who doesn’t love “Days of Future Past”? If you’re going to steal from X-Men, that’s the story to steal. Mysteries got resolved, promised confrontations actually happened, there was a fun dystopian post-9/11 future, and it was, well, varying levels of satisfying and exciting, and at the very least it didn’t waste my time.
I knew it wasn’t to last. I thought I was tough enough to handle it. “To the bitter end!” I told myself, a little eager for something terrible for a change of pace. But I underestimated it. Nothing could prepare me for how awful it would become at the speed it did. As a result, Heroes defeated me. I only made it half-way through season 3.
Such a monument to failure is Heroes, I struggle with where to begin. Diminishing returns? How about returning to dystopian alternate futures three times! Yes, three times. In three seasons. Apparently “Days of Future Past” was the only X-Men story the creators had read. Same with the painting prophecies—three times, the plot revolves around deciphering paintings. Heroes so thoroughly beats its few good ideas into the ground so forcefully, I suspect the writers wanted to see in they’d pop up on the other side.
That’d be more tolerable if the show were populated with characters I enjoyed. But first off, Heroes is ceaselessly dour—you’d think having a superpower might be a little fun, but Heroes feels otherwise—and the modest charms of the handful of good characters cannot combat the wheel-spinning, misguided behemoth the likes of Hiro, Ando, Claire, Peter, Nikki, Daphne, Mr. and Mrs. Petrelli, and likely a dozen others I’ve forgotten. Rather than elevating these problem spots (or, for God’s sake killing one, or two, or all), it appears the mandate was to batter the others down, until everyone was the same grey goop. Bennett and Nate go through the same tensions ad nauseum. Matt chases jailbait because he sees it in one of those fucking paintings. Sylar…God. As squeamish as the show was about killing off dull-ass main characters played by dull-ass actors, it chewed through fun side-characters played by great actors without pity, remorse, or fear, and it never failed to do so in a very unsatisfying way.
Yes, Heroes never met a good idea it couldn’t do in a shitty, shitty way. It had Zachary Quinto as Sylar, a vicious monster with a need to kill, a God complex to match, and an array of powers to back it up. It had Kristen Bell as Elle, a sadistic, sociopathic, lightning-fueled lab rat wrapped in the shell of a perky, immature pixie. It teamed them up. It should have been awesome—evil, super-powered Sid and Nancy, unleashed and cutting a swath of havoc across the nation. Instead, they hooked up, whined about their natures, switched who had a conscience from scene to scene, and finally he off-handedly killed her three episodes later.
“Fuck this,” I said, and removed it from my queue.
Least Sexy Moment: The courtship of Elle and Sylar. It’s  seriously idiotic.
All-Stars Shoe Sighting: None I remember, and I sure as shit am not going back to check.
Posted by Kel V Morris at 1:14 PM