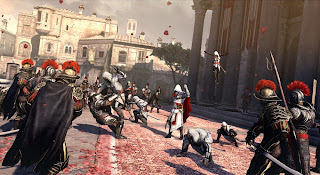 Lists. I don’t know why, but I love them. And if everyone else can do them, I asked myself, why not me? So, prompted by being asked to name my three favorites this year, I’ve elected to take a break from the TV stuff, go two better, and do a top five. Now, we go with Assassin's Creed: Brotherhood.


There are game series I like more than Assassin’s Creed, but I don’t think there are any I value more. It’s the kind of thing that I wouldn’t have imagined I could be playing five years ago. Open world sandbox centered around a predator/prey dynamic and climbing some of the world’s greatest architectural feats, telling two connected stories at once, with off-the-beaten-path real-world historical setting teeming with detail, and a thinly veiled parody of our modern times, built on a timeless theme of determinism and the tyrants, and free will and the rebels, expressed in a centuries-long secret war between the Templars and the Assassins. To top it all off, the series has a set of motifs and iconography making everything both more compelling and cohesive—Animus distortions, the striking design of the Assassin uniform, the eagle cries, they give the games their rich flavor. Without Assassin’s Creed, games would be a much poorer place.
But what of Brotherhood itself? I was shocked to find that what was billed as an expansion that added multiplayer had so much single player to offer. It ties off the story and setting of AC2 (I hope—I value the changing settings and lead), allows more time with some side characters, expands the modern setting, lets you tangle with one of history’s great monsters, features Rome, sadly left out of AC2, rendered in a shocking size and depth, refines the arsenal available, and adds a whole new system that makes you not just a bad-ass, but the lead bad-ass. Recruiting and training a deadly aerie to be deployed across Europe, or kept in pocket to be unleashed upon guards (their strikes, naturally, punctuated with an eagle cry), allowing you to enter the role of the Master Assassin is a new dimension I hope gets more fully fleshed out as the series continues.
But what I have most praised AC for is its bravery—a trait far too lacking in games, which are often all too willing to go for some shocking blast of violence, but otherwise as inoffensive as possible in the same sort of bland, low-level conservatism most blockbuster movies use. AC has a very specific political opinion, and it isn’t afraid to share it. In the midst of the worst days of the Iraq War, the first game immersed us in the Third Crusade, and put the player in the role of an insurgent native, a member of the Hashishin, pioneers of suicide bombing. The series features artifacts credited with causing the Biblical miracles, and aligns Thomas Edison and Henry Ford with the domineering Templars. At the end of AC2, you fistfight Pope Alexander VI in the Sistine Chapel. These are not games unwilling to address the uses and abuses of faith. Brotherhood, however, directly indicts the John Roberts court and the Citizens United ruling—a bold statement alongside the usual “War Sucks But Ooo-Rah Military!” pabulum we’re usually served.
Oh, and the music is pretty sweet, too.
Quasi-Celebrity Appearance: AC stalwart Kristen Bell, who I hope is back for #3...
Purest Moment: Deploying my lethal aerie on a mass of guards.