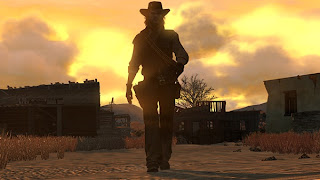 Lists. I don’t know why, but I love them. And if everyone else can do them, I asked myself, why not me? So, prompted by being asked to name my three favorites this year, I’ve elected to take a break from the TV stuff, go two better, and do a top five. Now that the last day has come, it's time for Red Dead Redemption.


I didn’t put numbers on any of these. There’s a sort of implied ranking based on chronological order, but I chose not to set anything in stone because I’m fickle and moody and easily distracted, meaning depending on the day, something could be higher or lower or whathaveyou. Red Dead Redemption is the exception. The only spot for RDR is #1.
Over the years, I’ve gradually moved away from RPGs as my most adored of formats, and toward the open-world sandboxes, and the best of these come from Rockstar. I won’t go so far as to say RDR is better than standard-bearer Grand Theft Auto—it’s too cliché a superlative—but it is a masterful expression of the form. It covers an expansive but detailed world, diverse in landscape and wildlife, that my brain tells me is based off Texas, but my heart says was pulled from my backyard. It tells a unique but classic Western, a story that feels fresh, but winks at its inspirations—The Dollars Trilogy, Deadwood, The Outlaw Josey Wales, The Wild Bunch, works of which I am a big fan, incidentally. Its soundtrack twangs in a style I dubbed “acid Morricone”. It features a cast of such size and diversity, four trailers were released dedicated to their archetypes, a memorable assortment of snakes and stalwarts. It uses them to mine a rich thematic vein, a tale of the men and women who made an era and were ground to dust by the next. It’s melancholy, something games don’t often attempt to be, and it features a true rarity—a denouement. A damn fine denouement, too. And it features a well-written protagonist to hold everything together.
RDR gives me the same sort of hope Heavy Rain does. All of the mechanics and systems and thingies you can do in RDR don’t just exist for their own sake. Hunting animals or bounties, gambling well or poorly, encountering all sorts of insanity out in the wilderness, it all makes a picture of John Marston as a consummate frontiersman—a man perfectly suited to a time that, by 1911, wasn’t simply fading (as it is in the 1890’s time-frame most revisionist Westerns prefer), but was well and truly lost. The game inexorably draws Marston and us into the modern age, starting him off with a revolver and lasso, gradually filling out his inventory with un-cowboy gear like magazine pistols and a semi-automatic shotgun, and forcing him to be driven around by car. By the end of the game, World War I, the moment the 20th century slaughtered and gutted the 19th for good, is on the horizon, John’s place in history is revealed in an off-handed way. It’s not happy, but most of the good Westerns aren’t either.
I played Red Dead Redemption to death and beyond, and I don’t see myself stopping anytime soon. The West may have been won, but there’s no reason for me not to keep dropping into a time when it was lost.
Oh, and the music is pretty sweet, too. But I may have mentioned that.
Quasi-Celebrity Appearance: None, Rockstar doesn't seem to use them much anymore, and when they get such quality performances, it's hard to say they're wrong.
Purest Moment: When the title card splashes across the screen, some 40 hours in.
Posted by Kel V Morris at 8:29 PM