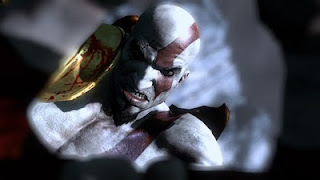 Lists. I don’t know why, but I love them. And if everyone else can do them, I asked myself, why not me? So, prompted by being asked to name my three favorites this year, I’ve elected to take a break from the TV stuff, go two better, and do a top five. Up first: God of War III.


Kratos. What a great character. The rampaging, wrathful id personified, he’s so delightfully dark and pure. So nihilistically true. It’d be miserable to be him, but it’s great, dark fun to pop in and control him for a while. He’s clearly inspired by the same ancient Greeks that illustrated Master morality to Nietzsche. A deplorable person, he is a “hero” in that Greek sense—not a good man in any way, but a powerful one, whose power puts him beyond our reproach. I’ll get to subtle, emotional underpinnings and narratives that push the medium in a bit, but I’d be a liar if I didn’t admit that sometimes a raw power fantasy is fun, especially when they’re executed this well. It’s a great help and service to the character that the game around him aspires to such grandiose and epic heights. The world shakes, the music thunders, the camera swoops, the settings stretch into the infinite, and his enemies equal his rage. Poseidon swells into the frame (a stunning battle that occurs within the game’s first 15 minutes, I should note), rumbling “You dare challenge me, mortal? A god of Olympus?” How can I not say “Fucken A Right, I do!”?
Other games have tried to do what God of War does, but somehow, they always get the alchemy wrong. The protagonist is too silly, the sets insufficiently epic, the setting inappropriate, the combat somehow lacking, something is off. That Kratos walks this delicate balance is remarkable, but even then, not everyone appreciated what he does—he’s sufficiently awful that it can be easy to write him off his games as dumb. They’re certainly not what I’d call smart, but I do appreciate the touches that seem critical of Kratos’ behavior. He may feel aggrieved by his antagonists, but they are no less aggrieved by him. His victims rightly call him out on past slaughterings, inequities, and the overall emptiness of his pursuit of revenge. His actions of the first game lead directly to the conflicts of this one, creating the classic sort of catch-22 chicken/egg dilemma that typifies the Olympians—Kratos is the cause, but the Gods demanded he do what he did. It’s an effort that adds a little depth to the bombast.
Only a little, though. Kratos isn’t given a demigod given to self-reflection. That's much of the fun.
Oh, and the music is pretty sweet, too.
Quasi-Celebrity Appearance: Pretty Brilliant. Kevin Sorbo shows up as Hercules, and Linda Hunt give some awesome over-the-top narration, and Rip Torn make a rare appeal to Kratos' pity.
Purest Moment: The entire Poseidon boss fight.