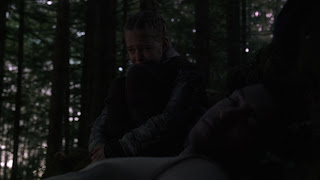 “I guess we are going to have to get used to people dying down here, aren’t we?”