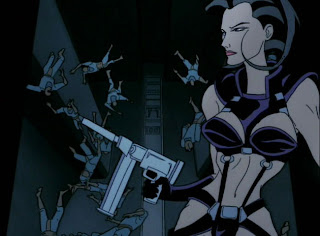 Back on my journey of the lamest self-discovery ever, we come to a herald of the American animation for grown-ups that I and so many dorm-dwellers have been ravenously devouring since the late 90's, Aeon Flux has some big hurdles between us, though. Did I clear them?


Behind the Assumption: Historical status, mostly, as one of the first American cartoons to take anime’s lessons to heart.
Previous Experience: Reputation, and some experience with maestro Peter Chung’s other work. I found it remarkably ugly and pretentious.
Results: The design of Aeon Flux is horrendous—excessively pointy, emaciated, and even by the rock bottom standards of anime, her clothes are ridiculous, and her hair is stupid. I think that’s deliberate, but still. Anyway, it turned out not to matter, because I really enjoyed Aeon Flux, which surprised me based on my previous experience.
Aeon Flux, though, is practically two separate entities. Its first incarnation is its best, a series of shorts, 3 to 7 minutes, notable for their sci-fi surrealism, fluid animation, and challenging structure. They’re silent (no doubt influencing Samurai Jack), strange, tense, clean, and shocking, telling simple, darkly comic tales of the many deaths of Aeon Flux, clearly the distant future’s unluckiest super-agent, usually involving antagonist/lover Trevor Goodchild. Her deaths come inevitably, yet remain a surprise, as we’re never sure when or how they will come—in one, she’s casually offed within the first minute or so of a 7 minute piece. They’re fun and unsettling, with undeniable flair, and seemingly indebted to Roland Topor’s work on Fantastic Planet, which I appreciate.
The next incarnation of Aeon Flux stretches the length and aims for more story (and ditches the crisp brevity of titles like “Gravity” and “Leisure” in favor of “Utopia or Deuteranopia?” and “Reraizure”). Less daring (Aeon doesn’t die as often), less special, the show remains effective. With a broader story canvas, and voices, Aeon and Trevor more clearly delineate their schism in episodes like “The Demiurge”, where Trevor wants to use a powerful alien entity to ensure lasting peace for humankind, and Aeon doesn’t want to risk losing humankind’s freedom. The breach between them in interesting, though, because it feels more like a philosophical spat between a couple than the mortal enemy rigmarole. Both seem to be hoping the other will come to their senses, Trevor especially, and the series ends with them together, journeying thousands of years into the future (after accidentally and jointly destroying the human race, natch). What happened to split them? What were they like before? We never see. There’s a lot we don’t see about the Aeon Flux universe—the show has much more concern for the action of the moment that for continuity or canon.
Audaciously, each episode begins virtually in media res, tossing out what for other series might have been a 5 episode arc in a short paragraph of text at the beginning. What really keeps things going along, though, is Chung’s visual sense. Like I said, I think most of his humans are exceedingly ugly, but he often comes up with fascinating beasties, like the aforementioned Demiurge, or tiny mole-lizard things with exposed spines, or the oddly singing bird-men. I have to admit that, ugly though I find it, the visual style of Aeon Flux is central to its effectiveness. It allowed Chung to tell evocative mood pieces that appealed to adults—an idea he took from anime, and I’m glad he did.
Least Sexy Moment: Gross tongues.
All-Stars Shoe Sighting: None.
Posted by Kel V Morris at 10:23 AM