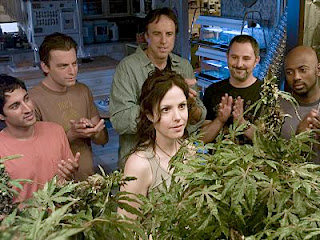 
Behind the Assumption: It’s off-beat, character driven, and has some edge to it, and Kevin Nealon’s pretty funny.
Previous Experience: Nothing but banner ads, to be honest.
Results: There’s a danger in telling a modern-day story—events could occur that cast a new light on your story. For Weeds, well, I’m sure at the time, the idea of their flighty, vapid upper class heroine in a relationship with a ruthless Mexican politician/drug lord seemed both hilarious and logical. Nancy Botwin had thus far used her femininity and the typical ploys of a bored rich woman to navigate the drug trade, and the show had gotten some laughs from the contrast—this relationship was the next logical step. Real Housewives of Orange County meets Clear and Present Danger! Ha ha! In the now, when I’m watching, the drug lords rule northern Mexico, murdering with impunity and turning the country into a warzone. It’s hard to find the humor.
That is just the most reality-pushing expression of the troubles with Weeds—the way Nancy blithely wreaks havoc with no consequences, which the show treats with a wacky, light hand. It seems we’re supposed to regard her as daffy, plucky, and desperate, who gets herself into and out of zany, but dangerous situations. Attempts to imply a darker, more damaging side to her wheelings and dealings remain that—implications.
And I’m willing to bet that worked in 2005, when Weeds premiered—a truly desperate housewife no doubt resonated, and the suburban satire may have seemed ripe. Pot smoking may have seemed transgressive, Nancy, while she was growing, seemed harmless, and the show certainly handled the rise of boutique medical marijuana shops better than Entourage. But why is Nancy’s last resort dealing weed? Ostensibly, it’s to maintain her lifestyle, but this motive gets more and more dubious the more the little world of Agrestic gets fleshed out. Her sons, who she claims to be doing the dealing for, don’t exactly flower there. Kevin Nealon’s Doug makes me laugh, but causes her nothing but trouble, and her best friend Celia is quite simply a fucking bitch. Sitting on the far side of the burst economy bubble, Nancy’s dilemmas seems both needless and insulting.
I did my best to keep highlights in mind. Doug dancing in front of a fountain of sewage. A gaudy megachurch’s cross reappropriated as a grow light. Andy’s well-intentioned but misguided stint as a coyote. Nancy riding the 21st century’s go-to joke prop, the Segway, or the first time she used her femininity to get out of a typical drug-dealer problem. But time had revealed a show about how a rich cunt debased herself so she could remain one. I hear the latest season is heavier on consequences, but it may be too little, too late. It’s not a funny joke anymore.
Least Sexy Moment: There are many. Nancy loves her some ugly hate sex.
All-Stars Shoe Sighting: None! Andy wears what are clearly knock-offs. Nice try.