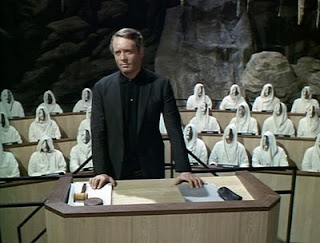 Browsing Instant Watch, I’ve found that I have effectively strip-mined the notable works available. I don’t think I could muster much to say about, say, The Catherine Tate Show, no matter how much Netflix insists, yes, insists it is along the parameters of my test preference paradigm. Along the way of this project, some of my favorites came up. But three shows, three peerless shows, remained unmentioned. Before putting the project behind me, I’d like to discuss these three, shows which, to me, represent the height of the medium, the three to which I aspire in my own writing. The second, a furious, skeptical tale of Cold War paranoia’s end result that speaks with terrible strength to our modern times. Patrick McGoohan’s The Prisoner.

A brief list of shows off the top of my head (many found here, in this very blog!) that can trace their influences back to The Prisoner, first broadcast in 1967: Lost, Fringe, Alias, 24, Battlestar Galactica, The Simpsons, Twin Peaks, The X-Files, Futurama, Chuck, Farscape, Pinky and the Brain. Whenever sci-fi delves into the mind and madness, whenever paranoia and mistrust rule the day, whenever spies grapple with the consequences of a life of secrecy and question their loyalties, you can see the crushing glower of McGoohan’s No. 6 right behind.
The story is recapped with minimum dialogue in the opening credits. A nameless spy resigns in a fury, and returns home to pack a suitcase when he is gassed by mysterious men. He awakes in The Village, a repository for dangerous secret holders. The Village’s cherry, nefarious masters—embodied by a constantly replaced string of authoritarians all known as Number 2—only wish to know why he resigned. They do not get an answer, and the spy is dubbed Number 6. “I am not a number, I am a free man!” he roars. Laughter from his captors is the reply. From there, the series unfolds as the No. 2s array the full might of The Village to break No. 6, and No.6 arrays his full might to resist their efforts and fuck with their world. In 2009, AMC remade the series “for today’s audiences”, a remake that took far more cues from Lost than from the original, with a central mystery to be answered by a broad recurring cast with individual storylines. They shouldn’t have bothered—the original The Prisoner is perhaps more relevant to the post-9/11 internet age than to the Cold War age.
Which side runs the Village? It combines Soviet surveillance with British politeness and whimsy into a Kafka-eqsue stew, but its masters remain a mystery, if they exist at all. One No. 2 explains (in that chummy, British way) that “sides” are immaterial and illusory, only existing to buttress themselves and their power over people—a chilling enough notion at the height of tensions between the Communist and Capitalist worlds, but one that the Patriot Act makes all the more terrifying. The No. 2’s mount assaults against No. 6 on all fronts. They attempt to fool him with elaborate ploys, drug him, infect his dreams, manipulate his loyalties, reinforce his powerlessness, study his every move to anticipate his reactions, and make him question is identity—real fears for individuals in modern societies no matter the era. Is there really much difference between the uncontrollable radio boxes throughout No. 6’s apartment, and Kinect being able to send images of our homes back to Microsoft? Yes: the latter expects us to pay for the privilege.
No. 6 certainly wouldn’t. He remains throughout an iconoclast, and an angry one. The Village makes it clear escape is impossible, which only serves to turn his incredible intelligence toward gumming up their works, which he does with zeal and pleasure. Put in a place when he can trust no one, he doubles down on trusting himself and lets no one else past his defenses too far, no matter how meek and small and harmless they seem. Shouting down a trembling British woman, he can be a tough character to like, but his cunning, perceptiveness, wit, resourcefulness, and his strength of will make him easy to admire. He’s a man with a secret—a simple, pointless secret that he could express in a sentence, and if he shared it, his life could be so much easier. But he doesn’t. Why? Because he shouldn’t have to. Every time Facebook offers to target ads for me, I think of that. Maybe it laughs when I say I am a free man, but as long as I keep clicking No, that laughter is hollow.