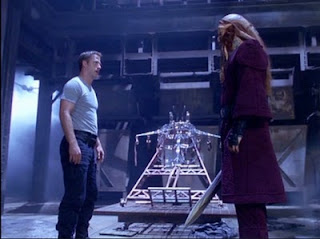 It’s sad that Doctor Who feels to special and fresh by doing exactly what sci-fi is supposed to—show us something amazing. But it’s true—space-travelling shows, when they do come around, try to be cool these days. Rip off Starcraft, but only the human backstory. Don’t do anything outlandish, just put the pretty young cast in flight gear for the promo shot. Sends the signal that we’re for grown-ups. But, you know what, I’m a grown-up, and I still want my alien freaks, dammit. I want crazy aliens with blue skin and 8 foot long tongues, but maybe they can be reformed terrorists, or have unreasonable expectations for their estranged, mixed heritage sons. And maybe they can have freaky alien sex. Thank God for Farscape.
Like Doctor Who, Farscape never met a crazed idea it didn’t like. It’s a show of living spaceships that give birth, doctor aliens who speak in a trill and smell diseases, and oceans of oil set ablaze. At the same time, it’s a more adult venture, so it’s also a show of plant women who orgasm in solar flares, body-switches where the temptation to grope new organs can only be resisted for so long, and dear friends killed by bad decisions.
Farscape is a relative rarity in sci-fi, in that it’s deeply skeptical of human extraordinariness. John Crichton, the lone human flung across the galaxy and surrounded by space Nazis, warrior farmers, revolutionary priestesses, and space skanks, may be brave, smart, and tenacious, but he’s lost in a new land, often mocked or condescended to for his deficiencies, and is unable to remain above the cruel brutality of the universe. He becomes unhinged, reckless, and sometimes cruel himself—a requirement if he is to survive.
But as dark, grim, and bleak as Farscape can be, it never forgets that it takes place in space. And as much as traversing the stars may be a mechanical chore for a galaxy-spanning empire, it’s a marvelous for we simple oomans of planet Earp, and Crichton, as physically and mentally beaten as he gets, still finds wonder in things, and fun in his travels. This is something it feels like many other shows forget, so wrapped up they are in appearing serious. They seem to forget that adults can feel awe, too.