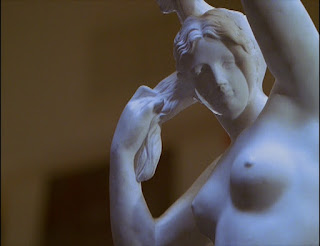 Covering “The Body,” in which our characters mourn like we do.


Per tradition (and the jerk in me is screaming to point out this “tradition” has only needed to be invoked once):

Here it is, perhaps Buffy’s most daring experiment, and the one I return to the least. It’s one of Buffy the Vampire Slayer’s best episodes, and it’s also…well, it’s hardly an episode of Buffy the Vampire Slayer at all. Sure, all our core characters we know and love show much show up, it has those familiar credits, it even aired in the Buffy timeslot on the WB, where I recall it being advertised as a “Buffy special event,” and it eventually got pressed onto season 5 DVDs and then even more eventually bundled onto Netflix, and it’s now available behind that icon that has Buffy, Spike, and Dawn staring out at us on it. “The Body” is immensely powerful, but fragile and precarious. I don’t return to it often because even as well sustained it is in mood and tone, parts of it will crumble under too much scrutiny, ruining the magic a bit. Best to not prod at it too much.
The show has dealt with death before, but this time is different (enough to explain why this time wrecks everyone so much if you don’t think about it for tool long). While everyone’s first question regarding Joyce’s death is if Glory was responsible, but it wasn’t. Joyce’s death was prosaic, and suddenly the universe around them becomes prosaic, too. Their usual quipping and flippancy rings hollow, and there’s no one to fight, and no one they can blame, and no one they really need to save. All they can do is grieve, but they have to do so like us, rather than, you know, people who fight vampires and demons all the time.
Which is why it feels so weak to examination, and yet demands not to be ripped apart. Any quibbling over how, say, it feels weird that the paramedics leave so quickly, will just seem empty and petty in the face of the raw emotion here. Does the episode sometimes strain a little too hard for artfulness? Sure, a little bit, but that’s also a key component of the mood. Are everyone’s reactions congruent with what we know of them? More or less, especially in the mundane world of this episode, where Willow realizes most of what she owns has silly crap all over it (allowing the show to sneak in the first show kiss between Willow and Tara), which is full of people going about their humdrum lives save, of course, for one.
No, it seems too raw to comment upon too much. Joyce is never having fruit punch again, and everyone, us included, just has to live with that. Sometimes we don’t know what we’re supposed to do, because there’s nothing to do.
Posted by Kel V Morris at 11:51 PM