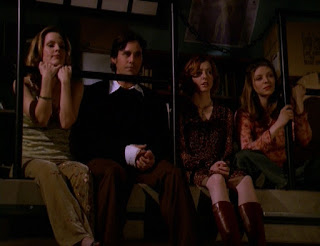 
I was a little premature in my gloomy assessment of the rest of this venture. None of these are classics, exactly, but, you know, there’s appeal here. In fact, way back in season 2, I prophesized there would come a time when episodes would get by on cherry-picked fun character moments, and that time has now come to pass.
Case in point is, well, “Checkpoint,” a pretty pointless (by design) story that exists to give a key bit of info at the end, so it’s basically a lot of stalling until Buffy figures out that she actually has power over the Watchers, which they are trying to hide with their swaggering and showy tests and reviews. But, you know, the tests are fun, what with Buffy not knowing Japanese, the Watchers being star-struck over interviewing celebrity vampire Spike, Willow and Tara escalating their proclaimed relationship from an awkward and halting “friends” to a strident and umbrage-laded “gay lesbian type lovers!” only to realize the question pertained to the Slayer, and, of course, the genesis of Anya Christina Emmanuella Jenkins, born on the 4th of July to both a mother and a father, our little patriot. The ending, of course, is that Travers reveals Glory is a god, which, well, we can discuss that later when the troubles with that reveal are more apparent. I remember it was a pretty cool reveal at the time, and it still feels pretty cool today, even if, you know, it isn’t. But, spoonsful of sugar.
That’s something “Blood Ties” sure could use more of. It’s another Buffy Birthday Disaster, except once again it’s particularly disastrous for Buffy herself. This time, it’s mostly Dawn’s disaster, which means, yes, once again it’s mostly exposition as Dawn discovers she’s the Key and runs into Glory, who wants the Key and we see shares a body with Ben the Intern and on and on and on it’s really hard to care. There’s a solid attempt to reach for some deeper sentiments and how upset Buffy is by Dawn’s reaction, and while Buffy cares about Dawn a lot…we really don’t. So her over-dramatic self-harm invoking confrontation comes off more as empty provocation than a terrifying breakdown. And the Glory stuff is certainly there.
Simmering for most of the season has been Spike’s fumbling and challenged efforts to replicate his human act at the end of “Fool for Love,” prompted by the realization/confusion of his feelings for Buffy. Basically, Spike wants to be a Good Guy, but as hinted as far back as “Becoming, Part 2,” his askew moral compass makes that difficult, and just in case you’re unsure what makes his efforts so faulty, Tara has some really, really on-the-nose thoughts on Quasimodo for you. At heart, Spike just doesn’t know his place in the world, and the convenient arrival of Drusilla in town in “Crush” gives him the chance to force the matter, the two poles he’s torn between also conveniently represented by his two loves, Drusilla and Buffy (with Harmony, to his regret, forgotten), and in the end, he finds himself exactly where he started, but even more alone. “Crush” is fine, perfectly watchable, though it isn’t especially surprising and is a bit rote—I mean, Tara does straight up explain the episode while just randomly talking about The Hunchback of Notre Dame, which isn’t exactly college reading. Looking at the long game, though, it was necessary for Spike to reach rock bottom at some point, and a little more Drusilla is always welcome. Like I said, I still pull for those crazy kids.
For her part, Buffy is confused and more than a little freaked out when she learns of Spike’s feelings for her, wondering aloud more than once if they are her fault, if she somehow did something to cause them. And then in the form of April the Robot, she gets something of an object lesson.
What’s this show’s deal with robots? I mean, yeah, they’re sort of staple of the B-movies and comics Buffy was riffing on, but still. Anyway, of what we might call Buffy’s Robot Trilogy, “I Robot, You Jane,” “Ted,” and “I Was Made to Love You,” this is without question the best. It almost has to be, doesn’t it, because it’s not a woe-begotten atrocity? Anything disagreeable about this episode has more to do with what the character of Warren becomes later which, believe me, will come up. On its own, this episode (it’s a mouthful to type, so I’m not doing it again) is agreeable and inoffensive. Buffy comes away from her dealing with April the Robot not only with the critical insight that she needs be more than obsessed with the idea of being in a relationship, but also with the realization that there isn’t reason or ration behind love, it’s inexplicable and uncontrollable, and thinking you can control it is more than a little wrong.
Through these episodes, you might be lulled into thinking the story of Joyce’s medical condition is over, and the end of “I Was Made to Love You” confirms that it is, though not in the way you were lulled into thinking.
Posted by Kel V Morris at 9:05 PM