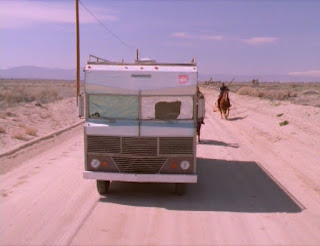 Covering “Spiral” and “The Weight of the World,” in which things escalate to the breaking point.


So. Ok. So.
There are all sorts of contracts one enters with a work. Suspension of Disbelief is the one we all know, but that’s a very imprecise phrase and concept, especially when we’re talking genre efforts like Buffy. Something more like “Willing Acceptance” seems to fit better when it comes to the extravagancies of genre, because it’s not like I’m temporarily pretending that the Soviets had a secret fish man project, but I am accepting that Buffy has to deal with the remnants of one.
The Knights of Byzantium are a bridge too far, though.
I mean, obviously the idea of Buffy fighting a bunch of guys on horseback proved irresistible to the creators (and, if the quality of fights in these last few episodes is an indication, a pretty big strain on the budget), but they’re just too silly and raise far too many questions of the purely functional variety. Mainly “Where the fuck did these guys come from? Are they supposed to be from the same vague Europe as the Key monks? If so, why do they all speak ye olde tyme diction with American accents? How did they get into the country with their horses and chainmail and spears and swords, and how did they manage to do so with so many numbers? Seriously, they’ve got chainmail and cowls and face tattoos and shit, no one noticed? They’ve just been chilling and illing around the same tree where they fought some of Glory’s lame henches earlier, an entire army of them? They’ve got fucking clerics? Really?”
As fun as the idea of Buffy fighting knights atop a speeding Winnebago is, in practice the Knights are just way too silly, even though the sequence is pretty good. Spike, again, cuts to the quick in calling them “role-playing rejects” (and the dude who calls for “Clerics!” doesn’t help). They’re also pretty pointless. Mostly, they exist for the sake of that action sequence, and the ensuing siege, and once they’ve done that, Glory just kills them all.
What they also do, or more specifically their general does, in the midst of another long exposition scene, is hint at a wider world of factions in Earth’s war with the supernatural, in which the Slayer and the Watchers are just one of many. As explained, the unnamed Key monks thought they could make use of the Key for the forces of “Light,” and obviously the Knights disagree. This is cool, the idea that Buffy and crew are not alone, but the world is populated with orders and brotherhoods, guilds, leagues, and societies all with their own histories, specialties, and cool names is neat. Unfortunately, it’s really just that line.
Which is par for the course in this latter end of season 5, and these episodes in particular—ideas, concepts, and themes that could be very powerful and effective, except they’re half-handedly tossed in, not referred to again, and surrounded by a whole bunch of contrivance and silliness. Case in point, Glory takes Dawn which causes Buffy to slip into a catatonic stupor, an outlandish development that does not jibe so great with Joyce getting CAT scanned and having hushed meetings with doctors in waiting rooms earlier this very season. This rather contrived state feels more contrived because, as we see when Willow magic trips into her head, Buffy is dwelling on her memories of Dawn being brought home from the hospital, which, and not to sound like a broken record but it bears repeating, is of dubious existence, and another where she says she, for an instant, wanted to give up. It’s deliberately banal, so as to hide its significance, but it’s almost too banal. I can’t help but feel we should have seen that moment in some earlier episode, only to have its significance revealed here. Anyway, Buffy’s whiny, drama-farming, guilt-fueled catatonia is not too convincing, summed up by Willow dismissively chiding Buffy to “Snap out of it!” If this were more convincing, that probably would have been a great moment of subversion, but as a capper of a story clearly designed to stall for time, the only response is “No shit.”
Did I mention we’re still getting rules piled on? We are. Turns out only human beings forget seeing Ben transform into Glory and vice-versa. It’s not that this is too complicated, it’s just annoying that we’re wasting time with it.
But Ben is also one of those half-hearted elements of the season, which come to a head in “The Weight of the World,” which tries to invest him with some pathos and sympathy, but the dude is such a non-character it’s impossible to care about his plight beyond thinking “That would suck,” or to feel much of anything about his and Glory’s struggle or his inevitable acquiescence to her wishes. Not for nothing, but the Knights have apparently been searching for Glory’s human prison for generations, but Ben’s only in his late 20s, so…what up with that? Anyway. Glory briefly, very briefly talks to Dawn about the transient nature of their current state—“Being human is a costume for girls like us” is roughly how it goes. It’s another intriguing concept they just brush on by.
Oh, and Xander and Spike (who do get a pretty good scene together) do actually discover that Glory does have worshippers beyond her inept and irritating scab-things—she also has a demon who looks like a benign old man and has wildly vacillating power, being able to best Spike, but unable to stand up against the combat prowess of Xander. On top of all this, Giles makes a stunning recovery from being impaled, going from death’s door to just fine over the course of an evening.
It’s all pretty sloppy, if you haven’t gotten the idea yet.
Posted by Kel V Morris at 6:55 PM