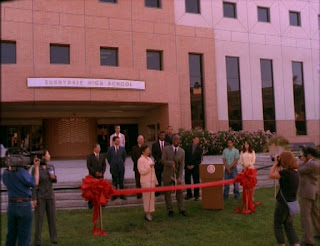 Covering “Lessons,” in which the show returns to old forms to revitalize, but some bad omens have already arrived.


I can see the end of my venture, just on the horizon, beckoning and taunting me to come for it. “You have come so far,” it coos, “and now you are so close. Reach out, enter my embrace. I am here.” But the hardest part, I fear, lies between us.
“Lessons” kicks off season 7, the final season. Was that known at the time? I’m honestly not sure and don’t remember. On the one hand, the changes to the status quo seem designed to get the show back on a firm footing of what worked in the past, and could fuel it for, in theory, three more seasons if necessary. But on the other, the villainous speech at the end (for the first time since season 1, we meet the baddie in the first episode, even if we don’t know their nature just yet) speaks of returning to the beginning with an ominous finality.
When Buffy began, the high school was the most important setting the show had, but one which the clever one season per school year structure had forced it to leave behind. But attempts to deal with that change (which, it’s interesting to note, encompass more than half of the show’s life) have been, well, a bit rough. While college afforded a few new sorts of stories to tell, the fact that two of them in the same season involve haunted frat houses isn’t a good sign, and after that, they opted to go with nothing, which gave the show an increasingly insular and limited atmosphere. So, in a clear effort to rejuvenate, Sunnydale High opens again, this time with Dawn attending, Xander working the construction site, and eventually Buffy hired on as…something. The intent is clear—get everyone running around the halls of a school again. Dawn even ends up with a hip-to-the-times updated Willow and Xander of her own in the form of a sulky goth girl who is 5% goth at best, and a Latin kid who smokes (possibly the first of note since the Incan Mummy Girl, an impressive feat for a show taking place in California).
The story, though, shows a clear intent not to simply rehash what worked in the high school years, but to let those years inform events. As such, the revenants haunting the school aren’t any old ghosts or vengeful spirits, but are the remnants of people who died during Buffy’s tenure. It is, actually pretty cool, and feels much more spritely than the show has been in a long time. Combine that with Spike’s mysterious condition, the strange entity at the end who tours through the big bads of yesteryear, a studly but possibly evil new principal played by the lesser Palmer, and just how bright and good everything looks. Why, then, do I feel so down?
The issues aren’t things easily pinned down, but they’re present. They’re in scenes that are supposed to be funny and somehow aren’t, and in speeches that are supposed to be heartwarming that are cold. While the bright colors, expensive halls, and simple enough supernatural story that’s actually scary all look like a show revitalized, it doesn’t feel like it.
What brought back vivid and visceral memories of disappointment came at the episode’s very beginning, in a scene that, again, looks like it should be funny and fun, as Buffy trains Dawn in the cemetery. Dawn’s awkward and fumbly, and hopeful that maybe this vampire, being new, won’t know Kung fu, and he gets stuck on a root trying to climb from his grave, and Dawn misses the heart on her first try, all the self-aware stuff that made Buffy notable in the first place. Yet the whole time, Buffy is stuck delivering this lecture about the nature of power. Yes, season 7 is the season of Buffy the lecturer, as the first scene reminded me, also serving to remind me that the return to high school would be fleeting (I don’t think Dawn’s Willow and Xander appear again), as the season moves away from that and into a bizarre war story.
This is the ultravampire in the room. Season 7 aired from 2002 to 2003, and while it may be a coincidence that Buffy decided to start telling a war story where Buffy is the Decider at the same time the US was getting geared up to invade Iraq, well, I think we’re starting to realize how our culture went a bit insane in those days.
Case in point is the sourest note of the episode, when Buffy confronts the vengeful spirits. They’re, as noted, vengeful, dangerous, full of ill-intent, and attacking Dawn, but still, they’re all people Buffy couldn’t save. And she only gives the briefest, most cursory acknowledgement of that, but she’s mostly contemptuous and dismissive of them. It seems very off for the Sunnydale Class Protector to dismiss the fact that she couldn’t protect everyone. I get the feeling in 2015, as we come to terms with how profoundly we were led astray in those days, notes like this will only get more sour.
The end is near. And it’s never been further away.
Posted by Kel V Morris at 11:01 PM