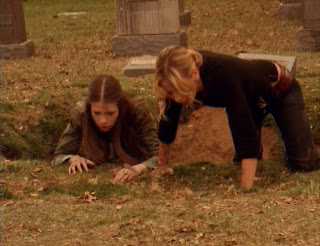 Covering “Grave,” in which the show celebrates the end of season 6 by going full on Final Fantasy.

Apex Episode: Intellectually, I know I should say “Once More with Feeling,” but my trolling fingers keep wanting to type “After Life.” Of course, if they really wanted to troll, they’d say “Doublemeat Palace.”
Nadir Episode: Well, between “Hell’s Bells,” “Normal Again,” and “Entropy” I dubbed “Normal Again” the worst, but you know, in a way, they’re all winners. And on reflection, perhaps “Seeing Red” ought be the nadir, assuming it’s not too paradoxical to have a nadir that is not the worst.
Season 4 Costuming Theory Check In: Nothing stands out as bad as season 4, though it was funny to notice that Anya’s outfits seem to be shrinking while Xander’s keep expanding.
Posted by Kel V Morris at 10:48 PM