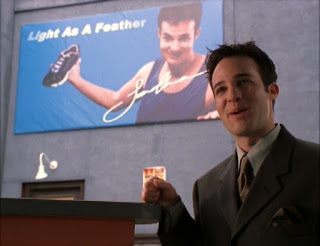 Covering “Superstar,” in which the cosmography expands with the introduction of the most hellish dimension of all: the World Without Shrimp.


Let’s reel back, and talk a bit about Jonathan.
High school cliques are not the simple demarcation line between the cool and uncool presented by so many 80s movies. There are many strata within them. While the Scoobs were presented as the freaks, the geeks, the losers, and the outcasts, not regarded as cool on the level of the Harmonys, Percys, and switch-hitting Cordelias of the world, but they were hardly the bottom of the pile. They also had the benefit of being played by Hollywood actors, with stories written for them by Hollywood writers, so they got to date soulful vampires, head cheerleaders, and bassists (Cordy and Oz sort of get the short end here) while fighting their nightly war against evil, so at least partially, the idea that we were watching the self-esteem deficient weirdos required a little suspension of disbelief on our part.
Jonathan, though, was the bottom of the high school pile, the real loser. Easy not to notice, easy to forget, and easy to ignore, short and rather shlubby, he was perpetually a victim, whether of cruel jokes or monstrous carnage. One of the ingenious things about that episode is how it forcibly redefines his role. Myself, I’m pretty certain I didn’t know Jonathan’s name when “Earshot” started—he was one of the background guys the show reused to make the school seem consistent, rarely doing anything more than looking panicked and not speaking, and I probably thought of him as “that nerd Harmony used to mock Cordelia in ‘The Wish’”—afterward, though, he was Jonathan, and going back through the older episodes, every time he showed up (in, apparently, nine episodes), I thought “Oh, hey, there’s Jonathan.” Accordingly, he seemed to become the show’s concession to real loserdom, which is why his story in “Earshot” is starkly real (his absurdly inefficient choice of a suicide weapon not-with-standing). And the show had real sympathy for real losers, so he is seen briefly at prom, gives Buffy the Class Protector award, and even gets to tackle a vampire and survive graduation (the latter being the real feat, ATC), though it didn’t just give him everything he wanted.
So in “Superstar,” he tries to take it.
It’s another return to everyone trying on a new persona, though this persona is just “agog over Jonathan.” Still, it prompts everyone to act silly, a joy the show was always eager to revel in, and this time, the show itself also adopts the new persona with a groovy spy score, an extra zing of theatricality to everything Jonathan does, and new credits featuring his many feats as the Most Interesting Man in the World. This is what the episode is best known and rightfully beloved for—the density of the jokes, how multifaceted and thorough the spell that makes Jonathan is, such that Tara and Willow erect a girly shrine to him and both Anya and Xander are thinking of him during sex. Internet inventor, star of The Matrix, medical doctor, owner of fine suits, the Pentagon’s big gun, swimsuit calendar model, central figure of the Swing Revival (man, remember that?), possessor of a real website(!), expert marksman, Class Protector of Sunnydale High, paramour of Swedish underwear model twins, coach of 1999 FIFA World Champion USNWT (who in our reality need no augmentation spells), and the guy everyone goes to for help, whether that help means fighting some monsters or working through some thorny and complicated relationship issues.
Notably, the conception of cool in “Superstar” is very pointedly not mean—despite the example of Harmony and Percy, Jonathan’s cool is the exact opposite of mean, and that last trait or aspect I listed seems the most important. It isn’t clear how much control Jonathan actually had over the spell, but it seems like the core of it is a desire to be sought out for assistance, and to be able to provide it. The advice he gives to both Buffy and Riley to help them through their post-Faith issues is good enough to work (indeed, their issues were complicated enough only magic would have provided them the means to work through them). Even as everyone’s memory of augmented Jonathan fades, Xander still wistfully recalls not that Jonathan was cool, but that Jonathan made him feel like he was cool, too. While Buffy rightfully chides him at the end for making everyone his pawns (Buffy is first to perceive something is wrong with this status quo because she senses she’s diminished, but also amusingly because she’s a bit vain), it is a bit poignant that a big part of the fantasy life he constructs involves making people feel good about themselves.
An unintended monster, all the bad to counterbalance Jonathan’s good, brings the fantasy life crashing down, and while Jonathan doesn’t exactly rush to bring things to an end, he doesn’t impede Buffy either, even though everyone expects him to. There’s a very rote bit where he may contemplate trying to throw Buffy down a hole or the show may just want us to think he does, but he’s quickly encouraging Buffy to remember how to fight, and even throws himself into the aforementioned hole to get the monster. In this way, Jonathan aligns himself not with the long line of idiots who dig down into the mystical and don’t realize they should stop digging, but with someone like Xander, who recognizes when they’ve screwed up and helps fix it (even if he recognizes this much later than Xander did). Jonathan was a sad guy whose pain led him to make some poor choices, but he wasn’t malicious.
Kinda wish the show kept that characterization in mind.
Posted by Kel V Morris at 8:09 PM