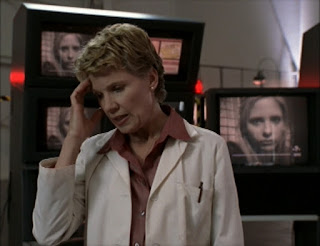 A Separate Tribute: “A New Man” marks the final appearance of Ethan Rayne, which is really too bad. Ethan was a great spice to throw in, tied directly to the show’s earliest strongest non-Buffy character, and just all around a delight: wry, cowardly, and droll. His observation in this episode that the “stay-and-gloat” that fails him is great. I wish the show had been able to make more use of Ethan, but it was not to be.
Imagine my surprise, years after Buffy ended, when I discovered the actor who gave Ethan so much life had turned up in not one, but two media I truly adored, both from the Bioware game studio. And I didn’t even realize it, until I was told. Actor Robin Sachs contributed his gravel to both Dragon Age and Mass Effect. If you asked me to name two series I could play forever, both make that list.

Robin Sachs died on February 1, 2013. I, and many other Mass Effect fans, marked the passing by only using the iconic gear of the character he voiced, by way of tribute. Since Ethan doesn’t pass here, I didn’t give him the full tribute, but I felt I should honor Sachs again. From Buffy the Vampire Slayer, to Dragon Age, to Mass Effect. You can think of a more prestigious path, but a cooler one? No.