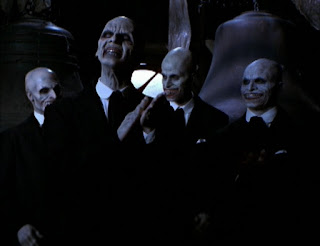 Covering “Hush,” in which everyone has mouths, but they cannot scream.


What to say about “Hush?” It’s, quite frankly, the best. “Hush” is so good, its strength alone elevates the entire season in my esteem. Some of its comedy is as funny as the show will ever be, and its horror is definitely the scariest the show will ever achieve. Once it gets rolling, it is utterly arresting and compelling, even or perhaps especially through scenes I might normally tune out a bit. There’s a great deal of cleverness in its simple, disconcerting concept, and it’s a very rare example of an episode that is (despite any theoretical and incorrect dissenters, whose existence I find very much in doubt) regarded as the best, is my favorite, and is a great choice for an introductory episode. There’s even historical significance! A lot of it, if you count the fact that I’m pretty sure it’s the first episode I saw fully. When I’ve chosen to rewatch an episode or two in the past, “Hush” was usually one of them.
A little real talk for a minute: despite appearances, Buffy very rarely sustains real horror. Horror is a part of the show, no doubt, but as I’ve said before, the show gets most of its heart from creature features, and genuine horror is pretty rare—“The Dark Age” and “Helpless” being two prime exceptions. Resultantly, the BtVS bestiary is, well, it’s more than a bit lame to be honest. Demons tend to be stuntmen in honestly usually pretty good rubber masks with demonic sounding names you quickly forget, who are unlikely to ever recur. The Gentlemen stand apart in this shallow pool by being well and truly awesome in every way. The alien way they float, the creepy elegance of their design (Slender Man a decade before he was a glint in a Creepy Pasta), the genteel, silent conversations they share, and, of course, the way the isolate their victims by isolating everyone in town.
In this way, the Gentlemen remind me most of the best modern-era-created Doctor Who adversaries, the Weeping Angels, the Silents, and the likely non-existent Hiders (creatures which appear, or don’t, in “Blink,” “Day of the Moon,” and “Listen,” also all top-tier episodes. Coincidence?). They, like their peers from the BBC, begin their attack exploiting or denying our senses and perceptions, rather than leading off with big claws and teeth. All the Gentlemen need is a scalpel, they’ve already stopped us from calling for help, and hearing the call both. All we know about Tara is that she’s in the Wiccan club and might have a stutter, but her desperate escape from the Gentlemen is nothing less than terrifying.
They even get a great musical cue.
Oh yeah, Tara shows up. I’m calling that historically significant, as if memory serves, the Willow and Tara relationship is considered an important one in mainstreaming portrayals of homosexual couples. I’m pretty sure when I first watched “Hush,” word had spread far and wide that Willow was gay, so what was going on there was pretty clear, but in a vacuum, I suspect those cards are held pretty close to the chest, possibly as demanded by the powers that be. Tara is quite obviously into Willow, but Willow seems to need more time to have some realizations about herself, even if their joined spell power has already spoken a truth she isn’t ready to express, and may not even realize at the moment that it is the truth.
This is the undercurrent of “Hush,” roiling about beneath the chaos and fear that ensues from Sunnydale’s silence, the things our characters can’t say just yet, don’t want to say, or just plain don’t know how to say. Early in the episode, Xander is arguing with Anya (who, it seems especially significant in an episode where everyone loses their voices, overshares), because she feels he doesn’t actually value her beyond their physical relationship, despite his protestations, because, as her lack of differentiation between public and private conversations indicates, words are fairly meaningless to her. Voicelessness creates a comic misunderstanding involving a blood mug, dropped books, and Anya napping in such a way that isn’t very good for her neck that gives him the chance to show the depth of his feeling in a way her nascent understanding of relationships grasps. Also, pretty funny.
But there’s also Buffy and Riley, now both quite obviously into each other, but reluctant to act because of the secrets they’re unwilling to speak (despite, in Riley’s case, Forrest pushing him to bank on his undeniably cool job), a situation hearkening back to their park bench encounter in “The Initiative.” But their silence cuts through any dissembling they might normally attempt. They kiss first, but that only seems significant in that it makes things more complicated when they encounter each other fighting demons without any way to make excuses. And since they can’t make excuses or talk about anything at all, all they can really do is their duties without distraction. Turns out, they’re a pretty effective team.
The fallout of that revelation, however, has to wait. The more immediate consequences fall to Giles, whose special lady friend…uh…Olivia? Olivia. There isn’t a whole lot to say about Olivia, she’s had literally one other appearance, and their history only gets sketched out in a line or two, so as many times as I’ve seen this episode, I always forget that Giles’ booty call in there for it (take all the umbrage at Anya calling her an “orgasm friend,” dude, a Transatlantic booty call is still a booty call). I think everyone realized, after they started giving Giles a new relationship not only did he not really need one, but not matter what they did, they weren’t going to improve upon his last one.

Costuming Alert!: See? The extreme backless thing looks weird, especially as a long-sleeved…shift? Shirt thing, and with drawstring pants. Also, the age discrepancy between the actors and their characters has been a variable issue (Charisma Carpenter never looked 16—I’m pretty sure she just one day became 25, and will stay that way until we’re all dead), and it will only get worse, but this hairstyle, which quite cool, isn’t helping Emma Caulfield sell herself as a 19 year old. Or a 1000 year old who got stuck as a 19 year old. Whatever. 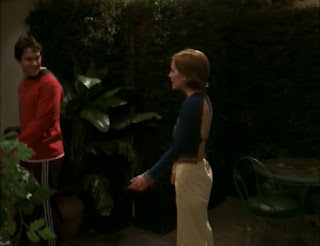