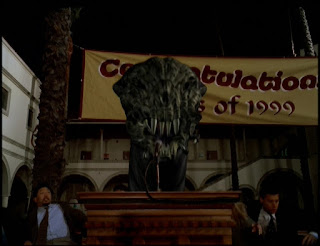 
On the subtle metaphor spectrum, the gang blowing up the school on graduation day falls pretty heavily on the unsubtle end.
It’s also pretty delightful.
The final act of “Graduation Day” may not have the operatic, tormented grandeur of “Becoming,” but it makes up for that by being really fucking cool. I mean, it’s a battle! A full-blown battle! With flame throwers and bowmen and multiple fronts! Things don’t end so hot for Larry, or Harmony, or Snyder, but Jonathan makes a flying tackle and Cordy stakes like a pro. Even well after all the poor LOTR imitators (stay tuned!) gave me some pretty hardcore battle fatigue, this is still exciting as hell. One big factor is that the show didn’t give the pre-battle speech to the hero, but the villain—the most thinly-veiled threat-leaden commencement speech in history, complete with evil stare-down. “Some people who should be here today aren’t. But we are.” Awesome.
That speech begs the question of where the Mayor stands in the Buffy villain pantheon. In my memory, he was the best. Or my favorite? More than likely, I didn’t make such a distinction. It’s not like the Buffy rogues gallery overflows with greatness—when we’re talking “greatest” of the season long antagonists, we’re really only talking the Whirlwind (that is Angelus and Dru and Spike), and the Mayor. Anyway. Where does he stand now? Well, he’s the most cleverly conceived, but the personal connection of Angelus makes him the king.
I’ve seen the Mayor described as the banality of evil, but this is a huge mischaracterization. The Mayor’s evil is not banal, but he is banal in it—his belief in the power of milk and miniature golf funny but creepy flourishes that give him a pretty memorable personality. He’s a suitable mastermind figure, but also a rather odd one, as his villainous scheme is basically in its endgame when we first meet him, and while the Ascension is arcane enough to be mysterious and shocking, there isn’t actually all that much to it—there aren’t really schemes to be peeled back like the layers of an onion, and it falls to Anya to convey the horror of such an event (mostly through the fact that she’s eager to flee it). But there is so much else going on in the season, with the Council, with the love quadrangle, with the returned Angel, with Faith (both before and with the Mayor), and it’s all so good and interesting, the Ascension doesn’t feel thin at all.
There’s also, of course, his relationship with Faith giving him depth. While it has a twisted similarity to Buffy’s relationship with Giles, it’s a mistake to think of it as paternal love, even though he certainly is grieving when Faith is in a coma, and Buffy exploits that relationship to lure him to his downfall. No, while Wilkins probably thinks he has a father’s love for Faith, he doesn’t—he’s too manipulative and emotionally abusive. While he gives her the praise she loves and the stability she has long desired, he’s constantly reminding her not only is it in his power to take that all away, he’s always on the precipice of doing so. And, of course, he’s always eager to compare her to Buffy.
It’s been asserted that Faith is Buffy’s dark side (Buffy even once said she could have been Faith), but this is another mischaracterization. Faith is Buffy’s foil, no doubt, but it gets just a bit too counterfactual to get there. If Buffy didn’t have Joyce, and if she didn’t have Giles, and if she didn’t have Willow and Xander and Oz, and if she didn’t have Angel, and if she felt there was no one she could really trust, and eventually you just have to say, yeah, if this character were totally different then she might perhaps be this different character. But Buffy is totally Faith’s light side.
All of those things you’d have to take from Buffy to hypothetically make her Faith are things Faith wants, and trying to get them for herself keeps leading her to fall under the thrall of the Gwen Posts and Richard Wilkinses of the world. Her bitterness over Buffy’s privilege comes up a lot in their confrontations. And the yearning for what Buffy has hardens her against Buffy such that she seems almost eager to take what she has away, particularly when that thing is Angel.
The Mayor’s final gambit to keep the Scoobs occupied until he Ascends is to imperil Angel’s unlife, and it proves way too effective, basically showing exactly why Buffy and Angel need to break up. Buffy essentially goes crazy for a while, bringing any research or planning to a screeching halt while she frets, resolving to kill Faith when she learns the cure to his poison is Slayer blood, and then finally beating on Angel until he drinks hers. For his part, well, Angel doesn’t drink until she’s dead. Barely.
In the end, though, Buffy lets Angel walk off into the smoke. She has to grow up sometime, and it may as well be on graduation day. All our young leads show some level of their just-taking-root maturity over the course of the episodes, but none more so than the Class of ’99, who finally decide to stop letting the little blond girl save them all the time and choose to do something for themselves.

Apex Episode: This whole season is ridiculously strong, but I’m forcing myself to pick, so…it’s either “The Zeppo” or “Doppelgangland.” The former is better directed, the latter has Anya trying to get a beer…fuckit, I’m not picking, it’s one of those.
Nadir Episode: We’ll go with “Amends.”
Season 4 Costuming Theory Check-In: I’ve highlighted a few excesses, but they are mere signs of things to come.
Posted by Kel V Morris at 1:34 AM